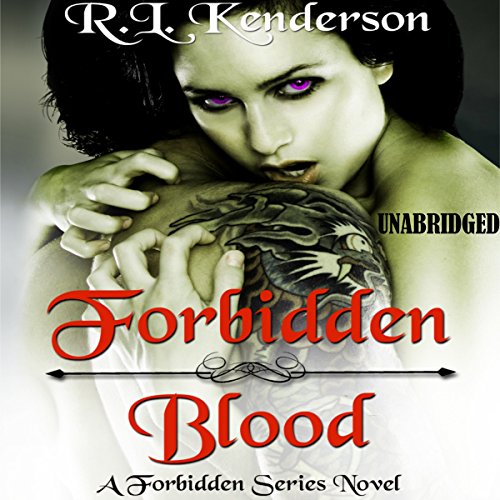 A repressed vampire princess. A handsome stranger. A forbidden night that changes everything.

Next in line to lead the vampire species, Princess Naya Kensington has always abided by her royal responsibilities. At the urging of her best friend, Naya breaks the rules and crosses the line when she goes to a human nightclub. Following a chance encounter, Naya alters her life with a singular act forged from lust and blood.

Vaughn Llewelyn has secrets and obligations of his own, but he ignores them when he spots Naya across the nightclub. He wants her in a way he's never felt before, and although he can't possibly have more than one night with Naya, he knows no one else will do.

One night of forbidden love creates a bond that will forever change both of their lives...as well as their worlds.

Forbidden Blood is the first book in R. L. Kenderson’s steamy paranormal romance series. If you like alpha males, spicy supernatural creatures, forbidden love, and hot sex, then you'll love the first installment in this pause-resisting series. Get Forbidden Blood and enter the seductive world of the forbidden today!

What listeners say about Forbidden Blood

I love paranormal stories! If you like Vampires and Shifters's stories, you should like this Series. Their World, described by R.L. Kenderson, is different than what I've listened before and I loved it! This was my first R.L. Kenderson's book and won't be the last! Forbidden Blood is the first book in this steamy paranormal romance series and this story is so much more than what I have expected! I was hooked from the first page to the end. I love the main characters, Vaughn and Naya. Their chemistry is really strong and steamy! The secondary characters are also very interesting. This story is well written, entertaining and captivating, filled with twists and turns. The Epilogue is beautiful. I can't wait for the next book in the Series. The narration was really well done and easy to listen. I received this free review copy audiobook at my request and I have voluntarily left this review.

Once I started I didn’t want to stop listening! This story is captivating and sucks you in. It is sexy and dramatic with a bit of an unexpected twist. Vaughn is a very sexy alpha male with a sweet side when it comes to Naya. Naya is a vampire princess who choses to be untraditional and independent. She meets a sexy stranger in a night club where vampires should not be and things get a bit heated. One night of passion changes both their worlds!

It was a struggle

I struggled to finish it. I have the book and forgot the amount of repetition for the word "however"
almost couldnt finish it.

My Thoughts on Forbidden Blood

This was a really good kick off to a new paranormal romance by R.L. Kenderson.

I loved this take on the supernatural world in which humans, shifters, and vampires all live together in the world. Even if they didn't all know about each other. This story had royalty, suspense, a mystery to solve and danger. And of course it had romance. Lots of romance and I loved every moment of it. Some of the dialog came across as a little old fashioned or not quite modern in the phrasing but it wasn't anything that made me dislike the story, it just occasionally made me pause.

I had the pleasure of listening to this story as well as reading the ebook and it enhanced the story for me. The narrator was a new one for me but she did a great job. There were a lot of characters to voice and I feel like she did a good job with it.

I look forward hopefully getting more of this story in future.

I love Naya and Vaughn! Without giving away any spoilers...She's a sheltered vampire princess and he's a hot (supposed) 1 night stand that leads to so much more! The audio version was average, but I really enjoyed the story.

Anne James does a great performance with this story. For the most part I loved the storyline. I would have liked to have seen Princess Naya less self doubting and a more confident character. The scenes where she is breaking the rules and standing up for herself, I feel represent more of her true self. Absolutely love Kenzie and Vaughn and his family. Definitely one the hottest books I have listened to recently. I will be following up in the next books in this series.

Princess Naya is destined to be the next Vampire Queen and her parents the King and Queen are in the midst of arranging a marriage for her. When she needs a break from her life she chooses to spend time with her human friend Kenzie. They end up going to a nightclub and that is where she meets Vaughn.

From the moment Vaughn sees Naya he knows that he must have her. What was supposed to be a one night stand soon became much more. The both have secrets that when revealed will change life as they know it.

I enjoyed both Vaughn and Naya as well as the secondary characters. Although they shouldn’t be together the bond between them is too strong to be denied. I enjoyed the narrator as she did a great job of bringing the story to life. I voluntarily reviewed a Complimentary Copy of the audiobook.

This is the first book by R. L. Kenderson that I have read and it will not be the last.. I couldn’t help but fall in love with Naya and Vaughn from the very beginning.. This series is definitely worth the time to read.

Vampire story with a twist

Really liked this take on a vampire royal. The story is strong and I can see the author taking this further. The secondary characters kind of got in the way for me, but they were integral. The main characters were engaging and well done.