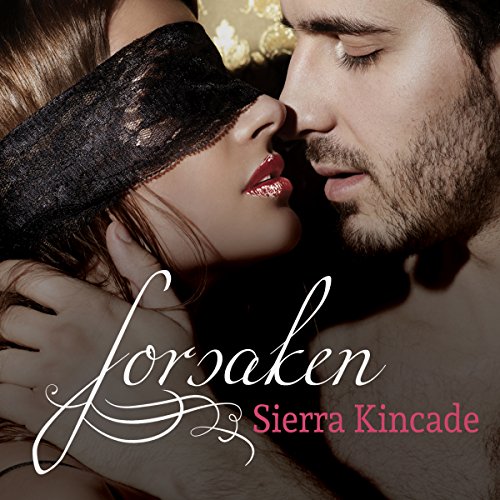 Written by: Sierra Kincade
Narrated by: Isabelle Gordon
Try for $0.00

Marsella Talent has been on the run for two years, ever since her father thrust a ledger into her hands and told her to run from the police swarming their family restaurant. Now, with the cops and her father's men desperate to get their hands on the book, she knows she can never go home.

Jake never thought he'd see Marsella again, not after he helped her escape the night of the sting operation targeting her father, August Talent. So when he stumbles upon a mysterious woman named Cassie, the spitting image of Marsella, he knows he has to gain her trust to finally make up for the mistake he made years ago.

Only the closer he gets to her, the more irresistible he finds her. And soon he realizes he'll have to make a choice: prove his loyalty by getting back the ledger or save the woman he's growing to love.

What listeners say about Forsaken

Audible Escape
This is a new author for me via A.E. As I love narrator Isabelle Gordon for romance and erotic. Her male voices are soooo good and dreamy. Check out her other reads and if you love romances, she delivers.
The author’s summery is spot on so no need to add to it. It is fast paced and will keep your interest. It is hot.
In this story our hero, Jake, takes a significant lead which I love from a romance when I can get it. Author left room for more books to be added. No cliffhanger, but room.
! I do use the 1.25x speed to match the adventure, give it a try.
This author’s mystery vocabulary is good and she paints a clear sophisticated dialogue for most scenes. My only demerit is a few times, author repeated thoughts via the heroine that I felt were repetitive and a good editor would have mentioned it. I do not know the other narrators for Ms Kincades reads so I will check out the sample. I own many stories by Ms Gordon and a ton by Ms Zackman.
Were my comments of help?

it could be whiney at times but I loved the chemistry and story. Definitely worth it.