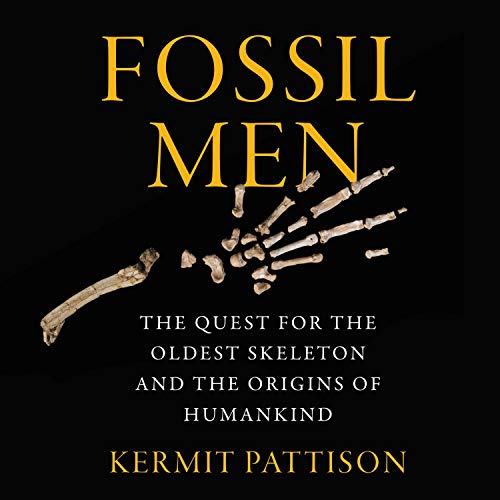 "A rip-roaring tale, Fossil Men is one of those rare books that can be a prism through which to view the world, exposing the fabric of the Earth and illuminating the Tree of Life." (New York Times best-selling author Peter Nichols)

A behind-the-scenes account of the discovery of the oldest skeleton of a human ancestor, named “Ardi” - a human ancestor far older than Lucy - a find that shook the world of paleoanthropology and radically altered our understanding of human evolution.

In 1994, a team led by fossil-hunting legend Tim White - ”the Steve Jobs of paleoanthropology” - uncovered the bones of a human ancestor in Ethiopia’s Afar region. Radiometric dating of nearby rocks indicated the skeleton, classified as Ardipithecus ramidus, was 4.4 million years old, more than a million years older than “Lucy”, then the oldest known human ancestor. The findings challenged many assumptions about human evolution - how we started walking upright, how we evolved our nimble hands, and, most significantly, whether we were descended from an ancestor that resembled today’s chimpanzee - and repudiated a half-century of paleoanthropological orthodoxy.

Fossil Men is the first full-length exploration of Ardi, the fossil men who found her, and her impact on what we know about the origins of the human species. It is a scientific detective story played out in anatomy and the natural history of the human body. Kermit Pattison brings into focus a cast of eccentric, obsessive scientists, including one of the world’s greatest fossil hunters, Tim White - an exacting and unforgiving fossil hunter whose virtuoso skills in the field were matched only by his propensity for making enemies; Gen Suwa, a Japanese savant who sometimes didn’t bother going home at night to devote more hours to science; Owen Lovejoy, a onetime creationist-turned-paleoanthropologist; Berhane Asfaw, who survived imprisonment and torture to become Ethiopia’s most senior paleoanthropologist and who fought for African scientists to gain equal footing in the study of human origins; and the Leakeys, for decades the most famous family in paloanthropology.

An intriguing tale of scientific discovery, obsession, and rivalry that moves from the sun-baked desert of Africa and a nation caught in a brutal civil war, to modern high-tech labs and academic lecture halls, Fossil Men is popular science at its best, and a must-listen for fans of Jared Diamond, Richard Dawkins, and Edward O. Wilson.

What listeners say about Fossil Men

I would wager that Tim White or Owen Lovejoy could not listen to the end of the audio version with a single hair on their heads intact. The slaughter of pronunciation of anatomical and scientific terms was exhausting. Not the narrator (actor) fault. The audiobook publisher should review scientific term pronunciation beforehand with the narrator. Excellent story.

I have always been fascinated by physical anthropology so this book was an easy selection. The author shared his meticulous research in an engaging style that opened my eyes to the incredible dedication of field scientists in this field. I mistakenly believed that scientists freely shared their discoveries, in a selfless desire to help others in a common pursuit. Not so in anthropology. Glad I chose a different field of science. Great science book for those that are interested in important historical discoveries and current views on the evolution of our species.

A number of things surprised me about this book. How crazy competition is, and how petty and valley girl certain authoritys can be at times. I found it fascinating. After watching the interview on JRE, I had to get the book and it wasn't disappointing. Kinda dry at times, but worth finishing. definitely should be on your wish list

Lots of good science about an interesting topic. But the author includes irrelevant side stories and too much information. Would have been a better story with some heavy editing.

Everybody worked against eveerybody...Ethiopian government is usually horrible, scientist like to sit on the fossils 5/years or more . All around cuththroat business, instead of science which would enlighten humankind...I knew most of the Leakeys were bad...but this much selfishness is mind boggling.....The book is well written and everybody should read it.

I am a scientist (not anthropologist) and compliment both the author and the narrator for deep digging (pun intended) into the both science and the scientists. This is a marvelous treatise - at least for nerds like me.

A reminder of why I don’t work in academia

A very good summary of the search for the fossils of ancient human ancestors during the last 40 years. I would have preferred less time spent on the rivalry between scientists. Instead I was hoping for a deeper dive into the science. The descriptions of the science was sometimes cursory while the political rivalry between labs was described exhaustively.

FABULOUS INSIGHT INTO THE HIDDEN WARS AMONG PALEONTOLOGISTS

Lous Leakey and the famous Leakey family; you know about them right? Do you know about Tim White? Remember the Time-Life books on anthropology with it’s famous image of the various hominids, (or hominin if you prefer) in purported chronological order of evolution? For those of us that do, or those of that were ever interested or curious in Anthropology (no Paleontology) this is the fascinating update now 4.5 million years into our past, with all the infighting, speculation, honesty and dishonesty of the discipline.

Riveting. I went to school or studied with many of these men before switching to a lab science 40 years ago. The field was quite male dominated. While not the Double Helix, there is good science here and the competitiveness of research rings true. If you liked Watson's book you will like this.

If you get the audio version download the pdf. And if you do not have an anatomy background, get an anatomy for dummies type book.

The narrator has a good voice, but does not know how to pronounce scientific and Latin derived words. Sometimes his attempt to mimic voices of the principals is awful and misleading.

I read this after reading Lucy and it is no match to the former. The book is verbose and badly written. Short sentences that don't relale or connect or build an interesting story. The author Wastes a lot of time on trivia and political history of the ountry. It is supposed to be a book on paleoanthropology , remeber.
wirse of all is the military style narration of the narrators. Awful.