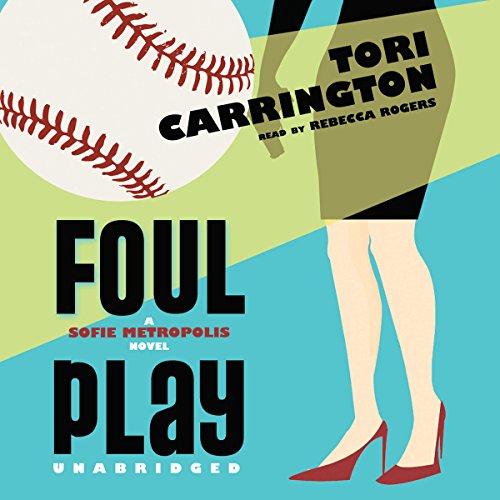 Written by: Tori Carrington
Narrated by: Rebecca Rogers
Try for $0.00

After shooting one of her own clients and accidentally getting involved with the mob, Sofie Metropolis is finally starting to get the hang of the PI business. She's just landed her first high-profile case. A local Astoria girl has made good by marrying an up-and-coming South American pitcher who has just been signed by the New York Mets. Reni Venezuela's good looks and charm, not to mention his fastball and his slider, are bringing hordes of fans to Shea Stadium. But despite his stellar record, Reni's wife insists something's wrong with her husband. Can Sofie find out what?

Meanwhile, romance and all its complications are heating up for Sofie. But while the Mets steamroll toward the pennant race, Sofie must tail Reni and hope that whatever she discovers (steroids or an affair?) won't cost her beloved Mets the Series.

"If you love My Big Fat Greek Wedding and Stephanie Plum, this is definitely the series for you!" (Christine Feehan)
"Smart, sassy Sofie knocks the ball out of Shea Stadium in this colorful concoction." ( Publishers Weekly)
"The flair and cultural humor this dynamic writing duo brings to their Sofie books is energizing and giggle-producing. Snappy dialogue and offbeat characters ensure a great time!" ( Romantic Times BookReviews)

What listeners say about Foul Play

fine for passing the time

Books from this series are all reasonably entertaining as long as you don't pay too much attention. My complaints first: The format is so similar to the Stephanie Plum books that it can elicit eye rolls. The narrator on this one is different from the other books. The narration is mostly very good... but, she only does three voices: Sophie, Rosie and then everyone else is Greek, even if they are Hispanic or Jewish.

That being said, all of the books are fast paced and amusing and this is the best of the lot.

No Anna Fields, but still a good story

Fans of the Sofie Metropolis audiobooks are saddened at the passing of Narrator Anna Fields and we miss her way of bringing Greek America to the rest of us. Ms Rogers does a capable job of of continuing the story, but I would find myself missing the way Anna spoke certain words or voices. Aside from the narrator issue, I enjoyed the story and hope that the author will continue with the new storyline direction introduced at the end of the book.

I'm only 4 chapters in but I wanted to comment on the performance. I enjoyed the first 2 books quite a lot, had found this kind of smart and snappy humor after a long time. But I was hesitant to buy this book due to unfavorable reviews about the narrator. Itvis really pretty good - it's pert and buoyant to match the tone of the story and characters and the narrator lends distinguishable and appropriate voices to different characters. Noone can be Anna Fields but this narrator is quite good.

I cannot seem to be able to get past a few moments of this book. The new narrator reads like she is going to a fire and cannot seem to do multiple voices. Why they changed from Anna Fields is lost on me. It was certainly a waste of my credits to buy this book. Very disappointed.