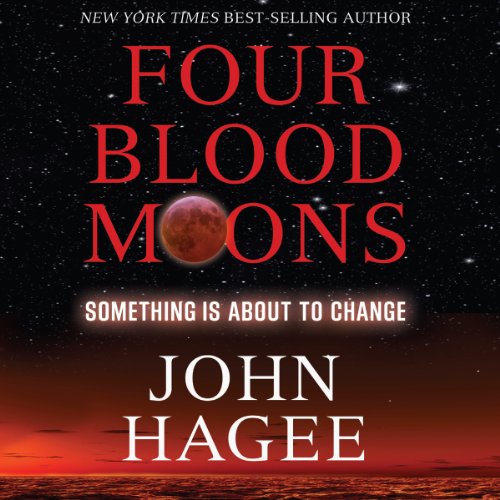 Something Is About to Change
Written by: John Hagee
Narrated by: Dean Gallagher
Length: 5 hrs and 12 mins
Categories: Religion & Spirituality, Religious Studies
5.0 out of 5 stars 5.0 (1 rating)

Over the last 500 years, blood-red moons have fallen on the first day of Passover three separate times. These occurrences were connected to some of the most significant days in Jewish history: 1492 (the final year of the Spanish Inquisition when Jews were expelled from Spain), 1948 (statehood for Israel and the War of Independence) and 1967 (the Six-Day War). Every heavenly body is controlled by the unseen hand of God, which signals coming events to humanity. There are no solar or lunar accidents.

The next series of four blood moons occurs at Passover and Sukkot in 2014 and 2015. In this riveting book, Hagee explores what these blood moons mean and why Christians must understand these signs and what they bode both for Israel and the world. Joel 2 and Acts 2 both state: "And I will show wonders in the heavens and in the earth, blood and fire and pillars of smoke. The sun shall be turned into darkness [eclipse] and the moon into blood [eclipse] before the great and terrible day of the Lord comes."

Our Sunday School classes is doing this study. It is eye-opening. As a Christian, I have been aware that Israel is God's chosen people, and that God is, indeed in control of the sun, stars, and moon that he set into motion. But this in depth study of God's timing and the four blood moons, really helped me to see that we are to be watching for the signs that the Lord sends to us. God does not "forget" his promises or his people. No one knows the time, not even the Son who sits at the right hand of God, but we are commanded to watch and wait. If you are serious about watching for the signs, and loving God's chosen people, the Jewish nation of Israel, you will gain much from this audio book. I would suggest buying the kindle book and audio book together for an additional savings.

Dose not deliver the promised title

What would have made Four Blood Moons better?

Focusing on the four blood moons. I love sermons but I did not but this book to hear one.

Disappointment. I was hoping for a detailed work on this phenomenon but what I got was a sermon with a little information on the Blood moons added. The author did a good job when focusing on this subject but I did not need the four hour back drop to his life.

I did not disagree with what the author had to say, but he did not focus on the main issue that was plastered on the front cover of his book.

Good if you aren't already familiar with Israel

The narrating was very good and the writing is also. However as someone already familiar with prophecy and Israel's essential role in it, this book was somewhat aggravating. It felt kind of preachy. Hagee is really trying to enforce a sense of urgency which I already possess and so I found this book rather grating. He backs up his stuff really super well in scripture, and I did learn some interesting tidbits of news, but for me it wasn't great. BUT for someone who doesn't have as much background in this kind of thing I think it would be really interesting and thought provoking.

Not What I thought...

What would have made Four Blood Moons better?

I thought it was going to be a little more in depth. All of this information may have been new to the author, and if you don't already know these things - then by all means listen it is good information. But I had to stop it an hour and a half in because I already know this stuff.

Would you ever listen to anything by John Hagee again?

Who would you have cast as narrator instead of Dean Gallagher?

Someone who was a little more excited to tell the story?

Not for me, but for someone who is unfamiliar with the Bible, or revelations, or the end times - this might be for you.

I wish that I had my money back.

I have listened to this book several times now. Each time I pick up another important element. I am excited to see what the blood moons of 2015 bring.

The return of our Lord Jesus Christ

one of the greatest spiritual books of all time written by Pastor John hagee cornerstone Church in San Antonio Texas this book gives us detailed information how he breaks down the four blood moons that is an open sign do spiritual connection that God has in the heavens declare the timeline of his return truly powerful encouraging to help our faith in Jesus Christ.

So much information! Absolutely amazing to hear how God has kept His protection over Israel throughout the ages. Also incredible how the United States of American’s history is intertwined with Israel.

Another preacher trying to get rich

This book is just more nonesense from the same people. If there is an armageddon to come it will be because Christ & God are sick of having their words twisted by people who are claiming to be the greatest protectors of Christianity. Beware of people who constantly seek attention on the basis that they are more devoted or connected to a particular religion; they are generally full of nonesense.

LOVED IT... It was very enlightening and hard to put down once I started it.