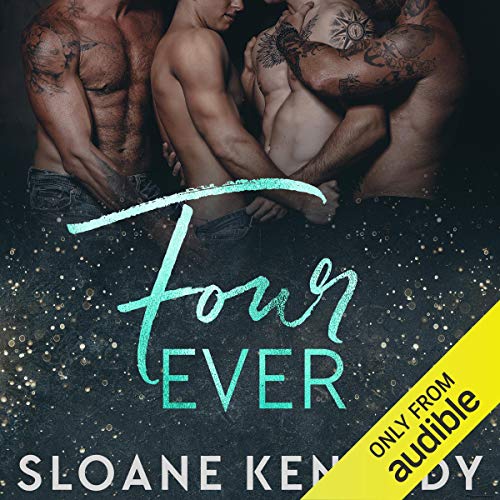 Written by: Sloane Kennedy
Narrated by: Michael Dean
Try for $0.00

Surrounded by a group of devoted four-footed and two-winged family members, Zak and Killian have built what should have been a dream life in their countryside farmhouse. But a cruel twist of fate and the re-emergence of old demons has frayed the edges of the men’s seven-year relationship until just one wrong move could end up severing their bond for good.

Seemingly content to walk on eggshells around one another, things come to a head when ER nurse Zak brings his work home with him...literally.

After being forced to leave their posh Southern California lives, homeless stepbrothers Liam and Noah are slowly losing themselves to the streets they can’t seem to escape. When 21-year-old Liam is beaten up while protecting his younger “brother”, the pair find themselves being welcomed into a home where being a stray is considered a good thing. But Liam and 19-year-old Noah have learned the hard way that nothing is given for free and there’s no such thing as the kindness of strangers. Survival means only counting on and trusting in each other.

Will Zak and Killian’s offer of a no-strings-attached place to heal end up being more than any of the four men bargained for? Especially when feelings between Liam and Noah begin to crawl to the surface and the truth of what Zak and Killian’s relationship has turned into becomes harder to deny?

And what happens when lines begin to blur and needs start to change? Will Zak, Killian, Liam, and Noah end up going their separate ways?

Or will they learn that love doesn’t always come in twos?

What listeners say about Four Ever

I really enjoyed the premise of one of these romance novels with four people falling in love together, but why does every single character by this author have to have severe levels of trauma?
Why do I have to read about abused/victims to find a proper book about a group relationship?

This story has a slow beginning as the character development is needed. But once that's done, the second half of the story is fast moving, highly engaging and super sexy!

Sloane Kennedy once again delivers an awesome piece! The conversations are so realistic. The details are just perfect. I felt like I was there... hmmm ... that would be a Fivesome! ;)

This book has a roller-coaster of emotions but the rides are worth it. How the four men come together is very heart warming.

This book is definitely a good listen. Highly recommended. Enjoy!

Loved it even more!

I absolutely loved this book the first time I read it. Listening to it has made me love it more. The emotions are more palpable and realistic. I highly recommend it

Sloane Kennedy always gives a deep book the kind of tugs at your heartstrings a little bit and we get that here. As always Michael does a great job with an natation, and never did I once get confused about who's who.
there was a bit of the issue with the timeline at one point Noah says they were only with us for a couple weeks but it had actually been longer than a couple weeks.
overall I definitely recommend the story.
there's a couple cringey moments with some of the backstory, but if you read the trigger warnings and you're okay with it, you should be fine.

Tons of self loathing

These four characters had a lot in common, self loathing. On and on and on.... There was no suspense or adventure or cleverness or romance or sex, nothing. Just self loathing. I read ten chapters and I just couldn't take any more whining. There were 6 hours left and I knew I had been patient enough. Please no more. I've heard several books with Michael Dean. He's one of my least favorite narrators and the combination of the story and the narrator was too much to handle. Not recommended.

Another fantastic audio book written by Sloan Kennedy with perfect narration by Michael Pauley. I loved the development of the relationship between these men. The respect for one another and how they grew thanks for the support of one another. The sex was absolutely off the charts; hot yet tender and loving. A great audiobook.

Omg this is not a book that would have been a normal read for me but I’m so glad that I took the time to read it!!!!! I LOVED it! The love between Killian and Zak oh my it just melts my heart. The love between Liam and Noah is precious! U put those for together and holy Hanna it was hot! I loved everything about this book! It felt real to me the characters felt real I loved it!!!!!!!

I've been wanting to read something by Sloane Kennedy, but none of her books are Kindle Unlimited, Audible Escape, Hoopla, or Libby. Finally a friend sent me an audio copy of this book. Overall, it was probably a 3.

The writing was good, but I felt like it could have been edited down not to be so long. The story was interesting and unique in several ways. A couple in a 7 year relationship (but not married) have relationship issues where they have stopped really talking to each other and are just going through the motions. They take in 2 younger guys, "brothers" (step) that haven't yet realized they care for each other romantically. Toss in a few stray exotic animals as housepets, and the couples all become a 4-some with an HEA.

The narrator (Michael Dean) is popular, but I felt like he didn't "perform" this one, just read it. 4 guys changing POVs in one story with little to no voice changes was a little tricky to follow.

So, I enjoyed it, but I didn't think it was great.

Couldnt even get thru it.

painful from the start. uninteresting plot line that was hard to follow. overly emotional and unrealistic. save your money.

Hot mess express. All of it. This was so bad.

The entire book you're just following along 2 broken young brothers who ran away from home and a adult MM couple who's relationship has fallen apart. There is history given on both and why the brothers ran away from home and why the MM couple is struggling within their relationship. Neither reason is really fleshed out instead the book chooses to focus on the after effects of the prior struggles and how damaged they are. The focus on damage is exhausting as not a lot is done to alleviate any of their damage other then the most generic passive words of comfort and affection.

This does not make for an entertaining read when so much attention is spent to the feeling and effect of trauma but not a lot of time spent actually tackling the trauma or the event itself. It's incredibly unbalanced and draining to constantly read about the struggle but the writing just not being good enough to give you a reason to care.

Also the whole story pretty much wrapping up the most generic message is so infuriating. The morale of the book gets dumbed down to essentially the adult MM couple could have avoided all these relationship issues if only they just communicated, and for the brothers, sex/love heals everything (completly in appropriate given their situation). Those two generic tropey solutions just did not sell well with the poor quality of this writing. Also this would require an insane amount of suspension in disbelief too. When you find out that the young brothers trauma is from a dangerous sexual encounter, I think explaining it away by making it seem like sex with his step brother and this couple is how to start healing is grossly irresponsible.

It takes nearly the entire book for any meaningful progress to happen too and when progress does happen its really not prompted by much of anything other then time. This is purely a relationship focused book and the building of a new relationship between the brothers and this already existing MM couple. The relationship gets going purely based on physical attraction. These guys know really nothing about eachother and even the reader barely knows anything about any of them other then their traumas and relationship problems and this is served as the spark to get them to all be in love? I could not roll my eyes hard enough.

The ENTIRE book takes place within a house and mostly a bedroom. When the scope of a book is kept so small it over stays its welcome with its simplicity. Any variety to the location this book could have added something/anything. This was so boring, why was the entire books setting set in a house?

The pacing was so bad, i was getting so frustrated with how long it took anything to happen. There is just so much focus on feelings and how damaged they are but not enough context.

This book was bad. I guess the only thing I did like was the spicy moments were serviceable but did feel unrealistic and empty. Also I was able to finish somehow instead of a hard DNF, so that should say something about it at least being good enough to finish. Wouldn't recommend this even to those who are desperate.