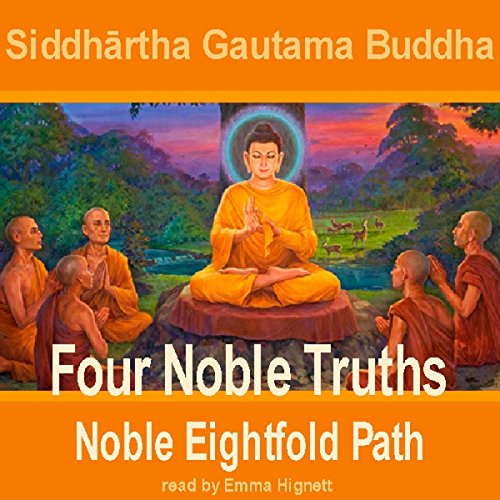 The Four Noble Truths and Noble Eightfold Path, classically taught by the Buddha in the Dharmacakra Pravartana Sutra, read by Emma Hignett.

Selected excerpts from the Pali with commentary

This audiobook is the Audible Audio Edition of the book:

Nyanatiloka Mahathera. The Word of the Buddha: An outline of the ethico-philosophical system of the Buddha in the words of the Pali Canon.

This little work is a compact sourcebook in English on the Buddha's basic teachings compiled and explained by Nyanatiloka Mahathera (a German scholar-monk).

The main difficulty in listening to this as an audiobook is that it is very difficult to tell when the excerpts from the Pali Canon end and the commentary from Nyanatiloka begins and vice versa.


From the Preface to the Eleventh Edition:

“The Word of the Buddha, published originally in German, was the first strictly systematic exposition of all the main tenets of the Buddha's Teachings presented in the Master's own words as found in the Sutta-Pitaka of the Buddhist Pali Canon.

“While it may well serve as a first introduction for the beginner, its chief aim is to give the reader who is already more or less acquainted with the fundamental ideas of Buddhism, a clear, concise and authentic summary of its various doctrines, within the framework of the all-embracing 'Four Noble Truths,' i.e. the Truths of Suffering (inherent in all existence), of its Origin, of its Extinction, and of the Way leading to its extinction. From the book itself it will be seen how the teachings of the Buddha all ultimately converge upon the one final goal: Deliverance from Suffering.”


From the Chapter "The Noble Truth of Suffering":

“[A. III. 35] Did you never see in the world a man, or a woman, eighty, ninety, or a hundred years old, frail, crooked as a gable-roof, bent down, resting on crutches, with tottering steps, infirm, youth long since fled, with broken teeth, grey and scanty hair or none, wrinkled, with blotched limbs? And did the thought never come to you that you also are subject to decay, that you also cannot escape it?

“Did you never see in the world a man, or a woman who, being sick, afflicted, and grievously ill, wallowing in his own filth, was lifted up by some and put to bed by others? And did the thought never come to you that you also are subject to disease, that you also cannot escape it?

“Did you never see in the world the corpse of a man, or a woman, one or two or three days after death, swollen up, blue-black in color, and full of corruption? And did the thought never come to you that you also are subject to death, that you also cannot escape it?”

If you're interested in exploring the teachings of Buddhism, you should go directly to the original sources. They are rich, vivid, clear, and vigorous. I would like to suggest two very good English-language anthologies of suttas:

Rupert Gethin. Sayings of the Buddha: New Translations from the Pali Nikayas. Oxford, 2008.

Listen for yourself, remember, these are sacred texts that follow the sayings of the Buddha .

I honestly can’t believe I’m sayin this but the individual reading the book is speaking too fast. Normally I have to speed up books to stay involved. This one I’ve turned down to .8 and she is still just too speedy.

Not sure if this narrator truly wanted to read this out loud . Just no. Try the heart of the Buddha by Thich Naht Hanh

The reader sounded robotic at times and as if she was reading bullet points. Lots of information that didn't blend very well and was not engaging.

The four noble truths contain the path and practices to Nirvana! A book to listen to again and again.