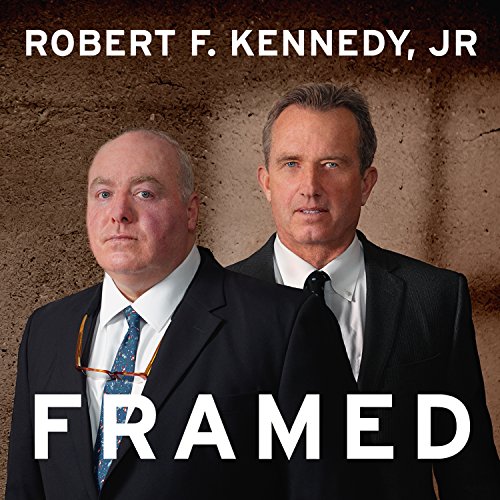 In 1975, 15-year-old Martha Moxley's body was found in the backyard of her family's Connecticut home, and a member of America's beloved Kennedy family, then also 15, was accused of the crime. What ensued was a media firestorm and a whodunit that transfixed the nation, providing daily debates - and cruel, dinner table entertainment. Now, 40 years after Michael Skakel's conviction, his cousin, acclaimed activist and writer Robert F. Kennedy, Jr., has taken matters into his own hands to get the charges dropped and clear his cousin's name.

This startling exposé - a riveting true story of murder, romance, and fame - is the story of Skakel's conviction that the public has never before been privy to. It is the product of hundreds of interviews with Skakel and those who knew him, Martha Moxley, and what may have happened the night of the crime, Halloween eve. It also explores why Kennedy believes Skakel has yet to receive a fair trial, and why he demands the original verdict be overturned.

What listeners say about Framed

Who would you have cast as narrator instead of Peter Berkrot?

Michael Skakel is innocent and Bobby's father must be proud of him for standing up for Michael in this way. If the Connecticut Supreme Court allows a new trial, we will finally get justice and Michael will be judged not guilty.

I had a few problems with this audiobook.

I found the reading to be WAY too dramatic in tone and afflictions. Distracting so.

I nearly couldn't get past chapter one because I took so much offense to the immediate deployment of smear of nearly every person who the author wished to discredit. Maybe it's the lawyer part of me, but I can't get past the relatively thin attack on facts. Substituting strong worded personal attacks in place of evidence was a held theme throughout.

I was eager to hear the promised content of this book, and was wholly let down.

I would not recommend. It looks like Skakel is innocent but no tangible proof still. I have a hard time understanding why Sherman was his lawyer. With this said, Kennedy is no friend of Michaels. He dos this to deflect from his train wreck of a family. What a bunch of losers (disguised as truly caring for public services)
I do so admire Eunice Shriver. I'm sure that family would love to ex-communicate from the Kennedy clan

Would you listen to Framed again? Why?
No. It's 13.5 hours of Robert F. Kennedy droning on about why he think his cousin didn't murder Martha Moxley. Michael Skakel murdered her, and that's all there is to it.

Thank you Robert Kennedy Jr. for taking the time to research and inform the public of the total injustice that is out there is our world of the land of the free......why did it seem so easy for you to find the all the clues when the people who were paid dearly could not. I feel so bad for Michael and it's just so unfair for both families to have suffered such unbearable pain and heartache. I am anxiously awaiting the verdict and I sure hope and pray they look into all your findings. Thank you for loving the law and trying to make it uphold in the court system. There has to be descent people out there who know in their hearts what they have done is wrong in sentencing an innocent man for a crime he did not commit and let the real criminals go free.

The most disturbing thing about the Moxley case is how many good suspects there were. By the time you are done with the chapters where Kennedy Jr. painstakingly catalogs each suspect and their bizarre behaviors, you get this picture of a lovely, spirited teenaged Martha on Mischief Night surrounded by monsters, any one of which could have committed this crime.

I have read all of the books on the Moxley case and before reading this one. I would have to say Len Leavitt's book Conviction was the one that convinced me of Michael 's guilt. However, having read Framed I have serious doubts, enough to give him the "reasonable doubt" pass. I see Michael as much of a tortured soul as Ken Littleton and the descriptions of the tortures at Elan School certainly relegate any so called confessions while there suspect. At the very least, Framed makes the case for ineffective counsel and a new trial.

I don't quite buy the author's claims to have found the real killers. The two, based on the information of a questionable source, with no real corroraboration, do little more than raise the possibility of another suspect, hence, more reasonable doubt.

Framed is well written and keeps the reader engaged throughout.

In the end, the question of who killed Martha remains a mystery. Personally, I think it had to be Tommy or Michael, based on their bizarre stories years later that put them close to or at the murder scene.

An incredible analysis of a very complex case ! A must read no matter what your opinion is on the guilt or innocence of Michael Skakel.

This is fascinating and appears very factual and believable. My problem with the book was the narrator. His voice is annoying to me and I didn't like how he read the story. It just seemed to dramatic and put on. But other than that I very much enjoyed listening to what RFK JR had to say.

We as he framed?

This book just put more questions in my mind. I'm still not sure what happened