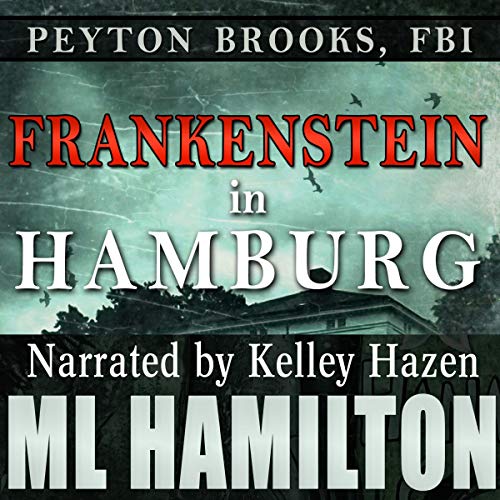 Peyton has proven herself worthy of the elite Ghost Squad, solving seven cases for the FBI in her first few months. Her personal life with Marco has also stabilized and they are both looking forward to building a future together.

However, Marco finds himself increasingly entangled in a mob situation in San Francisco, while Peyton is called to Germany, where American tourists are going missing.

As the Ghost Squad boards a plane for Europe, they fear that they are about to come face to face with a modern day Dr. Frankenstein, a scientist conducting horrific experiments.

Peyton’s commitment to her team is indisputable, but she has a secret she longs to share - and the one man she wants to share it with happens to be half a world away.

What listeners say about Frankenstein in Hamburg

I just love this serious! Great ending to this book.
Hope it never ends. keep them coming.

GREAT read made even better by flawless narration

Frankenstein in Hamburg is full of just the right amount of tension and excitement. i was dissappointed that the author chose to slide into the annoying soap opera technique of ending the book on a cliff hanger. I'm hoping that won't happen in future ML Hamilton novels. It's still a really good book. I've listened to all of the Peyton Brooks Mystery series and the Peyton Brooks, FBI series and want them to keep coming. Kelly Hazen's narration is phenomenal. Between the author's story development and Kelly's flawless presentation of the characters, the reader can actually visualize them and their interactions. Every novel is a great stand alone story. You can jump in anywhere in the series for a great 'read', I suggest reading from the first book because the characters continue to grow and develop through both series adding depth and richness to each well plotted story line. I'm enjoying familiarity with the characters in these novels and love the anticipation of catching up with them in each new publication.

Wow! I loved this one. Peyton and her squad find new challenges within their team, and things in San Francisco are getting more and more complicated. We learn more about the entire gang, and all that just adds up to the experience of following all these characters.
I won’t spoil anything, but I got chills at the end of this one. Kelley Hazen and M.L Hamilton are quite the dream team. More, please!!!

Can’t wait for the next book

I’ve read all the Peyton Brooks books and this contained the most heartbreaking crimes and the most potentially terrifying ending. I am in love with Peyton and Marco and their crazy but loving patchwork of friends and family. They perfectly balance one another in both their professions and their personal life. I highly recommend this book, but start at the beginning of the series. You’ll love this book even more.
NOTE TO M. L. HAMILTON: Please write fast. I need to know what’s going to happen next. :)

The Ghost Squad picks up another case, and this one takes them to Germany. While Peyton and the team are working the case in Hamburg, the SFPD has their hands full with their own problems. There’s so much going on, on both sides of the world, that I couldn’t put this down. I need the next book!!!

M.L. Hamilton, how could you leave us hanging? These characters have come to be like family, and I’ll be anxiously awaiting the next book!

No matter what situation is thrown her way, Kelley Hazen delivers. She really does take things to the next level with her narrations. Fantastic!

I love how you feel as if you know the character. When she takes you traveling and solving all these bizarre murders. What a fun rollercoaster ride

Peyton is fabulous In her role. Once you start listening, you think you’re part of the action. There is nothing that stops you from enjoying the who book.

I really felt sorry for the doctor in the end because of her husband. I wish she didn’t kill herself.she really love her husband. Love sal who join the ghost squad. Glad that they all com out this okay. Had me on the edge of my seat and I couldn’t stop reading until i finish the book. I also love the reporter harpermccloud, sher is funny, cute, and i love her with donta, they make a cute couple. They have been through allot and i hope everyone is still stay the same for awhile. Recommend reading and give five stars.

Where is the next one???

I loved all of the characters: Peyton, Marco, Jake, Maria, Abe, Stan, Marco’s family, they were all in her first series Peyton Brooks’ Murder Mysteries and now in FBI; Radar, Tank, and Bambi. I like how Peyton relates to people; it is full of suspense and action. In this book the Ghost Squad goes to Germany to track down a crazed transplant doctor and Marco has to deal with a mob, only complaint was the cliffhanger ending and it was WOW so next one needs to come out asap! Recommend to anyone who likes murder mysteries with fun characters and good narration. Look forward to her next books as characters become like family. I was given this free review copy audiobook from Storytellers production at my request and have voluntarily left this review. THANK YOU!

I was voluntarily provided this free review copy audiobook by the narrator and found it very enjoyable. As with all the other books, this book is suspenseful and action pack showing both the bad and good sides of society. The honeymoon is over and Peyton and Marco are back to work. Marco is still trying to keep the streets of San Francisco safe and Peyton is off to Germany looking for a crazed doctor. The suspense filled plots will keep you listen, but the realistic characters will make you love it. This combination of author and narrator is awesome. I can hardly wait to start the next book especially after how this book ended.

I love Peyton Brooks any way. however this was well written and engaging. can't wait to see what happens next!