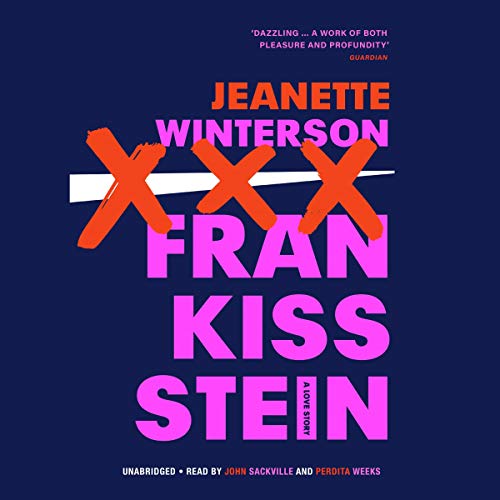 Since her astonishing debut at 25 with Oranges Are Not the Only Fruit, Jeanette Winterson has achieved worldwide critical and commercial success as “one of the most daring and inventive writers of our time” (Elle). Her new novel, Frankissstein, is an audacious love story that weaves together disparate lives into an exploration of transhumanism, artificial intelligence, and queer love.

Lake Geneva, 1816. Nineteen-year-old Mary Shelley is inspired to write a story about a scientist who creates a new life-form. In Brexit Britain, a young transgender doctor called Ry is falling in love with Victor Stein, a celebrated professor leading the public debate around AI and carrying out some experiments of his own in a vast underground network of tunnels. Meanwhile, Ron Lord, just divorced and living with his mom again, is set to make his fortune launching a new generation of sex dolls for lonely men everywhere. Across the Atlantic, in Phoenix, Arizona, a cryogenics facility houses dozens of bodies of men and women who are medically and legally dead...but waiting to return to life.

What will happen when homo sapiens is no longer the smartest being on the planet? In fiercely intelligent prose, Jeanette Winterson shows us how much closer we are to that future than we realize. Funny and furious, bold, and clear-sighted, Frankissstein is a love story about life itself.

What listeners say about Frankissstein

Perdita weeks rocks my world but The story SUCKS!

Perdita Weeks is the best narrator of all time. This book was so interesting, loved it.

There's a truly horrifying r*pe scene in this book, which is made even more disgusting by the fact that it's an audiobook, so it's not like you can scan pages to figure out when it's over. I was listening to this while driving home and it was *extremely* upsetting. I'm afraid to finish the book because I can't pick it up where I left it off, and I can't imagine the ending of the book giving me any closure whatsoever. Either the rest of the book will be about the SA or, worse, there will be no resolution to it at all. It really pisses me off that people can't tell a story about a trans man without someone r*ping him. This did not have to get all "Boys Don't Cry", but it does.

I kinda liked the historical-fiction bits of this book, but the "modern day" parts were lacking so much. The main character Ry is as unlikeable as the support character, Victor: douchebag-the-science-guy. The romance in this book is absolutely cringey. Victor is constantly telling Ry that "he's not gay" - which would be a huge slap in the face to any *actual* trans person, a complete invalidation of his identity - Ry is just like, yeah I know, it's fine. Ry is constantly falling into tropes that I hate in cis-women, and let me tell you, putting them in a trans man only makes them worse.

The parts that seem to be trying to pull apart the machine intelligence/monster/undead are okay I guess? I didn't really think anything here was new, and it didn't really resonate with me.

This book is: poetic, interesting, gross, monsterous, and like Frankenstein's monster, cobbled together from a bunch of different pieces that really don't belong together. I do NOT recommend it.

The story itself was good and thought provoking, but a bit lyrical in some places for my taste. I would also second the several reviews claiming transphobia, but would clarify that there are several characters who are transphobic while the message itself is pretty progressive (IMO, I don't speak for trans people).

The best part of this book was Ms. Weeks' performance. I could listen to her read the ingredients off a milk carton for eternity and would be totally enthralled.

Ohhhhh, where to start. First, I enjoy anything Jeanette Winterson writes. I first encountered her in The Passion, which is a fantastic book about Venice, Napoleon Bonaparte and magic. Second, I read Dracula and Frankenstein every October (my self-nominated Month of Horror) so this book provided a lovely and new read for my Month of Horror. Aside from the loving homage to Frankenstein, this book creatively blends history with the present, creator and created with descendants, and throws in an eloquent love story to boot. Ms. Winterson is a genius and I highly recommend this book for anyone interested in a fantastic(al) read. Brilliant!

It is obvious that Jeanette knew and knows nothing about the trans experience or the trans community when reading this book. She has written a graphic sex scene detailing an enlarged clitoris and sensitive nipples. This is purely erotic in nature and not based on any scientific fact. And then to run into a rape scene? Almost all of the books I’ve read including a tape scene let you know about it prior to even opening the book:it’ll be in the description, the cover, the inside cover, somewhere. A trigger warning. Running into the rape scene messed me up for a few days and it is really upsetting considering that could’ve been avoided by just letting the reader know. I do not understand where Jeanette was going with this story or why she would think putting misinformation and false statements about an already underrepresented and over sexualized group would be okay. It obviously did her well, and it makes me sad to think everyone who read this book now sees trans individuals in the light Jeanette does. It’s terrible. And just another random note: I hated the story line. I loved when the story centered around Frankenstein in the “flashback” type of chapters. But to try and connect Frankenstein to a transgender individual and sex robots ? Why all the oversexualization!!!!!!

I could not finish it because I was so offput by the racist stereotypes and unnecessary sexual violence.

Disappointed in Winterson and her editors for not running this through a sensitivity reader. I can’t believe I didn’t bail.

Ry is a terribly flat character, who only ever talks and thinks about being trans. It's not realistic, and neither is the cruelty that they face. It's fear mongering and poorly written. If the author had written about Mary Shelley alone, that would have been a much better book.

great performance, I just expected the story to be different. it was entertaining at times, this book is just not my cup of tea. it's very philosophical and analytical but not a story like I expected. others may enjoy this book though.

A fascinating, well researched, well written novel that raises all the questions of the original.