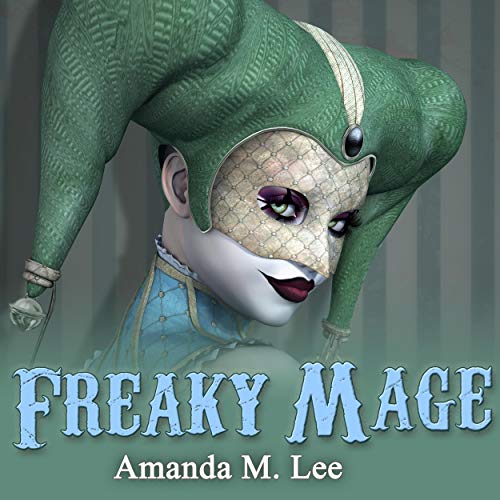 The members of Mystic Caravan have Georgia on their minds as they land in Savannah…and immediately find trouble.

In a city full of ghosts, Poet Parker expects a few magical things to happen, but when an evil cult sacrifices a young woman on the beach next to their camp, things take a turn nobody was expecting. Thankfully, she’s not alone for this fight.

Zoe Lake-Winters is considered the most powerful mage in existence. She’s brash, full of herself, and ready for a brawl. When she and her husband bring their daughter to the circus, Poet is immediately intrigued. She can feel the power rippling off Zoe, and it’s the sort of power that can force a reckoning.

The cult has magic, but it’s not enough to frighten Poet. It’s what they’re protecting that has everybody in a tizzy. It seems there’s a door to another plane, and the enemy trying to cross over to a world they were driven from is significant.

With Zoe and her mouthy daughter Sami on the prowl, Mystic Caravan is in a tumultuous state. On top of her normal worries, Poet also has to contend with her boyfriend Kade Denton, who is delighted to have another mage to learn from even as he struggles to trust his new abilities.

Magic is might, and there’s magic bubbling at every corner of Mystic Caravan. That’s a good thing because for the final fight they’re going to need every ounce of it they can muster.

Worlds are about to collide, and nobody will ever be the same again.

What listeners say about Freaky Mage

I HATE THE WINTERS FAMILY!

The Mystic Caravan is by far my most favorite series in the Amanda M. Lee universe. However, I almost returned this book when I saw who was going to be appearing in it.

I'm so tired of the Winters family being crossed over with all the other series. They almost ruined this book, too -- just like they have all the others they have guessed in. Zoe is god-mode over-powered and Sami is beyond obnoxious and over-powered as well. And the dad is so overshadowed by the rest of his family that I have a hard time remembering his name from scene to scene. (I know..it's Eric..)

Every time they come to town, they are so much stronger than all the regular characters that their involvement makes the plot is almost moot. I don't understand why Amanda Lee is so willing to sacrifice the main "badass" regular stars of every series they guest in. They make the biggest regular tough, who should the day-saver, look completely unnecessary to whatever story they appear in.

In this series, Poet is super strong as she should be as the main character, and Cade is growing in power so that it is slowly becoming obvious he will be an even match for her some day soon. There are several other strong, lovable characters in this series as well, but when the Winters family blows into town, all their strengths become irrelevant.

This is what happens in every cross-over they do. The plot is exactly the same -- just in another town. Zoe struts onto the scene, where her legend always precedes her. She and her husband oscillate from flirting and fighting causing Sami to get grossed-out and become even more annoying. Sami, for whatever reason, whines her way into a desperate situation and Zoe has to go rapaging in to save her, only to have the girl show some hitherto unknown talent which she uses to save herself. Whatever series regulars happen to be around try to help resolve the situation, but their efforts are mostly unneeded.

I'm also tired of having the Covenant backstory hinted at to the other characters, but always in the same way, and never giving enough detail to really explain anything.

Amanda, I know you read the reviews here on Audible so I'm begging you, PLEASE stop doing cross-overs with this family. They don't really add anything to the series they visit and tend to make the regulars look weak. Plus, their plots are all too much the same every time.

I know there are people who won't agree with me, but to me, it's like watching a rerun that I didn't really enjoy the other times I saw it.

Im sorry if I spelled the names wrong. I only listen to the stories so I don't know how they should be spelled. Also, I'm sorry this review is so long...but clearly I had a few axes to grind.

I LOVE THE WINTERS FAMILY!!!

after reading Dee M's ridiculous review, i feel the need to respond and address the 'axes she had to grind'. mostly? what a bunch of crap
...zoe does usually strut onto the scene, but only bc she Can. she does Not take away from the other leads in their own stories. she always Helps the main characters figure out something they were missing, and how to go about getting a grip on their new realities
...case in point: when the winters' blow into Hawthorne Hollow, Scout is finding out more and more about her incredible abilities. zoe gives her a push in the right direction and stands back to let Scout shine
...that's what she does in Every crossover. she helps the main character see what's right in front of them, but was hard to grasp
...zoe also doesn't outshine Aric. they are soulmates and act as such. Aric definitely has his moments, even in the crossovers
...as to the Covenant College references, read or listen to that {frickin} series, then you'd understand what's always being hinted at, and why
...like i said, what a bunch of crap. don't spew crap and nonsense about things you have no knowledge of, or just in general don't like. it ruins things for everyone else
...done now
💗💗💗amanda m lee And the Winters'!!!

SPOILERS: I've read every book in this series and "Freaky Mage" is a worthy addition to the group. I got turned on to Amanda M. Lee by her "Witches of the Midwest" series, but somewhere along the way she decided to change narrators for that series and I find the new narrator intolerable. That's when I decided to try Mystic Caravan. I like it at least 80% as much as WOTMW and that's pretty good.

I usually find the main couple in MC to be a bit cloying, but they made progress in Freaky Mage. They finally seem like they have at least a little bit of trust for each other (instead of constantly needing reassurance). This is a marked improvement! Other pluses for this story include a trip to a magic shop (I was really hoping they'd return!) and a crossover of characters from one of her other series.

As for suggestions... One thing I would change (if I could) would be the overuse of the phrase "A smile that didn't quite make it to his/her eyes." It is so overused in Lee's books, that when I hear the phrase, it instantly takes me out of the story. It's a crutch. Time to let it go. I might also suggest that the final battles in Lee's books (I read Mystic Caravan and Spell's Angels) are getting pretty short and one-sided. The heroes seem to be winning a bit too quickly and easily lately.

when worlds come together

Truly all my favorite people in one place, and even the Grimlocks were mentioned. just a fantastic book I love it

my absolute fave Mystic book yet!!!

an amazing read. sonmuch potential for an epic crossover!!! the grimlocks , the winchesters, toss in the Winters and and our beloved Circus.. cannot wait to see where the future books lead

I didn't want to stop listening / reading the book. I loved being able to see Aric, Zoe and Sammy again. loved reading about kade growing in his powers. exited to see whats next for them.

one of my favorites yet!

i loved this story and the chemistry between everyone, I laughed so hard, so much! it was super fun!

Another great hit. I loved the story,the humor, and crossover. The way they all blended together. AML please keep writing. I can’t wait for then next book in any of your series and LHH series.

loved it as usual

I loved the book... first time getting it in audio book form and not a fan of the reader (sorry)
poet and zoe together are a force to be reckoned with!