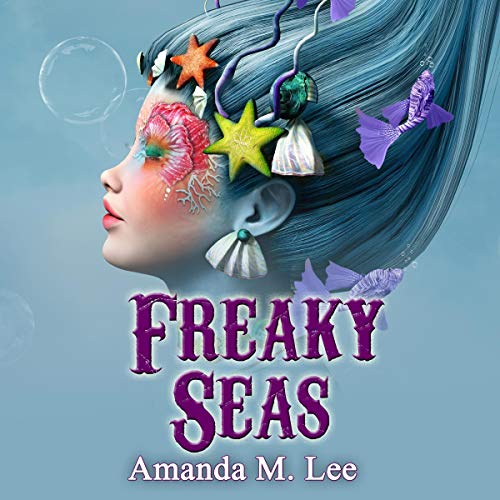 Mystic Caravan Circus is heading to Charleston and - per usual - trouble is not far behind.

For Poet Parker, who is grappling with saying good-bye to her assistant, she’s looking forward to quiet nights on the beach and quality time with her boyfriend. All that changes when the sea starts giving up its dead...and they appear to be hungry.

Under normal circumstances, zombies wouldn’t be a big deal. They’re slow, lumbering, and easy to dispatch. This infestation is different...and they appear to be controlled by a strange creature long since thought extinct.

Gorgons were believed to be things of myth and legend, but one is haunting the beaches of Charleston...in close proximity to the circus and a writer’s retreat. In fact, the nutty individuals spouting fantastical stories and trying to one-up one another in the bluff house overlooking the circus grounds are all suspects because one of them is controlling the gorgon. Finding the individual responsible for causing endless upheaval and death is no easy task, though.

Poet is a fighter, but this battle is all-encompassing.

Not every monster is obvious. Sometimes they hide behind human faces.

This time, Poet is going to have to wade through layers of darkness to find the light. Surviving to see the final sunrise will take them all working together...and even then they might not be strong enough to claim victory.

Darkness is coming. Will anyone survive to see the dawn?

What listeners say about Freaky Seas

I am so happy with this series so far! I cannot wait to listen to more.

characters can be a little immature but it keeps it from getting to dark. I find it very entertaining!

Stick with a story not an agenda!

Clearly, I am a fan of this series as I’ve read to this edition. However, the liberal woke agenda and defamation of men really irked me. When the authors woke agenda compromises the story, she will achieve a limited audience.

Poet is one of the best characters! So smart and caring. Love the connection that the whole group has with each other. Can’t wait to read / listen to more of this series!

Fun series with great characters and heartfelt moments. The battles are fun and the magic interesting.

I loved this book. it had me laughing and Lily Harper Heart omg her shirts had me looking them up to get them. I can't wait for more in the series. It's definitely worth the read. One of my favorite series.

this book and the series it's good but I think it would have been a lot better and one character was eliminated, and a certain issue I will not bring up puts a damper on things, just saying but it was a good book. the narrator did a great job.

Mystic Caravan has become a family to me

i really hope this isn't the last book of the series!?!! I'll be keeping my fingers x'd that there's more to come~ there are so Many more avenues to be explored! .. right?!!=)) one thing I especially loved, was ms Hart's cameo~ that was Super fun=) I'm guessing she and ms Lee are good friends=) it was a genius move I could never have imagined~ so many props to ms Lee for giving us this incredible tale!
and as always, the same goes for
ms Kelly! her narrations are always on point, making these stories even more enjoyable=) you Go, ladies!!
💗💗💗

Totally in love with this series

If you're starting with this book you are depriving yourself. Buy them all and enjoy getting to know all the characters of thr circus. They are so deftly crafted that when this book is done and you realize there are no more (yet), it will feel like your best friends have all moved away. Do yourself a favor and read this series.