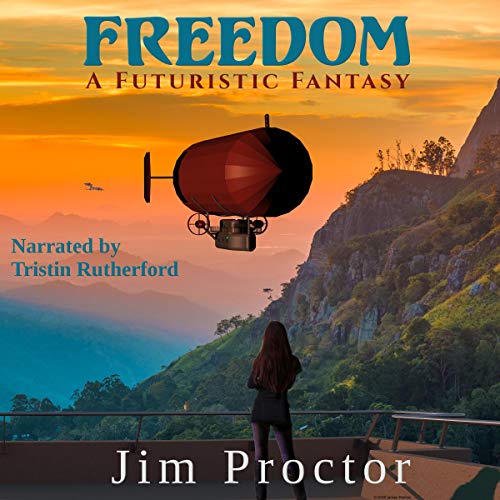 Written by: Jim Proctor
Narrated by: Tristin Rutherford
Try for $0.00

Jazeen is a prisoner...not in a jail or a dungeon but in her own home. Her parents, guilt-ridden since the death of their oldest daughter, never allow her out of the house except to attend school.

A chance encounter with Angus, an eccentric airship captain and retired wizard, is going to change all that, sending Jazeen's life in an entirely unexpected direction. Thrust into a reality where magic isn’t make-believe and evil witches really do exist, Jazeen faces a hard choice when Angus is taken prisoner by a bounty hunter who is set on delivering him to the Black Witch.

Jazeen isn’t about to sit by and let her new friend face the Black Witch alone. She knows exactly what the witch wants and is willing to risk her life to offer a trade.

That is, of course, if Jazeen can cross the Great Ocean in Angus’s airship, a week-long trip made even more dangerous with Jazeen’s limited piloting hours. There, she must track down and bargain with an evil witch who kills anyone who so much as disappoints her.

Jazeen might be strong and clever enough for this endeavor...or, a painful death might be the only reward for her efforts.

What listeners say about Freedom: A Futuristic Fantasy

I looked forward to my drive home just so I could listen to this book!

I loved this book! The imagery was excellent. The character development was great, and their individual story lines all wove together perfectly. It is such an original idea; a world where it seems like their technology is on the same level as ours, but people are flying around in airships! There is a little bit of magic ( I love a little magic!), but it doesn’t distract from the relationships between the characters as they deal with the difficulties in their lives.