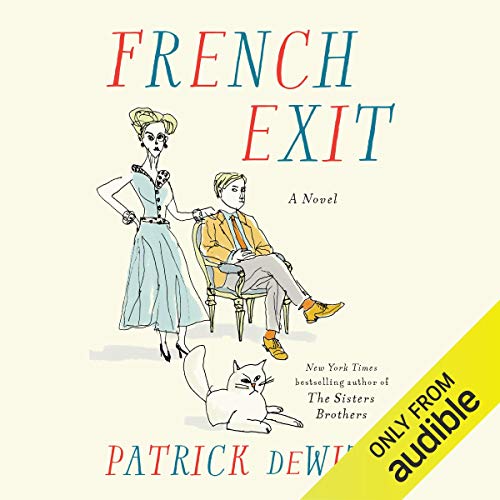 Written by: Patrick deWitt
Narrated by: Laurence Bouvard
Try for $0.00

A Recommended Book of the Season for Vanity Fair, Entertainment Weekly, Vulture, The Millions, Publishers Weekly, and Esquire.

From best-selling author Patrick deWitt, a brilliant and darkly comic novel about a wealthy widow and her adult son who flee New York for Paris in the wake of scandal and financial disintegration.

Frances Price - tart widow, possessive mother, and Upper East Side force of nature - is in dire straits, beset by scandal and impending bankruptcy. Her adult son Malcolm is no help, mired in a permanent state of arrested development. And then there’s the Price’s aging cat, Small Frank, who Frances believes houses the spirit of her late husband, an infamously immoral litigator and world-class cad whose gruesome tabloid death rendered Frances and Malcolm social outcasts.

Putting penury and pariahdom behind them, the family decides to cut their losses and head for the exit. One ocean voyage later, the curious trio land in their beloved Paris, the City of Light serving as a backdrop not for love or romance, but self destruction and economical ruin - to riotous effect. A number of singular characters serve to round out the cast: a bashful private investigator, an aimless psychic proposing a seance, and a doctor who makes house calls with his wine merchant in tow, to name a few.

Brimming with pathos, French Exit is a one-of-a-kind "tragedy of manners", a send-up of high society as well as a moving mother/son caper that only Patrick deWitt could conceive and execute.

Hear the Author Read an Excerpt

At Between the Pages: An Evening with the Scotiabank Giller Prize in Toronto on November 4, 2018, author Patrick deWitt read an excerpt from his novel French Exit.
0:00

What listeners say about French Exit

Offensively bad - cliched writing, hackneyed characters, irritating narration and tired old tropes. Not worth the time and energy of listening.

I did not read the paper copy of this book, only listened on Audible, so I am not sure if I disliked the story itself or if I disliked the narration so much I could not take in what the book had to offer. The narrators voice for each character was very irritating and given how much dialect was in the story I could not focus on anything but her nasal and over-exaggerated character voices.

Didn't enjoy this as much as previous books, but deWitt is an excellent writer IMO

easy to listen to. I listened to it twice. but the story is hackneyed and the characters are trying too hard to be nonchalant. which is ironic.

A perfect summer read that gently warms the heart while providing an amusing chuckle and unlikely cast thrown together for a perfectly odd moment in time.

Enjoyed until the End

Ending failed what was a quirky, sharp book. The quirky was fun. The characters are not meant to be likeable but they are interesting with humour at the right points. They reveal the characters layers as the books proceeds so you want to know more. Shame about the choice of ending.

The narrator makes French Exit unbearable by turning every male voice into Beaver Cleaver. Why didn’t the producer or publisher note how annoying this is? This is a droll, light tale, but the reader kills the humour with cuteness. The only thing that could be worse would be adding a laugh track. I had to download the ebook to finish this - a better experience, but even then the book is a somewhat contrived comedy of manners. Still, it deserved way better than this travesty of a reading.

could not put it down

I love this book, and have now downloaded another one by the same author with great excitement

Commedy of Manners and useless rich people aren't really my thing (yes, I know it's societal critique). Found all characters relatively blah except for the cat. Found the latter part of the book slightly more enjoyable when it becomes more absurd; the seance with Small Frank was definitely the highlight. Is very well written but I definitely preferred deWitt's other works.