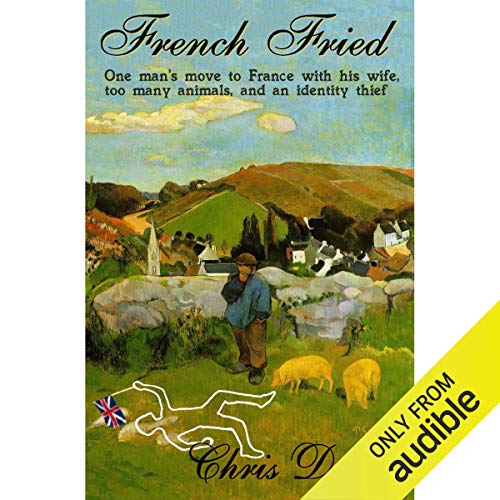 Written by: Chris Dolley
Narrated by: Darren Stephens
Try for $0.00

Animals behaving badly, other people's misfortunes and the most bizarre true crime story ever.

French Fried is the unfortunately true account of Chris Dolley's first eight months in France and has been described as 'A Year in Provence with Miss Marple and Gerald Durrell.'

Just when Chris and Shelagh think nothing more could possibly go wrong, they discover that Chris's identity has been stolen and their life savings - all the money from their house sale in England that was going to finance their new life in France - had disappeared. A bank account had been opened in Chris's name in Spain to take the proceeds. Then they're abandoned by the police forces of four countries who all insist the crime belongs in someone else's jurisdiction.

The French say it's an Irish crime as that's where the money was held. The Irish say it's French as that's where all the correspondence came from. The British say it's nothing to do with them even though forged British passports were used to open the bank account in Spain. And the Spanish are on holiday - and can't even think about investigating any bank account for at least four weeks.

So Chris has to solve the crime himself. But unlike fictional detectives he has an 80 year-old mother-in-law and an excitable puppy who insist they come along if he's going anywhere interesting - like a stakeout.

What listeners say about French Fried

I didn't find the story very interesting or compelling and the narrator reads it at lightning speed, about 3 times as fast as necessary. The true measure of a book is whether I'd buy it again and I would definitely not buy this. The reading is so frenetic it makes me very jumpy and it is not at all a relaxing and enjoyable experience listening to this. Very disappointing.