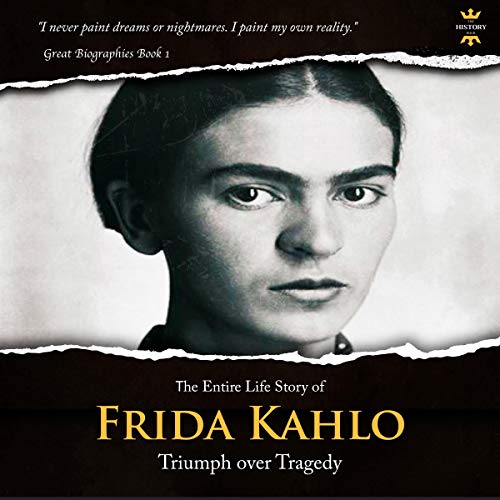 Written by: The History Hour
Narrated by: Alana Marie Cheuvront
Try for $0.00

Frida Kahlo was ahead of her time. She was bisexual and would have fit in perfectly in the time we live in now. Her disabilities would be acceptable in our society of today and her husband, Diego would probably be run out of town by the Real Housewives of “Cheaters”.

Frida came with a lot of baggage in her life starting when she was only six years old and even more baggage piled on when she was in high school. Her suffering was more than anyone can imagine but she kept her head held high and forged her way forward.

Inside you’ll hear about:

If Frida had not had a unibrow, waxed her upper lip, and shaved under her arms, she may have appeared more feminine than she did, and it may have given her more self-confidence. She never gave herself a chance because she felt it was her job to be the boy in the family.

What listeners say about Frida Kahlo: The Lonely Artist. The Entire Life Story

this is by far not worth paying for. it is not a biography as much as it is a critique and harsh judgement on her life. there is also so much about Diego Rivera that I had to go back and make sure it was not a dual biography for both of them

The author begins the book with so many prejudices like (I'm paraphrasing here) "Frida was ugly but could have had any man she wanted, I cannot fathom how!" The biography definitely did add to what I already knew about Frida Kahlo but is no way in-depth and provides no insights whatsoever. I have no qualms in suggesting to skip this book.

I recommend audible remove this book from its content. it's a sensationalized account full of opinion and innuendo not worthy of being called a biography.

I got the impression that the author did not like Frida. They took someone who is amazing and had a fascinating life and made it boring somehow and constantly shamed her. It is also poorly written, the choice of timeline and story telling was absurdly confusing and only served to constantly dig at her in a very biased way

This book bounced around which was whatever but the ending all of a sudden suggested atheism had some connection with infidelity and made assumptions about loss of pregnancies so yeah, no gross.

this is a terrible story.

i only made it through the first few minutes of this book. the author is incredibly unsympathetic to frida and her life situation calling her manipulative and ugly at times and expressing and inability to understand how people could be attracted to her. she mentions her childhood disabilities and how she later uses illness and injury to gain fame and attention. she doesnt seem to mention the train car accident that caused the majority of the artist's pain in life. or maybe she does later. i dont know i was too offended by the beginning statement of the story to listen anymore. not recommended at all.

This reads like a mix between a middle school essay and gossip magazine. The author sounds like a mean-girl type teenager, has no art background or art education and can’t seem to get past Frida’s appearance, even at one point suggesting she should have waxed her facial hair so that she could have been happier in life?! The organization is awful as well and goes back and forth in timeline inserting random quotes and observations. Don’t waste your time or money on this.

Author starts off the book as sexist as possible, providing a scathing review of Frida and Diego’s personal appearance. The book then goes on to discuss all the rough parts of her life, medical history, etc for about 6 chapters and then discusses her death with several chapters remaining in the book.

The flow is horrible, and any insights you want to gain into the person that was Friday Kahlo are not to be found here.

Terrible. Do NOT buy.

If I could put no stars, I would. This is not an objective biography. It’s gossip girls. This should be removed. The white privilege these authors must have.

Maybe if she shaved?

This book has to be kidding. To say that if Frida shaved her unibrow, her mustache and her armpits she would have been more attractive and happier is disgusting. While writing about a woman who made a point to paint women as they are this book still manages to smother Frida with stupid beauty standards. No stars.