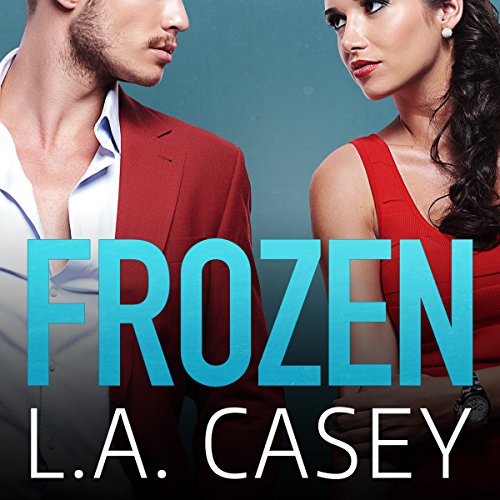 There's one must-have toy this Christmas, and Neala Clarke has told her niece Charli she'll get it for her. Never mind that she's got less than a week and it looks like everywhere is sold out. She's promised Charli a Fire Princess doll - and Neala is a woman of her word.

Darcy Hart is a people-pleaser. So when his adorable six-year-old nephew, Dustin, asks for a particular doll at the last minute, he says yes. Luckily for Darcy, there's one left in stock at the local toy store. Unluckily for Darcy, he's not the only person who wants it - and his rival is the one woman who's immune to his charms.

Neala and Darcy have loved to hate each other since they were kids, and they're both willing to do whatever it takes to get that doll. This can't possibly end well for both of them...can it?

What listeners say about Frozen

OMG this book, I can’t even tell you how funny it was. I laughed till I had TEARS, till my sides hurt.
And I am still chuckling. Why did I put off reading this book!

Not only did I get the audio version, but it come with 2 phenomenal narrators who brought this story to life. And the accents!! I have I mentioned I like accents. I soooo do.

And there rivaly didn’t stop when they hit their teens or there early twenties. Not Twenty five and forced to play nice because the moms have had enough of their antics, the tricks and the tension they bring to the families when they are all together, which is a lot because their families are so intertwined.

“I’d have to be vigilant and guard my nipples, but other than that it’d be fun.. right?” – Darcy

Only when Neala promises her niece a doll for Christmas and its sold out everywhere she tries on last store, and who happens to be looking for the very same doll for his nephew… Darcy.

Things only get funnier the more this book goes on. I soo don’t want to give anything away so I will leave you with this…. A bird that can throw down an insult like you wouldn’t believe and one crazy Christmas you won’t soon forget. My sides and face can attest to this.. I think I smiled to much is that even possible?

*You don't have to like my review but its 100% my opinion and I am allowed to have it.*

I enjoyed this story but I did find the beginning a little slow. The arguing and fighting was funny at first but it went a little overboard for me and had me rolling my eyes a few times. I have to say that I loved it after they are in the house though. They have great chemistry and the love story is very sweet. The ending made this book for me <3 The narration is great too!

Absolutely adored this romantic comedy! It was cute, funny, and had me laughing hard. I loved how the plot borders on the thin line between love, and hate!

I was curious if L.A. Casey would be able to pull off an entertaining story that revolves around two people out to get their hands on the last toy doll for Christmas. Not only did she pull it off, but she far past my expectations with the plot, and delivered a spectacular tale. It was funny, sweet, and heart warming!

Alana Kerr Collins, and Alan Smyth narration was A W E S O M E! They really brought the characters to life, and their performance made all the hilarious scenes 10X's better! I would definitely listen to future books narrated by either Collins or Smyth!

I enjoyed this story, it was worth every minute!

What did you love best about Frozen?

Really enjoyed the excellent accents in this audiobook, both narrators did a great job.Many laugh out loud moments, if you enjoy rom-com you will enjoy this book. Excellent charators and really great writing, this is my first book by the author.

Seriously so worth the credit!! I've been listening to many intense books lately and this was the book was the perfect break from all of those stories. It was laugh out loud funny. The characters had the perfect mix of "I hate you" and sexual chemistry to draw you into their antics. You don't even need to pick a side in their war, you can cheer for them both as they try to get their way, as long the pranks keep the laughter coming. Also, the narration is great!

A squabble that started between two friends at 10,turned into a fifteen year feud.The families(who both are close enough in friendship)to be practically family,decided...enough was enough,tired of the pranks,tired of the ruined gatherings and tired of the overall constant tension between the two,devised a plan two basically,barricade the two together in a cabin during a Winter storm to duke it out and either kill eachother already and get it over with or make up and make out.Pretty much all of the above happened.Their feud turned into one night of hot,steamy romance..until they figured out that the family had devised their temporary entrapment.Well,more feuding and fussing for another few days,before Neela(the stubborn girl)decided to finally forgive everyone and move forward...but she won't be forgetting.Fun,funny story.Loved the Irish accents.

I really liked this book

I laughed so hard while reading this book. I didn't want to put it down until I finished it.

sure it's a little immature, but seriously adorable and hilarious. I enjoyed it immensely. The narrators were absolutely perfect and just made the story even better.

SO FUNNY MY CHEEKS HURT FROM LAUGHING

If you could sum up Frozen in three words, what would they be?

What other book might you compare Frozen to and why?

MEN IN KILTS by Katie MacAlister. Easy fun story that makes you laugh out loud and love the heroine.

Have you listened to any of Alana Kerr Collins and Alan Smyth ’s other performances before? How does this one compare?

This was my first but they did a great job!

Best comedy of the year. A must see!

I will be purchasing more by this author. She is funny, and her book played like a movie in my head. Hilarious.

The characters were funny. I loved how family got in everyone's business. I hope this becomes a series!