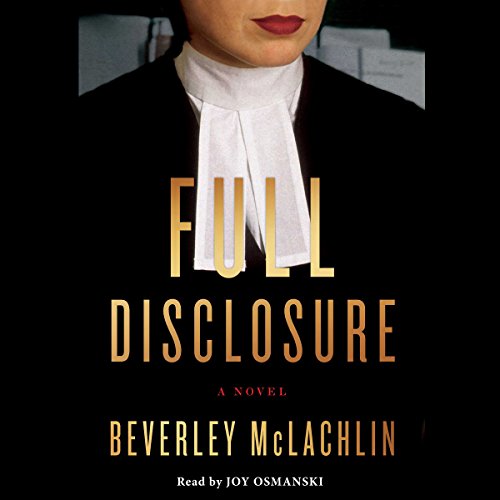 Written by: Beverley McLachlin
Narrated by: Joy Osmanski
Try for $0.00

From the former Chief Justice of Canada comes a riveting thriller starring Jilly Truitt, a rising, young defense attorney faced with a case that hits close to home. A searing look at what justice means in the courts and on the streets, Full Disclosure is perfect for fans of Kathy Reichs, Louise Penny, and Lisa Scottoline.

When everyone has something to hide, the truth is the only defense.

There’s nothing Jilly Truitt likes more than winning a case, especially against her former mentor, prosecutor Cy Kenge. Jilly has baggage, the residue of a dark time in a series of foster homes, but that’s in the past. Now she’s building her own criminal defense firm and making a name for herself as a tough-as-nails lawyer willing to take risks in the courtroom.

When the affluent and enigmatic Vincent Trussardi is accused of his wife Laura’s murder, Jilly agrees to defend him, despite predictions that the case is a sure loser and warnings from those close to her to stay away from the Trussardi family. Determined to prove everyone wrong, Jilly investigates Laura’s death, hoping to discover a shred of evidence that might give the jury a reasonable doubt. Instead, she is confronted by damning evidence and uncooperative witnesses at every turn. Someone isn’t telling the truth, but who?

With her reputation and Vincent’s life on the line, Jilly tries to unravel the web of secrets surrounding Laura’s murder. As she digs deeper, she uncovers a startling revelation that will change not only the case, but her life forever.

From the gritty streets of Vancouver to the fateful halls of justice, Full Disclosure is a razor-sharp thriller that pulses with authenticity and intrigue.

What listeners say about Full Disclosure

This is a fast paced and 'never dull' novel. Although I figured out the ending long before I got there, the story and the characters kept me engaged. As a lawyer, I particularly appreciated how accurately the Canadian Court System and law was portrayed. This must have been a joy to write after so many years of writing decisions for the Supreme Court of Canada. I really enjoyed this book and eagerly await more.

Would be okay decipherable if you knew the storey line ahead of time but poor narration of you don’t!

The book is well written. Our protagonist is Jilly Truitt. She is a defense attorney. She takes on the case of Vincent Trussardi who is accused of killing his wife, Laura. I enjoyed learning about Canadian criminal law and the procedures alone with pomp and circumstance of a Canadian criminal trial. I have read lots of courtroom drama novels taking place in the United States and in Britain, but this is my first taking place in Canada. McLachlin located the story in Vancouver, British Columbia with all of its beautiful scenery. Taking into consideration this is McLachlan’s first novel, it is well done. I am looking forward to the next book.

The book is eight hours and forty-five minutes. Joy Osmanski does a good job narrating the book. Osmanski is a Koran actress and voice artist. She has won three Audiofile Earphone Awards for audiobook narrations

I was so excited to read this book, given that it was written by Canada's former Chief Justice. The storyline, although good, was void of enough detail, and the character development was virtually non-existent. The narration was alright, but the whole thing left me feeling a bit disappointed; I suppose being a Chief Justice was ultimately a far better fit. So in conclusion, it was not a bad book, but I had higher hopes.

The story was very predictable. The narration was odd. Sometimes we were given a british accent, but the story takes place in Canada. If the narrator was going for a french accent she failed. There was an angsty immaturity about the story.

Simple plot. Unbelievable developments. Couldn't relate to anyone. Another rich lawyer story.. Not for me.