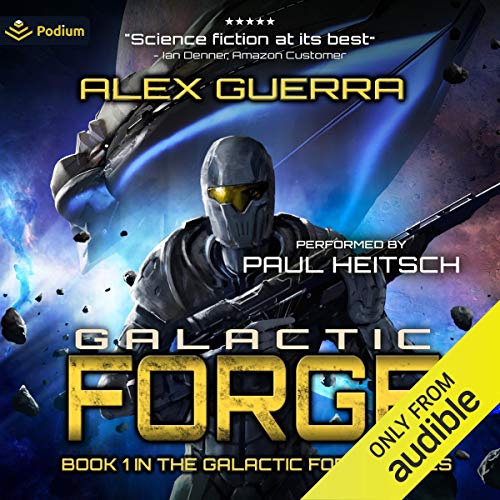 Former Marine Arthur Holland’s destiny begins when an aircraft crashes on his property in the mountains of Colorado. He moves to investigate and to help any survivors, but the closer he gets the less control he has of his movements.

An unknown force urges him to open the door of the mysterious craft, discovering the secret that lies within: a dead, alien pilot and a peculiar, otherworldly crystal. If that wasn’t enough, the crystal feels like it is alive. That’s when he hears a single word inside his mind: run.

An enemy vessel approaches overhead in pursuit of the downed ship, leaving Arthur little time to make his escape.

Guided by this strange voice, Art is propelled through a hidden portal, arriving somewhere unknown. On the other side of the galaxy, without a means of returning home, he has no choice but to move forward and help the crystal accomplish its mission: upgrade the ancient derelict ship, recruit new allies, and help the Galactic Conglomerate fight the Vael Empire.

It may be destiny that’s called him, but it’s the choices he makes that will forge his future.

What listeners say about Galactic Forge

I all ways give each book its do . never going into story expecting to like or dislike it based on anything but how I feel the story resonates to me . I’m a sci-fi / fantasy nerd , I’ve have hundreds of books audio and digital.
This is a interesting story , I have read something to the effect that it’s too similar to some other book or books .
I don’t see it personally. This is a more down to earth outer space story . The characters and story have more weight and can stand by themselves . Also the relationships are more dynamic interesting not just a forced love interest . I did have a few gripes about the MC attitude after a bit but , that’s my opinion.
I’m looking forward to what come me next in this story , the narrator is a good fit for the role .

I enjoyed this story, but

New concept, albeit somewhat familiar to another story that I listened to!

My main irritation is that for a marine, the main character does a lot of whining, which has become annoying! The guy needs to "man up"! 😁

Kind of a yawn

I wanted to love it, it is my kind of story but it just couldn't keep me interested. I don't think the characters shared much personality with us or they are just boring people.

Two humanoids walk into a bar... a the girl turns out to be a princess... the bad guys are with the empire... it’s as weakly written as it was conceived.

The mc has no development, same in the beginning same in the end. Mc was a whiny a** and stayed that way.

I generally like this genre in all forms but this example is poorly written and poorly conceived. Sending it back.

pass if your not into 3rd person past tense story

Narrators voice was fine, but the material he was delivering just doesn't work for me.

and entire 1st chapter in 3rd person self reflection past tense from the perspective of the main anatagonist sent me fleeing to return this and head for a different selection.

Interesting book that Leeds you to a colossal universe

The story makes you feel like the start of a Jedi book then turns left and then the main character has no idea what he has gotten into and evolves from their.

The story has a lot of standard elements that make a story interesting. however, I found myself not believing many of the background elements that drive decisions...or the decisions themselves. So, while the story is interesting, it feels weak. If the support structure to various motivations was re-written, the book could be quite good.

The performance is good....and helps cover some of the books weakness.

Good story. Not great, but interesting. Not sure what it was, but something about it made it a bit difficult to always stay interested, thus the good, but not great.
Listened to this as part the titles included in membership. Would listen to the next if it were included, but not sure if I had to pay a credit, I'd probably pass on the next for now & put in my wish list in case a future sale comes up or it gets added to the included titles down the road.
Story had alot of convenient & far flung tech. Things were a bit vague, or maybe not quite right, which made it hard to decide if the world felt well put together or not.
Narrator was good on male voices. A few of the feminine voices were a bit too feminine in an off putting way for me, but not terrible.