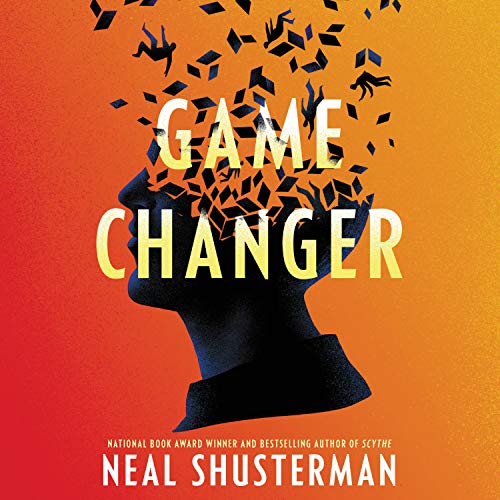 An explosive new novel by the author of the National Book Award-winning Challenger Deep and the New York Times best-selling Arc of a Scythe series, about the limited ways we see our world - and how a jolt out of the ordinary can upend the universe.

What listeners say about Game Changer

look all you need to know is, it's a 80's concept but with 'today's issues' and it clashes with the concept and subject matter, and at point it feels more like an essay than a story

Great title exploring life from the perspective of what if we dont accept the reality we are in but create our own?

The critics and publishers description were extremely vague and I feel misleading. There isnt a bunch of sci-fi stuff going on here, and no time travel, merely an unexplained dimensional shift where various time threads are explored in the main characters lives. The story line is an exploration of various aspects of our lives and what happens if we make this change or that change. How does it affect our lives and how does that affect our friends and families?

Questions asked through this story telling are quite relevant to young minds in this day and age. I feel it should be disclosed that many valuable lessons in life are explored and the reader is encouraged to think about their own life choices and how they have or would react in certain situations. at one reality shift, the protagonist is in a reality where he is (or perhaps becomes?) gay. The choices made and descriptions given I feel are worthy of exploration and this book would be well received on any HS reading list. I felt like there should have been more of this mentioned somewhere in descriptions of the title.

Read only if you want to be preached at on every page. Couldn’t get past the moralizing to enjoy the story. Very frustrating.

I enjoyed the story, but have done without Shusterman shoving his social views down the readers throat. All if his books have a social tone, but this one was over the top. Therefore if you are white, a male, middle to upper class, and heterosexual just know you are wrong in everything you do and say. As long as you know that this is a good read. Please just tone it down Shusterman not every person described above is as bad as you want your readers to think they are.

Interesting and thought provoking concept. As in any work of fiction, some suspension of belief is necessary. Game Changer is no different, the idea of a protagonist going through different iterations of reality and literally seeing the world through different points of view was great. Neal Shusterman is a talented writer, and if you're a fan of his other works, this one will keep you engaged as slowly descend deeper into the plot.

My only real critique is the less than subtle social commentary. It is not unusual for writers to have a left-leaning/progressive bent that gets revealed through their writing. However, typically authors, including Shusterman, tend to be more artful about how it is conveyed. The woke, race conscious messaging in this book hit you over the head pretty hard. The protagonist's white privilege racial consciousness revealed through his interactions with his Black best friend is so obtuse it borders on parody throughout the story. I thinks it detracts from the story, because it made the protagonist's best friend incredibly one dimensional and it centered on his race, nothing else. All the other characters, from the protagonist's female and male love interests, his primary antagonists, and tertiary antagonists, all reveal themselves to have far more complex motivations.

The issues the characters face that are framed as racial conflicts are better explained through classism and the importance of intact family structures than anything else. The protagonist's Black friend that is headed to college on a football scholarship was raised in a nuclear family with a present father and mother figure.

Besides that, it is engaging, well written. The narration is fantastic. The characters are, for the most part, intriguing and multi-dimensional. Not my favorite Shusterman book, but still interesting.

This book struck a cord with me that i wanted in other books by neal shusterman. His books always have likeable characters. And a premise that makes you think. And this really feels like everything i loved about Scythes, Unwind, soul shards and everlost. But the stakes didnt matter much to me. The characters drove this story at a pace that made me wanna see where the next chapter would go everytime. Personally i was thrown threw a loop that the main character is a typical jock on the surface. His main thing is football. something i thought imediately would make him less identifyable. i was thankfully wrong. Ash was a pretty cool protagonist and i loved his arch.
The Romance felt very good, something hetorsexual writers often forget is Gay people are people. All too often people write a gay couple as cliche or a joke. but I knew imediately this author knew his stuff. i loved all dynamics that were explored. it reallt makes you think about other peoples points of view. i hope this book has a sequel. Hopefully with a new cast but the same idea.
It was wonderful and im glad i listened.

Live in a different timeline

A far cry from the world building, depth, entertainment and plot of Scythe. If you like continually being reminded that Neil is all about diversity and he's as woke as woke can be, buy this book. If you prefer your entertainment more enjoyable and less racial non-fiction, this is the book for you.

Liked his other books, so...

I liked his other books so i picked this one up but, it was hard to get through. Maybe I'm just not the right audience for the type of story but I really didnt enjoy it at all.

I loved the Toll, Unwind, and other books by author, but this one was just hard to finish and seemed to drag on. I think the ideas were good and am glad to see books that tackle some of the subjects covered, but the book felt lacking. Unwind blew my mind and I felt it was a understanding way to cover topics, this book felt rushed and trying too hard to make a point, and just lost its story somewhere. The ideas didn't feel new or refreshing, if anything it felt like someone read one of the author's other books and thought " I'm going to try to write a thoughtful story like he does," and failed.

I loved this book. I new, creative and interesting concept. Characters were well thought out and sun to listen to. The performance was fabulous. I highly recommend.