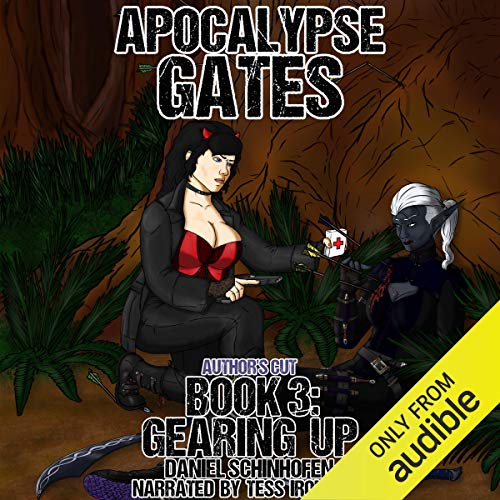 Written by: Daniel Schinhofen
Narrated by: Tess Irondale
Try for $0.00

Alvin had another rough week, but at least this time, he had Gothy with him.

Travelling from Utah to Nevada, they were able to set up two more Settlements. Then they had to visit the world of Fey to rescue the kids of the Beatty, Nevada, Settlement. Just when things looked like they were going well, the Developers got involved.

With the very rules of the game changing, Alvin found himself in a new position. Gothy pledged herself to him through the game system, leaving her collared and bound to obey his every whim. Coming to terms with their new relationship, Alvin wondered what would come next.

He wasn’t expecting a road trip north to loot an abandoned town, nor the dragon that guarded it. What came as the biggest surprise was the chance encounter with a fantasy race whose gate had opened. What would come of this fateful meeting?

What listeners say about Gearing Up

Having a 16 year old girl get raped and tortured (flayed) was sickening, ruined my whole day. Then later there is wife getting gang raped infront of her husband. This book made me lose any respect I had for the author. I can't believe that so many people gave this 5 stars.

All the sex scenes and sexual innuendo also gets tiring and just annoying, I end up skipping most of it because there is just so much of it. The author seriously needs to get laid.

I have regretted purchasing books before, but never have I been so disappointed that this book series is in my library. Last book I ever get fron this author.

Love the book characters story all get 5 stars. To me the narrator was good but I much more enjoyed Andrea Parsneau as a narrator.

Just like in the Daniel Shinhofen's "Alpha World" series; the world building takes a back seat in the third book. So now that world building is gone we get to focus on the relationship of the MC and Gothy. Alvin becomes even more of an ass and Gothy encourages him to be even worse. I didnt enjoy the direction this series decided to take. Sadly I think this is were I leave.

I don't mind the sex scenes, but more of the story itself would be appreciated. Too much of the sex stuff just makes it tedious.

I feel like it has been dumbed down since book 1

I'm sad I enjoyed book one so much Becky went from an interesting love interest to a willing sex slave. I'm really disappointed.

And what a story! The world keeps getting richer, and you often never know what’s going to happen next. No matter how bad things get, our dynamic duo manage to work their way through with style, snark, and a - in this world - healthy lack of anger management.

if you like hot sex scenes and a bunch of zombie murder and mayhem this series is for you.

Great story and narration!
(a new narrator for this book - Tess is great and does a great job!)

Our favorite zombie hunting and monster slaying couple is back and at it again! More settlements! More epic monster battles! More adventure! Alvin's room gets upgraded into a base, and Gothy gets her very own sex-dudgeon. What could possibly go wrong? Oh... and Dragon slaying - can't forget about that!

Another fun book, and great continuation of the series!

Note:
This story is Haram Gamelit and this book contains several explicit scenes with a more S&M vibe.

While the change of narrator changed....

... She is one of my favorite narrators and she had made sure you know each character by voice easily. I enjoyed the book and only want more of gothy and kuro. Oh and Hero can come as well. I was one of the biggest donators mentioned in it. I promise