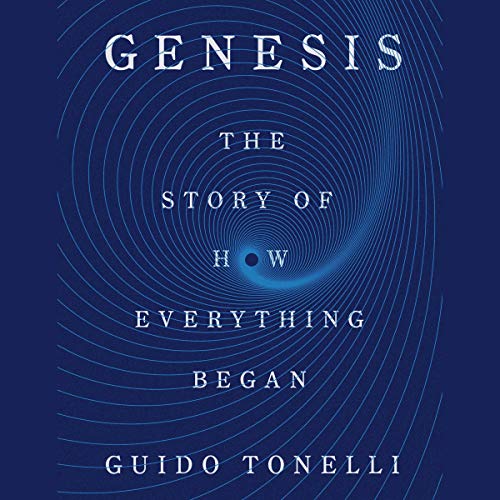 A breakout best seller in Italy, now available for American listeners for the first time, Genesis: The Story of How Everything Began is a short, humanistic tour of the origins of the universe, earth, and life - drawing on the latest discoveries in physics to explain the seven most significant moments in the creation of the cosmos.

Curiosity and wonderment about the origins of the universe are at the heart of our experience of the world. From Hesiod’s Chaos, described in his poem about the origins of the Greek gods, Theogony, to today’s mind-bending theories of the multiverse, humans have been consumed by the relentless pursuit of an answer to one awe inspiring question: What exactly happened during those first moments?

Guido Tonelli, the acclaimed, award-winning particle physicist and a central figure in the discovery of the Higgs boson (the “God particle”), reveals the extraordinary story of our genesis - from the origins of the universe, to the emergence of life on Earth, to the birth of human language with its power to describe the world. Evoking the seven days of biblical creation, Tonelli takes us on a brisk, lively tour through the evolution of our cosmos and considers the incredible challenges scientists face in exploring its mysteries. Genesis both explains the fundamental physics of our universe and marvels at the profound wonder of our existence.

What listeners say about Genesis

My favorite aspect of this book is the information and description of the large hadron collider. I was expecting more discussion about quantum entanglement, but very quickly became engrossed with the progress physicists have made at understanding and predicting with the Big Bang at the atomic and sub atomic levels. He does a great job making it understandable to a non expert and walking the reader through the progression toward more complex structures. There is a great discussion on the inflation aspects of the Big Bang, and how matter came into existence.

The reader is very pleasant to listen to. I will probably listen to it again right away.