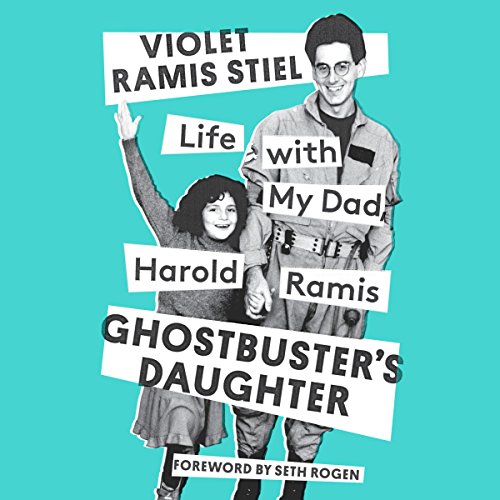 From the daughter of Ghostbusters star Harold Ramis comes a hilarious and heartwarming account of his life, work, and legacy.

Most of us know Harold Ramis as the filmmaker and actor who brought warmth and humor to the big screen in classics like Caddyshack, Ghostbusters, National Lampoon's Vacation, Groundhog Day, and National Lampoon's Animal House. To Violet Ramis, he was best known as an amazing father, confidant, and friend. In Ghostbuster's Daughter, Violet reflects on the life and legacy of her father, providing listeners with an extraordinarily candid and insightful look into the man who helped shape modern American comedy.

Funny, endearing, and vulnerable, Ghostbuster's Daughter takes listeners into the personal life of an American comedy icon, from his humble roots in Chicago and his ascension into Hollywood superstardom to his personal philosophies on life, love, and filmmaking. While the book serves as a comprehensive biography of her father's filmmaking career, Ghostbuster's Daughter is also an homage to their special father/daughter relationship. Violet weaves anecdotes about her father's unique and devoted parenting style among stories of her own unconventional upbringing, ultimately allowing listeners to see a more vivid portrait of the man behind the camera. An incredibly personal biography as well as a charming family story for the ages, Ghostbuster's Daughter is an intimate look at one of America's preeminent comedy filmmakers.

“Stiel debuts with a family memoir that offers an intimate view of her father: writer, actor, and director Harold Ramis...a work sure to satisfy fans of Ramis, Stiel renders a three-dimensional image of her father as an emblematic figure in comedy.” (Publishers Weekly)

What listeners say about Ghostbuster's Daughter

Lost my father a couple of years ago, this really tugged at the heart strings. Loved hearing all the stories about his life and wisdom as a father.

Thank you For sharing

... I couldn’t stop myself from thinking, “what a spoiled brat” at so many points throughout the book. Given, she owns up to this spoiled brattiness and and isn’t completely disillusioned about herself, but I found her frustrating as she recounted some of her life events. Still, I listened all the way through as best I could. I enjoyed her reading voice and she truly reads it smoothly. I appreciate her not mailing it in, in all regards.

A heartfelt tribute to a truly great dad

A loss of a truly great father and wonderful artist. A look into the best of what we can be, flaws and all. To see Harold through his daughter's eyes is as heartwarming as it is heartbreaking. We, as a people, need more Harolds. People who, by simply existing, make the world a better place. Unjudgemental, accepting, and open minded to life in all it's failures and successes. Thank you Violet.

such a good book

Harold Ramis was my childhood hero. I grew up a Ghostbusters fan. this book is wonderful. thank you Violet for letting us share in life with you dad.

Let me start by saying thank you to Violet. She narrated beautifully and gave wonderful voice to her and Harold Ramis' life.

I laughed and cried and wrote down deep quotes from the book.

Sometimes just being a point of light on someone's path, wherever it takes them is all you can do.

I feel as if it only skims the surface

Overall this book is well worth the read. It does however leave you wondering how much was left unsaid and how many Harold stories are lost in the ether. I feel Violets love and loss in her words, so I chose to view this book more as a tribute than a Harold memoir.

The wonderful story of the life of Harold Ramis. Couldn’t stop listening. So very worth it.

Do not believe Violet could have done a more remarkable job of writing this book. It's tremendous! No other way to put it. Purchased it after viewing Ghostbusters: Afterlife. Mr. Harold Ramis will be know for generations for being a gentle & authentic person. He lived is life in meaningful & soul filling ways. Thank you for sharing this Violet. Somewhere Mr. Harold Ramis is absolutely thrilled with this, just like I am. Humbled to have been here to experience this book & your life. Thank you again!

A glimpse behind the curtain

Violet Ramis Stiel gives us a look into her life growing up with comedy legend Harold Ramis. As a fan of Ghostbusters and many other of Ramis' movies, it was a treat to hear about him as a father and his daughters perception of him. It was also hard to hear about his decline in his last 4 years and my heart goes out to Violet and the rest of her family.

Violet you told this story beautifully !

I just finished listening to your great story about your Dad! I loved every minute of it! I think what I liked the best, is that even though he had more children, he always managed to find special time with you, traveling to visit you, I never had that with my Dad! I wish I had Harold Ramis as a friend. Thank you for your story Violet!