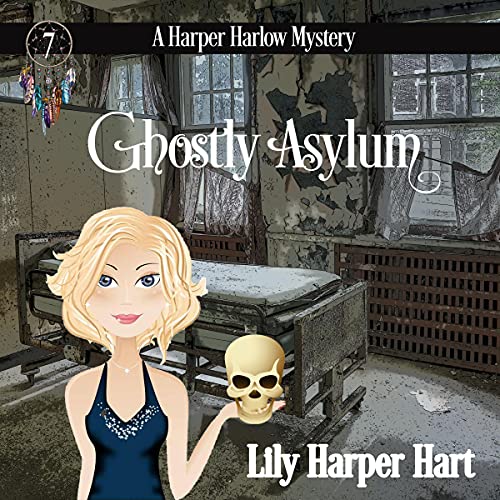 Something haunted this way comes...and it means big things for Ghost Hunters, Inc.

It seems Phantoms, one of the most popular shows on the Independent Ghost Hunting Network, is interested in doing a location shoot at Ludington Asylum, which just happens to be located on a small island near Whisper Cove.

Since childhood, Harper Harlow has been infatuated with the story of a crazy doctor gone rogue and the resulting investigation that found numerous missing patients (but no bodies) at the former institution. Producers want to feature Harper and Zander on their show, and Zander is happy to oblige despite Harper's reticence.

Sensing his girlfriend is struggling under the weight of her worry, Jared Monroe takes some vacation time and decides to tag along on what's supposed to be a three-day excursion full of mayhem and madcap adventure.

Not long after landing, people start disappearing and Harper's not convinced it's the ghosts running roughshod over the group. It seems they might have a killer in their midst, although unraveling the hows and the whys of an old mystery overlapping with a new one is anything but easy.

It's a race to the finish for Whisper Cove's favorite ghost hunter. She has to solve a mystery with ties to the past, save her friends and the man she loves in the present, and find a way to help the trapped spirits so they can look forward to a different future.

Of course, Harper has to survive herself to do it. Someone is bound and determined to make sure that doesn't happen, and it's going to take everyone working together to survive until the final day.

What listeners say about Ghostly Asylum

I enjoyed the story and character interactions. It was a fun read and I recommend it to anyone who likes light comedy and mystery.

This was a good story. I liked the characters, but I didn't care for Jarrod. He was an ass in this one. I think the writer minimized Zander, that was sad. but a good story nonetheless.

I love this duo. Harper and her best friend Zander are so great together. Where can I get a Zander?

This was a great little book. I love the characters and I am waiting for more in this series, so tell the author to hurry up!
Assuming the author didn’t embellish all the details, I actually learned a bit more about historical mental health treatments. There’s stuff in here that I didn’t learn in nursing psychology. I kind of hope it’s not all true.... quite ghastly! #Tagsgiving #Sweepstakes

With each book of this series I fall more in love with these books. This one is no exception. Entertaining and moves right along so you are never bored.

ANOTHER AWESOME BOOK IN THE SERIES!! MAKES YOU LAUGH OUT LOUD AND SMILE SO MUCH!! LOTS OF SURPRISES AND ALWAYS A GREAT TIME!!

My favorite book in the series

I LOVED this installment of the series. Not only has the characters developed and Angel Clark has become more mature in her reading the entire story actually held me wondering what happened...