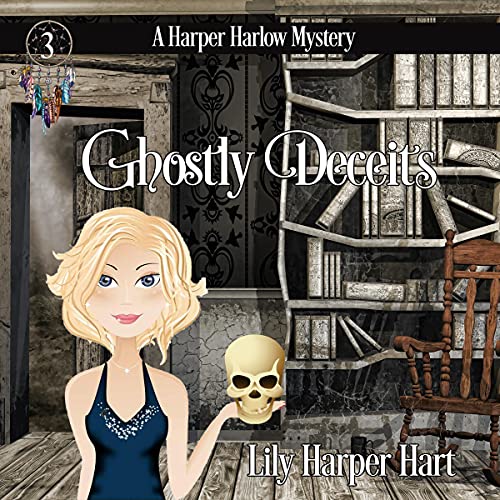 Harper Harlow and Jared Monroe are going on vacation. Sort of.

The newly minted couple are in a good place, so when Jared asks Whisper Cove's favorite ghost hunter to go to Harsens Island to visit an old friend and his family, Harper jumps at the chance.

Josh Stoker and Jared have a lot to catch up on, including the hard financial times the Stoker family is struggling to deal with. In an effort to keep their business empire afloat, the Stokers have turned their ancestral family home into an inn, and this week they just happen to be hosting a murder mystery event.

Harper and Jared are game to play, but when a real ghost shows up and a dangerous storm slams into the island, things spiral out of control. There's a murderer in the house, and Harper and Jared have to find out who it is before another body drops.

Jared doesn't want to suspect his friend, but no one is off limits. When the truth comes out, two murders will be solved and Harper and Jared will be in an entirely new place in their relationship - that is if they can survive long enough to get off the island.

It's all hands on deck for another ghostly mystery, and danger is the name of the game; unfortunately so is betrayal.

What listeners say about Ghostly Deceits

Bit better than the previous

Not sure if it’s the dialogue or the narrator, some parts seem a bit juvenile. But still a decent listen.

One of my favorite series!

Harper and Zander are the best duo! So fun to read! The narrator does snarky well!