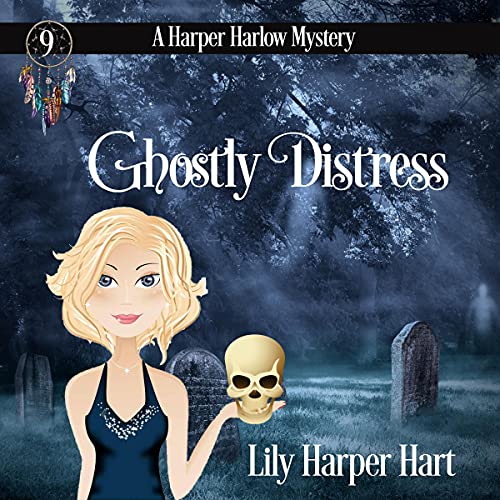 Halloween is right around the corner and Harper Harlow should be at her happiest. She's officially moving in with her boyfriend Jared Monroe, after all, and into a house that's right across the street so she won't be separated from her best friend.

All should be well - and it is - until one of Harper's customers stumbles across a dead body in the cemetery during a tour one night.

The woman, a local who worked at the bank, was last seen at a rather infamous party and her movements before and after that are murky. She has ties to a lot of people, and not all of them are upstanding citizens.

Even though she's tired due to the busy season, Harper is determined to get answers. Jared would prefer her taking a break from her investigative activities but turning her back on a soul in need isn't in Harper's nature. She's determined to find the truth and Jared promises to keep her safe while she does it.

Whisper Cove is hopping place right now and suspects are around every corner. Harper will have to dig deep if she wants answers … and constantly look over her shoulder to make sure death hasn't picked out another customer.

When the truth comes out, Harper will learn a hard lesson about life and death. Not everything is as it appears, you see, and sometimes a sad truth is worse than a convenient lie.

What listeners say about Ghostly Distress

Story did not keep me interested.
Voices were annoying
In middle of story there was skipping and cracklings

Adio performance - I normally love audio books, especially when it's one of my favorite authors /characters. I was mostly annoyed, this performance made everyone sound whiney and it was like nails on a chalkboard for a couple of the characters.
The book- really enjoyed this book. The characters continue to grow and Jared proves time again why he's the perfect book boyfriend. In this latest installment, Harper and Zander stumble across a dead body during one of their ghost tours. There are plenty of ghosts in this book, crazy get rich quick schemes, and too many leads to follow. As per usual, the ghost remembers too late to actually help the police or Harper. This is all going on while Harper and Jared are making plans to get moved into their new house as well. I definitely recommend this zany Adventure.

Yes, I love them all, even Zander. This is my second time through the series.

ANOTHER GREAT MYSTERY FULL OF SO MANY TWISTS!! AND OF COURSE CRAZY ZANDER!! LOVE IT!!

As always, an enjoyable listen. Harper and Zander have always been fun to follow on their adventures. Looking forward to further releases.