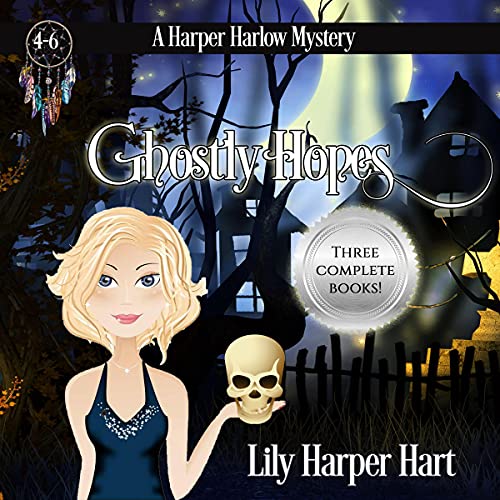 Harper Harlow has it all, including an exciting job, a best friend who serves as a constant source of amusement, and a boyfriend who makes her heart pinch...but in a good way.

She may hunt ghosts for a living (and help them pass over to the other side), but she often finds it more fun than frightening. Human beings and their penchant for murder and mischief is another story, of course.

That doesn’t mean Harper doesn’t find the occasional bout of trouble. That’s what she’s known for, of course, even though her boyfriend, Jared Monroe, tries to dissuade her from it whenever possible.

Join Harper and her merry bunch of friends in this three-book omnibus that includes Ghostly Worries, Ghostly Images, and Ghostly Wrecks.

Have a ghost of a good time.

I am a fan of this series. However, in book six, Harper’s behavior went from headstrong and impulsive, to careless and narcissistic. Some of the choices her character makes are those of a spoiled child. It changes the relationship dynamic between her and Jared in a disturbing way, making him a parent figure. I will continue with the series because I find it enjoyable for the most part. But at some point that kind of repeated behavior stops being entertaining.

These were much easier to get into than the first 3 in this series. However, I find that to be the case with most of her books under both names. She spends lots of time letting you get to know the characters which in my opinion makes the series' that much more fun to listen to.

I wasn’t initially sure how I felt about this series. I got it because it was available in the box set. That being said, I had to continue listening. I couldn’t help falling in love with Zander, for whom my bird is now proudly named! #Tagsgiving #Sweepstakes

I love it when I am able to receive 3 books for the price of one. Love this author.

Revenge of the Worst Nickname for a Girlfriend

Again I enjoy the stories, I enjoy the characters. At least when Jared isn't acting like Harper's father, telling her what to do and issuing decrees. By the way, the worst place to have someone lay low is in their home, right where everyone can find them.

The narrator is awful. Most of the dialogue seemed to have at least 1 character screaming while described as sarcastic, disappointed banter. It's tough to listen to Angel Clark. The stories aren't bad but would probably read the books before I listened to another one. The thing that bothered me in the stories were characters being feminist and narrative describing people by their appearance only. Also terms like looking for his blond, his woman are not true to characters ideology.

Once you get used to the narration. It gets better. The stories are light, and fun. At times a little slugish, and slushy with the romance but if the target audience is a teenager, it is great. I was not as interested in the romance parts, I did love the stories.

love to listen to light hearted stories while i work. fun book. fun listening . loved it