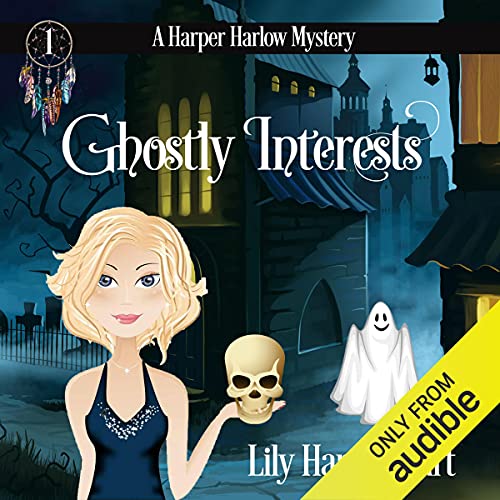 Harper Harlow lives in a world of ghosts.

She's not embarrassed by her abilities, and she's not afraid to be who she is. She's also not looking for a relationship.

Enter Jared Monroe, a smooth-talking police detective who sees things in black and white and ignores any shades of gray. He doesn't believe in ghosts, and while he's intrigued by the feisty blonde ghost detective, he's not interested in the paranormal.

When 21-year-old Annie Dresden's body washes up on the beach of Whisper Cove, Harper and Jared collide. Sparks may be flying, but so is confusion and mistrust.

Harper calls on her loyal band of ghost hunters to solve the crime, and Jared relies on his training to tackle the same problem. It doesn't matter what approach they take because all paths are destined to intersect.

Can Harper and Jared learn to work together? And, more importantly, can new ghosts let go of the past and give in to an obscure future? It's anyone's guess when big personalities go to war and find they might have more in common than they think.

What listeners say about Ghostly Interests

I really don't like Angel Clark's narration; her voices are ruining this for me. She makes the main character, Harper, sound like a nasal-y twelve-year old when she is supposed to be in her late 20s. Very annoying voices. She also tends to slow way down and almost sound like a robot reading at odd times. I am going to listen to samples before I buy from now on.

the narrator was horrible....

The story was good but the narration was horrible. Angel Clark tried to change her voice for the male parts and failed miserably at it.
The Author had plenty of funny lines in this book that actually made me laugh out loud at times. But the story was good enough that I kept listening even though the narrator was horrible

This book was a light listen not to exciting but is pleasant enough. The narrator though...I don't understand why people who have this job feel the need to actually yell. Most people are hearing the books through earphones and this should be taken into consideration, she actually yells in parts the require a raised voice and even in parts that do not but that in her mind she thinks it is appropriate. I will have to read the reviews before I go to the next book because if she is still yelling i can't continue. The book was slow paced and there was not a lot of action a very simple and predictable listen.

Love the story, the reader needs to stop SHRIEKING

Would you consider the audio edition of Ghostly Interests to be better than the print version?

I prefered the book because I didn't have to listen to the reader constantly screaming and shrieking. I kid you not, I ended up putting the book on the lowest audio settings because the reader was like nails on the chalk board.

What was one of the most memorable moments of Ghostly Interests?

Who would you have cast as narrator instead of Angel Clark?

Love Amanda M. Lee's books, but this narrator did not do justice to the characters

I have listened to hundreds of audiobooks, and this is the worst narrator. It sounds like she's screaming throughout the whole book. It's a funny book and that's the only reason I managed to listen to the whole book.

Beware of the narrator

This is a cute story but the narrator is awful. I want to see where the next story goes to see if I'll continue with the series but don't know if I can handle the narrator again.
I think I may have to actually read the book and go on from there. Hopefully they get a different narrator for future publications.

The narrator annoys me

No. The narrator seems to be screaming out the different character voices.

What was most disappointing about Lily Harper Hart’s story?

Do you think Ghostly Interests needs a follow-up book? Why or why not?

Maybe with a different narrator

I can't even finish this book. I'm only on chapter 3 and I'll be returning this book now.

I bought this from Kindle Unlimited, thinking it might be cute. It ended-up being really witty and sometimes downright funny. The only drawback was that the narrator wasn't very good. She wasn't terrible, but she was often monotone and her voice is a little whiney. She also just couldn't capture the male lead. It made it hard to feel the chemistry between him and the female lead.

The voice grated on me a different reader maybe

What could Lily Harper Hart have done to make this a more enjoyable book for you?

The story was a disappointmentf she used the phrase "dead panned" so often it was funny.

one author to avoid

If you could sum up Ghostly Interests in three words, what would they be?

I liked the story, It was not too complicated. I did not enjoy the voice she used for Harpers mother or for Mel. her male voices have much to be desired.

Would you be willing to try another one of Angel Clark’s performances?