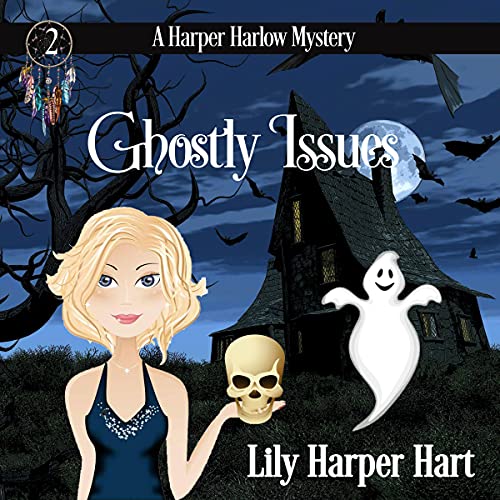 Harper Harlow has the world at her fingertips, and the weight of the world on her shoulders. Whisper Cove's resident ghost hunter finds that her professional life is soaring - while her personal life is floundering. She's on a man diet - and nothing is going to tempt her, or so she swears. Jared Monroe thought 10 days away was nothing - until Harper's anger hit him square in the face, and the heart, upon his return to town.

He didn't mean to hurt her, but a woman's anger runs deep. When a teenager is found in a local park, Jared and Harper find their paths intersecting...again. Derek Thompson may have been looking forward to a bright future, but now he's only looking back at a tortured past as his murderer runs free. Jared and Harper have to work together - and face their issues - if they want to put Derek to rest. Working together is a great idea...until their hormones get in the way.

Can this couple find common ground? And, more importantly, can the dark underbelly of Whisper Cove survive the sordid truth? Only time will tell, and Jared and Harper are running out of it.

What listeners say about Ghostly Issues

Book would have been an interesting read...except I couldn't stand the narrator ugh don't waste a credit!!!

This would have been a passable light summer read if it had a different narrator. She was shrill, constantly screeching and yelling and making Harper sound more like a Harpy! Grrr! It ruined what would have otherwise been a decent book.

the voices the narrator is doing arr quite annoying....not sure I can continue to listen. When she talks normal, pleasant to listen to but when she does a character very annoying

I'm not crazy about the narrator - some voices a little screechy. Harper's voice especially because she is main character

What made the experience of listening to Ghostly Issues the most enjoyable?

I liked the relationship between Harper and Zander.

It is a toss up between Harper and Zander. Their relationship is humorous.

Who would you have cast as narrator instead of Angel Clark?

I am not sure. Her male voices are not real good. The lawyers at the end sounded better than Mel and even than Jared.

I would like to read/hear more of her stories as at times I do not want to have to think real hard trying to keep the characters straight.

I couldn't get past the first chapter. I really like ghost stories and after the first book I had high hopes for this one. The beginning of the story starts off with the main character arguing with her business partner to he point of ridiculousness. It was like listening to my 6 year old fight with her friends. It was so unrealistic, no mature adult in the middle of a job would have such a ridiculous argument and piss off their client. I recommend this to teenagers who would like that kind of drama and don't know any better yet.

Narration ruined it for me

I can’t tell how much I might enjoy the story because of the narration. She YELLS dialog. It’s loud, shrill, and grating to my ears—even when I have the sound low. You may feel differently.

Thank Goodness that is over. I am done.

Thank Goodness that is over. I am done with this series.

Well the title is very fitting as this book has “issues.” I was hoping the issues with the first book was the author getting their feel for the series. Boy was I wrong. The author not only continued with the problems but expanded the bad and reduced the good to level that I just can’t continue with the series.

The main are characters are exceptionally immature and it only gets worse in this book. The main three characters act like spoiled four year olds with the thoughts of 13 years olds trapped in mid-20 year olds bodies. The characters bicker with each other constantly and it’s not “cute” like I think the author wants it to be. The relationships do not come off as realistic they come off as borderline unhealthy.

Where the series lost me was the author had the mystery take a back seat to the romance. It was almost an entire second thought to the story. I never got engaged in the mystery and I had a hard time being vested in its conclusion. The villain is obvious but the author did make him very evil and creepy.

I don’t mind the narrator’s voice but every character seemed to screech a lot and it was almost painful at times to listen to.

Writing style can be a bit juvenile in parts and the narrator can irritate with some voices. But still a fun read.

This is like a Buffy the vampire mystery. A lot of serious stuff is happening but the dialogue is always wit and adorable.