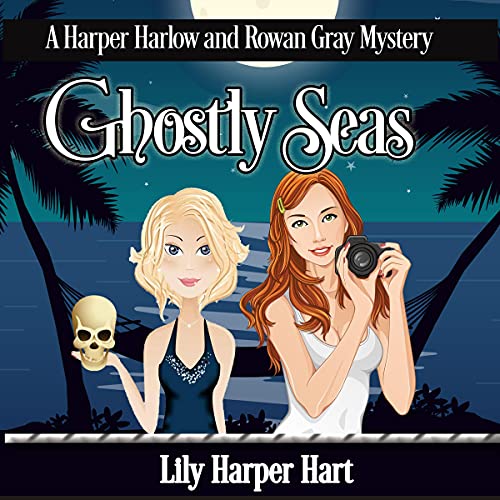 Harper Harlow is going on vacation. Sure, it’s not the romantic trip she was envisioning with her fiancé Jared Monroe - especially since her best friend Zander is acting as a third wheel when it comes to the long-planned cruise - but it’s a break from the weather and a chance for fun in the sun.

Rowan Gray is excited. She and her boyfriend Quinn Davenport are getting closer to solving a personal mystery, which plays into her paranormal past, and she’s simply happy doing her job on the bounding storm for the next few days. The promise of a life spent in the open is in front of her...but for now, her only concern is snapping photographs of the paranormal enthusiasts descending on the ship.

Hundreds of psychics and ghost hunters in one place makes for fun, frolicking, and frightening encounters. It also leads to murder. The only problem for those investigating the murder is there are way too many suspects.

Harper, Jared, and Zander find themselves in the thick of things as the investigation heats up. Of course, that means they’re butting heads with Rowan and Quinn, the people with actual authority on the ship. Both women are special, overflowing with gifts, but trust isn’t always easy.

Before all is said and done, two teams are going to have to become one if everyone wants to survive. It won’t exactly be smooth sailing but everyone is open to one heck of an adventure.

What listeners say about Ghostly Seas

I have read the Rowan Gray Mystery Series and love it--Narrator Kate Marcin is an excellent reader and all is good and I'm awaiting the next book.

I don't know what happened with this book---not worth the time to listen. Very Childish.

Sorry Lily Harper Hart. I do like your Rowan Gray Mystery Series and the narration---But I can't be expected to read this is series if it will continue in this manner.

A very entertaining supernatural cozy mystery/urban fantasy series. This one was a crossover of two different series by the same author 2 main characters come together on a cruise to solve a murder mystery. No spoilers you have to read to find out. But a very entertaining story with a great cast of characters and entertaining scenario. It captures you from beginning to end and concludes nicely at the end. It is a very well written story and well worth reading. Check it out

I usually try to be nice about narrators but Angel Clark’s voice scrapes my ear canal. I cannot listen to her voice for more than 5 minutes at a time and it’s stopped me from being able to enjoy several of Lily Harper Hart’s series. Every time they choose her for a new series, I immediately cross it off my reading list because I know that no matter how much I like the story or writing, I’m not going to be able to listen to it.

I love Harper, Jared and Zander and I love love Rowan and Quinn. Having them all together in one book is amazing.

ANOTHER MYSTERY AND LOTS OF FUN. THIS ONE HAS YOU HANGING ON TO SEE WHAT'S GOING ON!!

If only it had a different Narrator

The narrator makes every character hateful. You listen to the book and all you hear is screeching and yelling.

I adore Rowan Gray and the normal reader of that series. I have always felt that it was Lily Harper Hart's grown up books rather than some college age group of people that can only scream and yell at each other. I have come to realize, after listening to this one, that it was the reader that was bringing down the other series and not the writing.

I like all Lily Harper Hart and Amanda M Lee books. This one is a nice addition. Angel Clark as a narrator is always good with snark!

Love All the Zander

I love cross overs and this one was great. I especially love how much of Zander we get in this book.