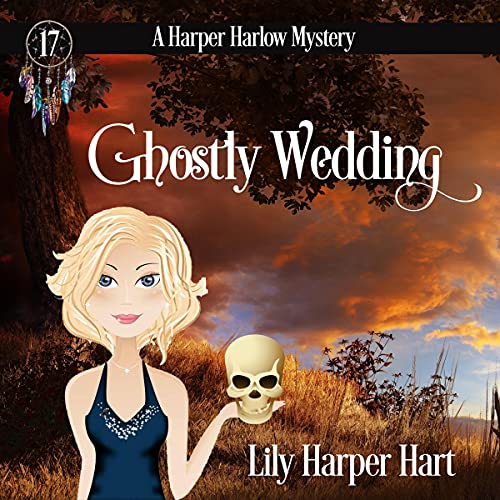 They just need to solve a murder before they exchange their vows and take the next step to happily ever after.

Peter Humphrey, an insurance salesman from a neighboring town, appeared to be minding his own business when a woman came out of nowhere and struck him down while he was crossing the street. Harper witnessed the accident and vows to solve the murder before it’s time to leave on her honeymoon.

It might take more work than she realizes, though.

Peter was a normal guy, a father who doted on his daughter and was friendly with his ex-wife, and yet somehow he had a secret. His ghost points Harper toward Montgomery Manor, toward a woman who suffered her own tragedy almost two decades before.

On paper, Peter’s murder and the Montgomery tragedy shouldn’t be connected…and yet they are. It’s up to Jared and Harper to figure out how if they want to enjoy their wedding and what comes after…and they’re both determined to do it.

Some things are meant to be. Harper and Jared believe their union is one of those things.

Prepare yourselves, because this is one wedding you’ll never forget.

What listeners say about Ghostly Wedding

Great story!! Laughs, suspense, love and tears. Always the best time with this group! A must read series
.

every book I have read has made me laugh out loud, sometimes cry a little, but always has me chomping at the bit for the next book.

there just Better be more! if you're anything like me, you'll be in tears by the time ms Clark says 'the end'. but they will be happy tears. it took a long time for Harper and Jared's big day to come, but it was well worth the wait=)
💗💗💗 and many thanx to ms hart!

I am a big fan of this writer and this series! Harper and Jared are getting married but first they solve a heartbreaking mystery.

This series is so good, you will want to reread them all. Can't wait for the next book in the series.