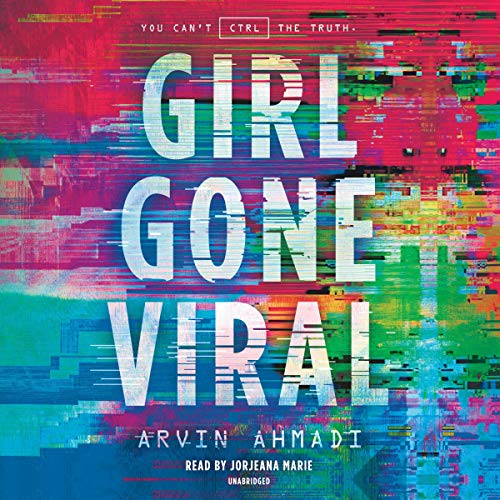 Perfect for fans of Warcross and Black Mirror, Girl Gone Viral is the inventive and timely story of a 17-year-old coder's catapult to stardom.

But she can't code her dad back into her life. When he disappeared after her 10th birthday, leaving only a cryptic note, Opal tried desperately to find him. And when he never turned up, she enrolled at a boarding school for technical prodigies and tried to forget.

Until now. Because WAVE, the world's biggest virtual reality platform, has announced a contest where the winner gets to meet its billionaire founder. The same billionaire who worked closely with Opal's dad. The one she always believed might know where he went. The one who maybe even murdered him.

What begins as a small data hack to win the contest spirals out of control when Opal goes viral, digging her deeper into a hole of lies, hacks, and manipulation. How far will Opal go for the answers - or is it the attention - she's wanted for years?

"Tense, twisty, and oh-so-timely, Girl Gone Viral is the perfect thriller for the virtual reality era. Don’t start this book unless you can finish in one sitting. I loved it!” (Brendan Reichs, New York Times best-selling author of Nemesis)

“In Opal’s story, Arvin Ahmadi has crafted a timely and gripping sci-fi tale, grounded in the technology that links us, and what finding ourselves within it can cost.” (Alex London, best-selling author of Proxy and Black Wings Beating)

I don’t often compare books to other books (especially in the same genre) but I blindly went into this book hoping that Ahmadi was going to create a world similar to the world that Eliot Peper was able to create in the Analog series. I was pleasantly surprised. Girl Gone Viral throw us into a futurist world that is a couple steps from Instagram and Facebook. Everyone is on WAVE – a Virtual Reality platform that everyone uses now. It allows its users to indulge in everything they’ve ever wanted.

Opal is a talented 17-year-old coder who is trying to find out what happened to her dad. She’s brilliant and able to create world in code that represent their real-life counter parts. 10 years ago, Opal’s dad disappeared. She was told by the police and most of those around her that either her dad ran away and didn’t want to be found or he committed suicide. There was a note – but that was cryptic. Opal had a very public breakdown and spent most of her childhood trying to find her dad.

So, when a contest is opened where the winner gets a meeting with the owner (and former business partner of Opal’s dad) of WAVE she enters. WAVE is the virtual reality company that every single person uses (think what Facebook wants everyone to do – only use their platform). Opal dives head first into a world that she’s only seen the surface of. It’s so much deeper and darker than she could ever imagine.

Ahmadi was able to create a completely believable world. He went with VR has his next step into the future and I can see that. He painted the picture so brightly that it all sounded like a Bob Ross painting. Everyone uses it and almost everyone loves it.

The almost part is where Ahmadi is able to sneak some politics into Girl Gone Viral. I thought he was able to sneak it in, in such a way that it didn’t feel overbearing. He used a few words that, to me, were obvious, but to others they might have read right by.

The overall vibe of Girl Gone Viral was a coming-of-age in the world of technology story. Opal is a fantastic main character. She is a deeply flawed 17-year-old (as most 17-year-old’s should be). She is selfish at times and headstrong in others. She falls in love hard and is able to do things that an adult wouldn’t be able to get away with. She’s one of those easy to root for good girls and by the end of Viral I needed to know what happened to her dad. I also wanted to spend some more time in the world that Ahmadi created much like I did in Peper’s Analog series.

If you enjoy technothrillers about near future technologies, strong and young female leads, and an overall good coming-of-age story – Girl Gone Viral will be right up your alley.