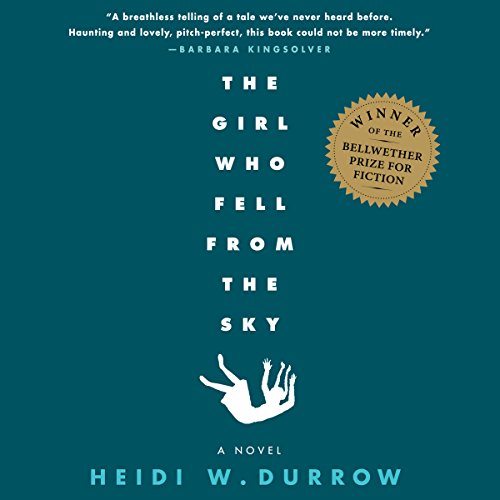 Girl Who Fell from the Sky

A timely and moving bicultural coming-of-age tale, based on a true story and told by an author who has struggled with the same issues as her protagonist.

The daughter of a Danish immigrant and a black G.I., Rachel survives a family tragedy only to face new challenges. Sent to live with her strict African-American grandmother in a racially divided Northwest city, she must suppress her grief and reinvent herself in a mostly black community. A beauty with light brown skin and blue eyes, she attracts much attention in her new home. The world wants to see her as either black or white, but that's not how she sees herself.

Meanwhile, a mystery unfolds, revealing the terrible truth about Rachel's last morning on a Chicago rooftop. Interwoven with her voice are those of Jamie, a neighborhood boy who witnessed the events, and Laronne, a friend of Rachel's mother.

Inspired by a true story of a mother's twisted love, The Girl Who Fell from the Sky reveals an unfathomable past and explores issues of identity at a time when many people are asking, "Must race confine us and define us?"

“[A] breathless telling of a tale we’ve never heard before. Haunting and lovely, pitch-perfect.” (Barbara Kingsolver)

Featured Article: 18 Award-Winning Audiobooks by Female Authors That Will Excite and Inspire You

Discover the best of the best from female authors with this list of audiobooks created by strong women voices. From historical fiction to contemporary love stories, this list has it all.

What listeners say about Girl Who Fell from the Sky

I never really believed the stories, or the characters. The 'pretend' mystery was not such a mystery in the end. Did she or didn't she jump? By the time the mystery is solved, this reader no longer cared.
None of the characters were developed in full and so we're left to wonder what on earth made them so messed up. So much of their misery (at least the adults) is self-inflicted, so it's hard to feel pity. The children turn out beautiful and talented anyway ("Brick", and Rachel).
This book would have been more effective as a short story. Indeed, it would have been more effective with an editor. When the author refers to "Jamie-who-was-really-James" for the thirteenth time in two paragraphs, I was gnashing my teeth with irritation!!
There was a lot of writing like this. "I'm making a point here, are you listening reader? because I'm being so erudite and stating things so poetically". The writing is very self-conscious, and the point the author was trying to make was never well realized in the characters or the plot. "It's hard to be of mixed race"? "It's hard to have been the victim of an attempted murder by a messed-up mother"? I lost interest in trying to figure it out. This book was unsatisfying.

Prompts You to Examine Cultural Stereotypes

I disagree with the other review that is posted in terms of the critique of the characters because I found their experiences and perspectives to be very thought-provoking. As I listened to the text, I didn't focus solely on the written (or spoken in this case) word. Instead, I took the opportunity to step into the shoes of various minorities and view the world through their eyes. What an enlightening encounter to peek into the lives of those who experience the world and differently than I.

With this approach, I found a realistic perspective of the ways in which my diverse group of students may experience the world and the stereotypes into which they are often placed by society. This was also an opportunity for me to examine my own unconscious perceptions of stereotypes. It is uncommon for a book to afford such an opportunity to its readers.

I would recommend this book to all educators, especially those who work with a diverse population of students. While I do agree with the other review in terms of the lack of development of the plot, I feel that this is midigated by the chance to view the world through someone else's experiences.

I struggled with this book. Between the lackluster reading and writing, it was a bust.

Admittedly I had to do it for a class so take the review with a grain of salt; BUT, the story and characters are unconvincing as well as just dull. I never once was drawn in to care about their struggles or troubles. Their climax (if you can call it that) left me yawning.

I will say however that the voice actors did an excellent job. I wish they had gotten a male to read the male characters parts but it still works since his portions are in the 3rd person.

It has a purpose, probably educational. Someone trying to educate themselves on diversity might find it useful.

Would you ever listen to anything by Heidi Durrow again?

Would you be willing to try another one of the narrators’s performances?

I got this for my book club. I prefer to pleasure read.

Would you try another book from Heidi Durrow and/or the narrators?

The ending seemed a bit disappointing. I would have liked to know more about what happened after they got a bit older.

Was Girl Who Fell from the Sky worth the listening time?

Enjoyed the sequence of events and the mysterious factor.

The girl who almost put me to sleep.

The central character is very interesting and the central action that drives the novel is certainly compelling. But there’s just a ton of extraneous detail that goes in all directions and really doesn’t add up to much. I listened to this in audio form and kept having to rewind it like, OK who is this person? Why are they important? Oh never mind they’re not. And by then I would’ve lost the thread of the main story. Finally I had to speed it up and listen to it at 1.5 speed and finished it while driving in the car. Otherwise I never would’ve finished it. I kept waiting for it to get good and it kind of just never did

The suspense with this book is profound. My mouth literally hung open at the end as I wasn’t expecting it. You will not be disappointed with this one. I specifically read this book because it was pulled from my county’s school libraries due to perceived “Critical Race Theory.” I can say history is history and should never be swept under the rug. It is because of the past, that changes can be made for the future. This was an excellently written book and the narration was outstanding. Thank you for it!

The plot is heavy and troubling. This book should be read by thick skinned people.