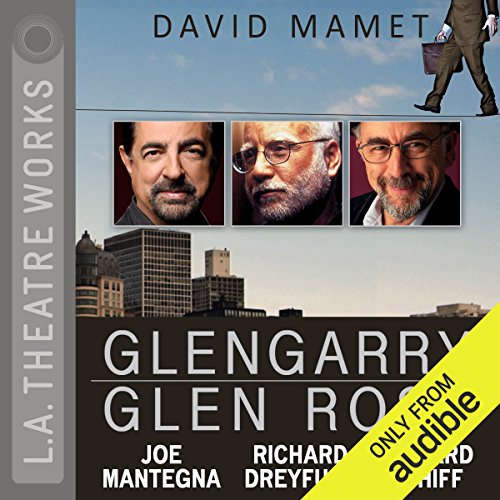 A group of low-ranking real-estate salesmen are trying to survive in a cut-throat office culture. But when two of them devise a plot to redress the company's wrongs, the resulting turmoil increases the pressure to unbearable levels.

A 1984 Pulitzer Prize winner for Drama.

Directed by Eric Simonson. Recorded by L.A. Theatre Works before a live audience.

GLENGARRY GLEN ROSS David MametRead by Joe Mantegna, Gordon Clapp, Kyle Colerider-Krugh, Richard Dreyfuss, John Getz, Richard Schiff, Josh StambergThis wonderful full-cast rendering of Mamet's 1984 Pulitzer Prize-winning play loses little in the staged recording. The gathering of vocal luminaries brings passion, poise, and panache to the narrative in a memorable audio performance. The subtle but completely appropriate sound effects are exciting and superbly amplify the angst and drama. There are seven active character voices, and while it's sometimes a bit difficult to keep them all straight, the natural flow of the story helps the listener stay on track with who's doing what to whom in this sometimes funny, sometimes brutally human drama. M.C. © AudioFile 2013, Portland, Maine [Published: NOVEMBER 2013] Poetry & Drama • 2 hrs. • Audio Program • ©1984

This play is beautifully presented. The actors are fabulous. (In my mind I kept hearing Fat Tony from the Simpsons every time Roma speaks, though. "Let us meet and greet this individual.")

I found it a bit challenging to follow some of the twists and turns in the story towards the end. That's not surprising as it is a play and if I had been watching it instead of listening while driving in rush hour traffic, I could have better segregated the characters and their actions in mind.

I did not take off any stars on that score, but may try to locate a copy of the movie just to get things straight in my mind once and for all.

I've never seen this play produced, but I have seen the movie so I was prepared for the strong language and palpable anger in the dialogue.......and these performers do a wonderful job. The anger and fear is almost palpable among the salesmen of a real estate development as they struggle to sell properties to feed their families and rank higher than their coworkers on the sales board each month, so they can get better sales leads the next month to try and hustle to earn enough to feed their families again.

If you've never listened to a live performance it might take a bit to get used to the sounds of the audience applauding, for instance, but it's worth it to hear this great script and great performers.

Where does Glengarry Glen Ross rank among all the audiobooks you’ve listened to so far?

High, I am a fan of the three leads and it was great to hear them all together in this.

For what this is, it isn't bad. I've mentally compared this to the film with the all-star cast. These actors are top notch, but the film cast was top top shelf.

I'd be better off just grabbing the full film audio track and listening to that.

Would you listen to Glengarry Glen Ross again? Why?

Yes. I feel like there's more to be gained through a second listen. It's short, so it's not a major task.

The hardest thing in life is sell

Stock Brokers steal money, but it's not your fault, it's theirs

A Story For Everyone Who Works For A Living.

Good, but leaves you hanging

First up, the performance was excellent. I wish I could have seen the stage production after listening.

As for the story, that suffers from the time constraints that a play imposes. It seems like the book is just getting going when it ends. The subject matter itself is a little on the week side. It highlights the cut-throat atmosphere of high pressure salesmen, but this is a segment of society whom with anyone would have a hard time empathizing.

A short listen, I recommend you give this version a try even just to experience the full cast performance.

I’ve seen the film many times and can’t shake the voices of Jack Lemmon and Al Pacino. The actors in this version do a good job and they are famous actors but I feel Lemmon and Pacino are crisper and have a tremendous presence.
The story is average. It’s the banter between the characters that makes this piece along with the staccato dialog.

. Brilliant! Almost as good as the film.

Brilliant! Though missing the Alec Baldwin film scene, I felt similar to how I did watching the brilliant movie. Bravo!!!

It's a shame because I love the story and was hoping for a different perspective. I guess you just can't compare it to to the movie with grade A actors because they can suck you into the story. These guys however can't. I was very aware that I was listening to a script.

For some reason this version is missing the character that was played by Alec Baldwin, Blake. There's no always be closing speech, no explanation of the sales contest and cadillac prize. That scene was a classic, the best scene in the movie, and without that context this audiobook falls flat. Don't get me wrong though, the performances by Mantagena and Dreyfuss were stellar.