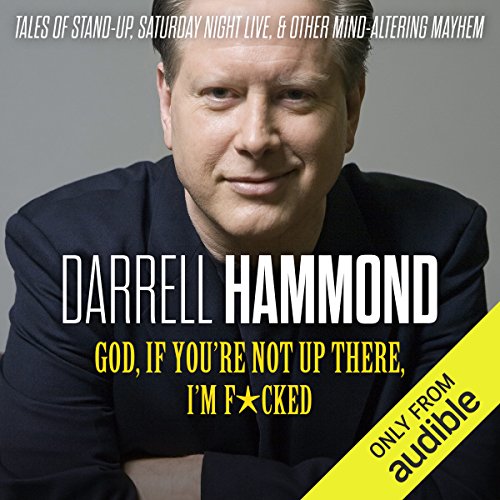 Tina Fey’s Bossypants meets David Carr’s The Night of the Gun in Darrell Hammond's groundbreaking memoir, God, If You’re Not up There, I’m F*cked - a raw look inside the troubled life and mind of an American comic genius.

By turns poignant and hilarious, Hammond takes listeners from the set of Saturday Night Live, where he was the show’s longest tenured cast member, to the drug-ridden streets of Harlem and into the twisting corridors of his own unflaggingly humorous consciousness. Mingling behind-the-scenes stories from television’s best loved comedy series with a dark look inside a world-class funnyman, God, If You’re Not up There, I’m F*cked is a book sure to resonate with anyone who shares a talent for performance, a love of comedy, or a desire to know how an artist can climb from the deepest despair to the very top of his profession.

Behind the Scenes with Darrell Hammond

"I'm heralding the high watermarks of my life but the flip side is there are some pretty low watermarks, too," the SNL alum says of his confessional memoir.
0:00

What listeners say about God, If You're Not up There, I'm F*cked

I found this book to be a tough listen in many places. I thought I was going to get a lot of backstage at SNL information, and while there is a good amount of that, Darrell's life is the major component, and he has lived through a lot of things that you wouldn't wish on anyone.

The book is full of impressions and performances which are wonderful to listen to, but when you hear the rest of the reading, it's hard to believe it's the same person. Darrell sounds disinterested and more monotone; he almost mumbles his way through. Whether that's just the way he talks or he was trying to keep a distance from the traumatic events, I did find that in a few places, I had trouble figuring out what he was saying or mustering up the enthusiasm to continue my listening.

The audiobook itself is definitely worth a listen, and I also enjoyed the extra material at the end: a lengthy excerpt from a live stand-up performance and an interview with Darrell himself after he recorded the audiobook.

It is certainly not all laughs (although there are many), but I found myself drawn in to his life's story and all his struggles and the lessons he eventually learned from it all. It's raw, a bit dark, and totally engaging.

Mr. Hammond's book is amazing, and his performance incredible. I recommend this to anyone. I loved it.

this book is going to help alot of people who are carrying around past trauma. I know it has helped me. I never would have thought that the man I grew up laughing to on SNL had such a serious side. I recommend this book to everyone.

really enjoyed the book. had no preconceptions going into it. very good performance. strong story of trauma, addiction, and recovery. always like the show business / comics behind the scenes explanations

A "must listen" for Hammond fans

A few years ago, I started reading "God, If You're Not There" on my Kindle. I abandoned it after a few pages, shocked by the dissonance between my image of Darrell Hammond and the reality. (Naive, I know.) Last week, when Audible released the audiobook narrated by the author, I decided to give this book another try. I'm glad I did.

"God, If You're Not There" is about Darrell Hammond's life, both the highs and the lows. He describes his struggle with mental illness, addiction, and abuse at the hands of his parents... that's difficult to listen to (and must have been difficult to narrate). But he also describes his career and includes several of his wonderful comedic impressions. He recounts his experiences from Saturday Night Live (which I absolutely loved, as an SNL fan), and notes that he refers fans to s Washington Post article in response to "Why aren't you playing Donald Trump anymore?"

The book also describes Hammond's recovery from addiction and finding peace. For me, this was the most satisfying part of the book. A very interesting audiobook by and about this talented comedian. Highly recommended!

This is the ideal book for Audible.

This book is horrifying, funny, captivating, hypnotic, and stunning. If you thought you knew Hammond from SNL, you know nothing. Darrell had a terrifying and devastating life of abuse, addiction, and survival. It's worth listening to for Hammond's stories, voices, memories, and hopefully, some uplifting hope that can arise out of horror. Don't miss this book!

I began listening to this audiobook expecting a mildly entertaining, funny, and light-hearted story. Oh my. It was not that at all. There were parts of the book that were funny, and there were parts that were light entertainment. But the main story is how Darrell Hammond was horribly abused by his mother, and how that abuse has affected him in negative ways all throughout his life. It's a story with a punch. I cannot begin to imagine the internal pain that Hammond lives with every day.

If you're interested in Darrell Hammond at all I recommend this book. Just know that this book is a real memoir of Hammond's painful life, and it can be heavy and depressing at times.

I heard a snippet of an interview with Darrell Hammond on the Bob and Tom show where he mentioned his book. I’ve always been a fan so I decided to download and listen. I was blown away at his story and what he has been through. I have struggled with anxiety and depression in my life and listening to his story hit me on a very personal level.

I laughed, I cried, I healed.

I am not being facetious when I say that I laughed so hard I paid I cried so hard I choked and I healed so hard I slept well afterwards. I also have some unfortunate things in common with the author and I am terrifically grateful that I've been in therapy and have been able to avoid alcoholism. somehow I managed to avoid being a cutter. This insight into what celebrities life was very interesting. and hearing about the people that Darrell Hammond met like vice president Gore and of course President Clinton was hilarious and also very touching. Darrell Hammond, I wish you all the best. I saw you at Mohegan Sun when the Thunder was clapping back at you. if there is a God, he's on your side now.

This is a fantastic book. I’d recommend it over the actual book because Darrell Hammond is so damn good at voices. He does something amazing to imbue the mood of any situation into his voice, and then adds the characters flawlessly.

But that’s just the surface. The story of his life, in the context of living with severe mental illness and struggling to find peace, is something that needs to be shared. This book had a permanent impact on my life and how I see others.

Out of tragedy comes triumph!

What everyone knows about Darrell Hammond... he’s a comedic giant. He is so very funny and his impressions are always spot on. I’m so glad he shares a few in this book as I miss seeing him regularly on SNL. What I think most don’t know about, including myself, is his tragic and abusive childhood. He opens his life and his heart in this book and proves there is never a clear path to overcoming obstacles. But with life experiences, time, rehab, introspection, and good therapy, each puzzle piece of his life forms a beautiful masterpiece.

Darrell
Thank you for this book. I listened to it at work and had to really use restraint not to laugh out loud. It made my work day go so much better. Thank you for sharing your journey.

IMPORTANT READ, SAD AND MOVING, MY HEART GOES OUT TO HIM. I'M FROM FLORIDA TOO