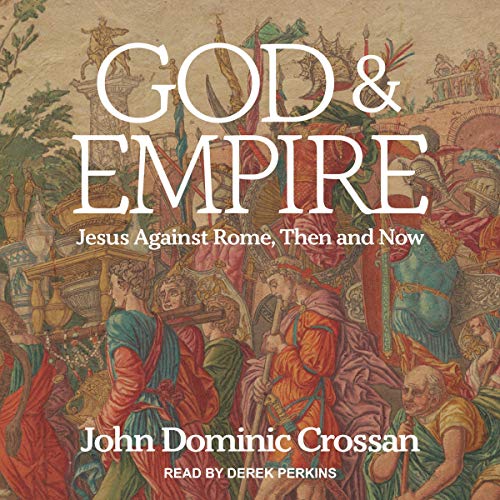 In contrast to the oppressive Roman military occupation of the first century, Crossan examines the meaning of the non-violent Kingdom of God prophesized by Jesus and the equality advocated by Paul to the early Christian churches. Crossan contrasts these messages of peace with the misinterpreted apocalyptic vision from the Book of Revelation, which has been misrepresented by modern right-wing theologians and televangelists to justify US military actions in the Middle East.

In God and Empire Crossan surveys the Bible from Genesis to Apocalypse, or the Book of Revelation, and discovers a hopeful message that cannot be ignored in these turbulent times. The first-century Pax Romana, Crossan points out, was in fact a "peace" won through violent military action. Jesus preached a different kind of peace - a peace that surpasses all understanding - and a kingdom not of Caesar but of God.

The Romans executed Jesus because he preached this Kingdom of God, a kingdom based on peace and justice, over the empire of Rome, which ruled by violence and force. For Jesus and Paul, Crossan explains, peace cannot be won the Roman way, through military victory, but only through justice and fair and equal treatment of all people.

What listeners say about God and Empire

Powerful and thought provoking. How we survive the collapse of our American Empire is up to us. Perhaps this book is more appropriate today than when written in 2007.