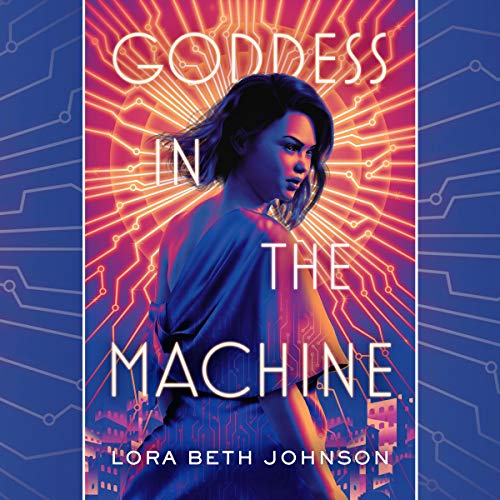 Goddess in the Machine

Andra wakes up from a cryogenic sleep 1,000 years later than she was supposed to, forcing her to team up with an exiled prince to navigate an unfamiliar planet in this smart, thrilling sci-fi adventure, perfect for fans of Renegades and Aurora Rising.

When Andra wakes up, she's drowning.

Not only that, but she's in a hot, dirty cave, it's the year 3102, and everyone keeps calling her Goddess. When Andra went into a cryonic sleep for a trip across the galaxy, she expected to wake up in 100 years, not 1,000. Worst of all, the rest of the colonists - including her family and friends - are dead. They died centuries ago, and for some reason, their descendants think Andra's a deity. She knows she's nothing special, but she'll play along if it means she can figure out why she was left in stasis and how to get back to Earth.

Zhade, the exiled bastard prince of Eerensed, has other plans. Four years ago, the sleeping Goddess' glass coffin disappeared from the palace, and Zhade devoted himself to finding it. Now, he's hoping the Goddess will be the key to taking his rightful place on the throne - if he can get her to play her part, that is. Because if his people realize she doesn't actually have the power to save their dying planet, they'll kill her.

With a vicious monarch on the throne and a city tearing apart at the seams, Zhade and Andra might never be able to unlock the mystery of her fate, let alone find a way to unseat the king, especially since Zhade hasn't exactly been forthcoming with Andra. And 1,000 years from home, is there any way of knowing that Earth is better than the planet she's woken to?

"Johnson’s rich, intelligent world blends sci-fi elements with palace intrigue and swoon-worthy characters in a way that is wholly unique and utterly brilliant. This book will make you laugh, make you fall in love, and then it'll blow your mind." (Emily Suvada, award-winning author of the Mortal Coil series)

What listeners say about Goddess in the Machine

With humor, action, drama and even a little romance, this story will have you on the edge of your seat as it makes every twist and turn.

I thoroughly enjoyed this book. The characters are all extremely well-written - even the detestable ones have things that cause the reader to feel for them at least somewhat. Overall, a very unique sci-fi that also shows most likely where the English language is headed in the future.

Road to El Dorado but in Space

Okay, so this is pretty much a more in detail Road to El Dorado but in space with plot twists and no songs. And I love it. The only reason this gets four stars for me is because I have to wait a year for the sequel. A year. ....But I already pre-ordered the sequel so the wait is on. The ending isn’t a cliff hanger but it also is. Everything is fairly wrapped up but in a somewhat satisfying way that still leaves you craving what happens next. Going in, I didn’t know there was a sequel and lost my ever-loving mind. Be ready for that, but know it’s so worth it.

The "language" is annoying

I struggled to finish this. I was excited to listen to this story but I found it boring. Their language annoyed me.