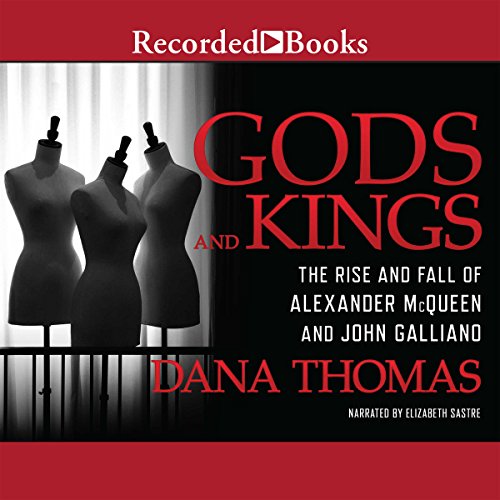 Written by: Dana Thomas
Narrated by: Elizabeth Sastre
Try for $0.00

In February 2011 John Galliano, the lauded head of Christian Dior, imploded with a drunken, anti-Semitic public tirade. Exactly a year earlier, celebrated designer Alexander McQueen took his own life three weeks before his women's wear show. Both were casualties of the war between art and commerce that has raged within fashion for the last two decades.

In the mid-1990s, Galliano and McQueen arrived on the fashion scene when the business was in an artistic and economic rut. They shook the establishment out of its bourgeois, minimalist stupor with daring, sexy designs and theatrical fashion shows. They had similar backgrounds: sensitive, shy gay men raised in tough London neighborhoods, their love of fashion nurtured by their doting mothers. By 1997 both had landed jobs as creative directors for couture houses owned by French tycoon Bernard Arnault, chairman of LVMH.

Galliano's and McQueen's work not only influenced fashion; their distinct styles were reflected across the media landscape. With their help luxury fashion evolved from a clutch of small, family-owned businesses into a $280 billion-a-year global corporate industry. Executives pushed the designers to meet increasingly rapid deadlines. For both Galliano and McQueen, the pace was unsustainable.

The same week that Galliano was fired, Forbes named Arnault the fourth richest man in the world. Two months later, in the wake of McQueen's death, Kate Middleton wore a McQueen wedding gown, instantly making the house the world's most famous fashion brand, and the Metropolitan Museum of Art opened a wildly successful McQueen retrospective, cosponsored by the corporate owners of the McQueen brand. The corporations had won, and the artists had lost.

In her groundbreaking work Gods and Kings, acclaimed journalist Dana Thomas tells the true story of McQueen and Galliano. In so doing she reveals the relentless world of couture.

What listeners say about Gods and Kings

Biographies but make it FASHUN!!!

The book that got be obsessed about Alexander McQueen and such an intimate storytelling of two of Fashion's Greats, vivid details, elaborately written, well paced and engaging. I personally love listening to this while shopping at a Holt Renfrew and touching an Alexander McQueen piece. Highly recommend!!!!

I loved the narration, overall was very interesting especially about McQueen. Thoroughly enjoyed it!

This book provided so much insight into the stressful and shallow yet fantastical realm of contemporary fashion. I was compelled to binge-listen. Any fans of fashion or art history would enjoy this without question.

Loved it from beginning to end!

Dana did a Great job giving great detail and passion. So clever to choose these two men for this Book.

Well written history with deft contrast and comparison of two fashion legends. An engaging story which left me inspired by the designers brilliant creativity amidst the fashion world’s rapidly shifting focus from fashion as art and culture to fashion is business and commercial. The sadness of McQueen’s inner pain and untimely demise mirrors the author’s sorrow at the sheer capitalization of fashion, perhaps at the expense of creating innovative, wearable art.

The book is nothing short of amazing. The performance is inconsistent. The narrator insists on pronouncing the French names and words with a French accent and the Italian ones with an Italian one when she clearly doesn't speak either, because she mispronounces the name Schiaparelli in the beginning but gets it right in the end; doesn't pronounce the word décolleté right etc. There are too many of those to mention and it is incredibly annoying because it is clearly pretentious. It reminds me of an old SNL skit where reporters ennounciate every Spanish word with an original pronunciation.

Excellent history and insight into the lives of two of the most extraordinary talents in fashion. The narrator does a brilliant job. Worth every minute.

Loved everything about this book .

Well written, extremely well read I couldn’t it the book down.
I plan to read it a second time.
Highly recommend!

An extraordinary story about art, commerce, talent and the shadow. Very much enjoyed the narration as well.

I read this right after 'the beautiful fall' and it was so appropriate! I'm glad I went audio because her pronunciation of French and Italian phrases was beautiful!

i really enjoyed this book.

very interesting to listen to the contrasting upbringings of each designer and their evolving collections. great read, even greater listen. although, by the end of it, you will want to describe every detail of your day in a british accent.

This book goes into great detail on two talented designers. The author gives insight into their lives and how they fell from grace