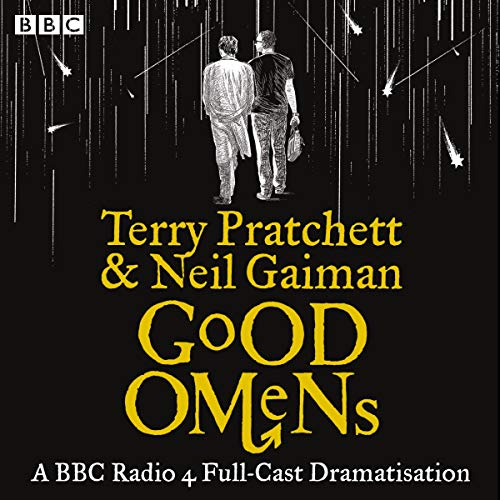 According to the Nice and Accurate Prophecies of Agnes Nutter, Witch, the world will end on a Saturday. Next Saturday in fact. Just after Any Answers on Radio 4….

Events have been set in motion to bring about the End of Days. The armies of Good and Evil are gathering and making their way towards the sleepy English village of Lower Tadfield. The Four Horsepersons of the Apocalypse - War, Famine, Pollution and Death - are assembling. Witchfinder Shadwell and his assistant Newton Pulsifier are also en route to Tadfield to investigate unusual phenomena in the area, while Anathema Device, descendent of prophetess Agnes Nutter, tries to decipher her ancestor’s cryptic predictions.

Atlantis is rising; fish are falling from the sky; everything seems to be going to the Divine Plan. Everything, that is, but for an unlikely angel and demon duo, who have been living on Earth for several millennia and have become rather fond of the place. If they are to prevent Armageddon they’ve got to find and kill the one who will bring it about: the Antichrist himself. There’s just one small problem: someone seems to have mislaid him…

Adapted, sound designed and co-directed by Dirk Maggs (Neverwhere, The Hitchhiker’s Guide to the Galaxy) this first ever dramatisation of Terry Pratchett and Neil Gaiman’s novel features a large cast including Peter Serafinowicz, Mark Heap, Josie Lawrence and Paterson Joseph.

What listeners say about Good Omens

Premise is great as are the actors. Simplistic plot and inappropriate jokes about gays really turned me iff!

Amazing performances by all involved

A great story and each of the performers captures the characters perfectly. It was a great listen and a fun adventure

A Fine, Full Dramatization of a Timeless Classic

BBC Radio does it yet again. One of history’s ‘most borrowed and seldom returned’ books is brought to life by a stunningly talented, all-star cast in a way that’s bound to delight and amaze. Pitch perfect and beautiful, well worth the investment for those who are familiar with the existing book, and to those who are new to it. Enjoy!

A very captivating story filled with great humor. The acting is fantastic. An instant classic.

Terry Pratchett and Neal Gaiman created a wonderful story with a fun twist.
The audio performance brought it to life.

How could it not be good?

I did not want to stop once I got in. Simply amazing. the casting was delightful, the voices are spot on. very, very engaging.

Fabulous audio version of the darkly comic wonder that is the classic book Good Omens. Especially loved the final chapter.... I will listen again and again for the sheer joy of it!

I decided to read this (even after seeing the television show several times) and it did not disappoint. The cast was simply amazing and the bloopers at the end made my day! The sound effects really immerse you into the story, and the story itself was unique all on its own. I found several hidden gems of information that you would never see in the show and the two stand on their own brilliantly in their own right. This book is definitely worth a read! My only complaint is that it's not longer.

An adaption of one of my all time favorite books

This is a tricky thing to review. I love the story & have read it many many times & I know the details inside out & back to front.

The cast are stellar & the performances are excellent but as a fan of the original I found the adaption quite irksome in places.

In the original, the book has a voice of it's own (almost) with foot notes and asides. these are dropped entirely from the adaption with some of the text clumsily shoe-horned in to characters dialogue or as additional exposition. This for some reason grated with me, every time.

Personally, I felt that an adaption might have worked better with a 'narrator' for the book, or at least for the footnotes but perhaps they feared it would make it more like Hitchhiker's Guide.

Either way it's an excellent audiobook worthy of your time, but fans of the original may find some of the changes a little jarring. New listeners will enjoy every second of it.

Listen to the audiobook, not the adaptation

This adaptation loses a lot of the wit and charm of the book. Many of the clever lines of narrative and action sequences are described aloud by the characters, lending an air of contrivance and breaking my suspension of disbelief over its knee.
While the cast themselves did nothing wrong, this is a piece of fiction that sounds more like an underfunded radio hour than a 'nice and accurate narrative of events leading to the apocalypse'.
As a fan of the book and Dirk Maggs (whose adaptations of 'Neverwhere' and the Hitchiker's Guide to the Galaxy I quite enjoyed), I am disappointed with the quality of this adaptation. Don't waste your money on this, and listen to the audiobook instead if you want a audio narration of 'Good Omens'

I love the book and this is not a replacement for the real thing but it is a brilliantly done radio adaptation and the cast does a wonderful job.

One of my favorite books, brought to life...

A few months ago I downloaded the copy of Neverwhere done in radio dramatization by the BBC and was sadly very dissapointed in its performance. A much loved story, I was easily lost with what was happening even though I have tead it many times. This production on the other hand, was fantastic. Well adapted to the radio audience and wonderfully performed. I would love to hear some of Pratchett's plays or short stories done like this was. Excellent purchase. Wish there was a sequel, or wven if the movie finally took off!

Buy the audiobook, not this!

I bought this title because I thought it was the audiobook.
I've read the book in Hebrew and absolutely loved it, so I wanted to try it in the language of origin.
By mistake I bought the dramatization. While It's a nice effort, they took out all of the descriptions so you have no idea what the hell it going on. I had to rely on memory to understand the best scenes. In addition, each and every chapter starts and ends with opening titles, so if you binge it, you will hear all credits again, and again, and again and again.
Do yourself a favor and buy the audiobook (or go watch the TV series, it's also brilliant).
This dramatization will only ruin the story for you.

Totally sensational!!! I could not stop smiling all the way through. A great performance of one of my favourite books.

Wonderful cast reading voices are perfectly cast!!! If you have already read good omen you will still love it!!!
If this is your first time hearing it you will be easy for you to pick up the story line!!

I adore Mark Heap and company. It's a fun listen. I'd recommend the book first as it has the hilarious prose of Pratchett and Gaiman, but this adaptation is solid. If you've read the book you'll enjoy it.

A real audio play rather than a reading

And that puts it in a whole different place. It was fantastic.
I recommend this highly and hope you like it as well.