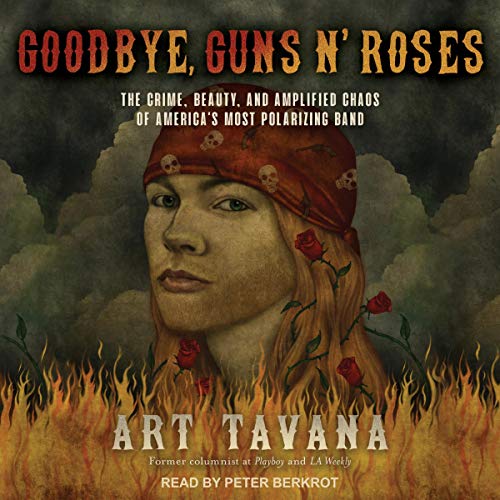 Written by: Art Tavana
Narrated by: Peter Berkrot
Try for $0.00

A valentine and a breakup letter to one of rock's most controversial bands.

Goodbye, Guns N' Roses is a genre-rattling attempt to explain the appeal of America's most divisive rock band. While it includes uncharted history and the self-lacerating connoisseurship of a Guns N' Roses fetishist, it is not a recycled chronicle - this book is a deconstruction of myth, one that blends high and low art sketches to examine how Guns N' Roses impacted popular culture. Unlike those who have penned other treatments of what might be considered a cliched subject, Art Tavana is not writing as a GNR patriot or former employee. His book aims to provide an untethered exploration that machetes through the jungle of propaganda camouflaging GNR's explosive appeal.

After circling the band's three-decade plundering of American culture, Goodbye, Guns N' Roses uncovers a postmodern portrait that persuades its viewer to think differently about their symbolic importance. This is not a rock bio, but a biography of taste that treats a former "hair metal" band like a decomposing masterpiece. This is the first Guns N' Roses book written for everyone; from the Sunset Strip to a hyper-digital generation's connection to "Woke Axl", it is a pop investigation that dodges no bullets.