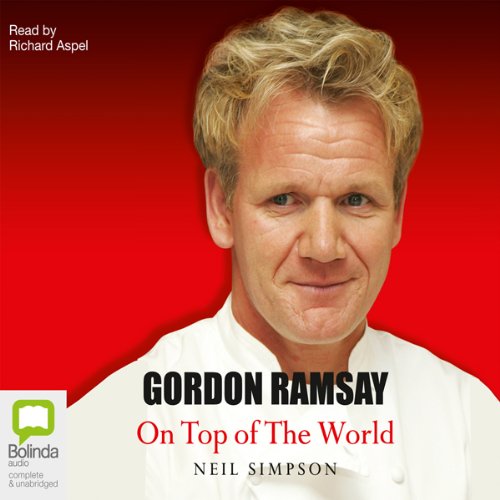 Written by: Neil Simpson
Narrated by: Richard Aspel
Try for $0.00

Best known as the host of Fox's Hell's Kitchen and Kitchen Nightmares, Gordon Ramsay is one of the most driven, successful, and irate chefs around. He has thrown Hollywood actresses out of his restaurants and is notorious for his anger, but his food has been served to numerous heads of state, and he is one of only three chefs in England whose restaurant is rated at three Michelin stars.

In this illuminating work, Ramsay discusses the violent, alcoholic, absent father who died just days after the pair had been reconciled as adults; the best friend and protégé whose bizarre suicide came hours after the two had shared a final meal; the decade-long battle to save his younger brother from heroin addiction and crime; and the real reason why he has not attended the births of any of his four children.

Sometimes hilarious and frequently heartbreaking, this is Gordon Ramsay’s full life, from tenements and poverty to top-notch restaurants and fame.

What listeners say about Gordon Ramsay

I got this hoping it was not too similar to Ramsay's "Humble Pie" I was not disappointed. They share some facts but you will not feel as if you are on "repeat" I was pleased with the narrator as well.

A Hilarious look into Ramsay’s life and career

I’ve always enjoyed watching Gordon Ramsay on TV. Yes he is a foul-mouthed politically incorrect man, but I admire his ability as one of the world’s top chefs and never get tired of his antics. This book tells the story of how he came from a struggling family plagued by his abusive alcoholic father and drug-addicted brother to his place as one of the greatest chefs of his generation.

The book is actually quite hilarious. It is riddled with Ramsay’s F-bombs and unique insults as he tells of his escapades in climbing to the top of the catering world. It also has its sad points as well. If most people understood the life Ramsay had as a child, perhaps they would understand why he is so hot-tempered and driven. They may not like him, but they might understand him better. Not to say that this gives Ramsay a free pass. He has done questionable things through his life and career, but he makes no excuses.

Aspel’s narration is very good and he reads with the vigor required for the biography of such a volatile expletive-uttering man. This is a must for any Ramsay fan. Give it a go. You’ll get a laugh at the least.

Like Ramsay? Read this Book. As simple as that.

It is an extremely compelling, entertaining and inspiring story. It will show how many years of hard work go into "turning into a overnight sensation." It will, however, make you want to swear a lot more (and possibly adopt a British accent).

What other book might you compare Gordon Ramsay to and why?

Goes well together with Bastianich's "Restaurant Man." Get a chef's POV from one end, get the wine-guru/businessman flair on the other.

Which character – as performed by Richard Aspel – was your favorite?

Gordon (Obviously). He is pretty much the only one.

Gordon has had to cope with many failures and difficult moments. I was honestly moved by how he appears to have taken each one on, as painful as it must have been to go through each one of them.

I coughed juice from my nose when Gordon refers to how much "Yanks" use their lawyers as their moms... "They go crying to them".Also, reader discretion is advised. Apart from a lot of F bombs (and some more "Harry Potterish" insults in use in the UK) Ramsay constantly wants to use kitchenware and food to deliver impromptu "sideways" colonoscopies to people who anger him in the kitchen.

Great book it's a little longer than needed. it's a good listen for most of the book

The saying holds true in this story of Gordon Ramsey.

"Public persona" does not truly define the "real" person. An interesting story of "the man" vs "the myth".

Good story, though it took a bit for me to adjust the the speakers accent.

The book was very long but would've been better had the narrator not paused so long between paragraphs. It was annoying.

I know Americans and British are worlds apart, but the way this is narrated I can’t take it seriously. This Aspel geek sounds like the mad professor on the Simpsons cartoon. It sounds even more ridiculous when he has to cuss, which if we all know Gordon Ramsay mannerisms, is quite often. I like the book because it’s more in depth and somewhat more objective than Humble Pie, not to mention more recently written, but I just can’t get over this narrator.

A couple of question decisions on the authors part but over all a fantastic book.

The audio in the beginning was a bit rough but cleared up about a quarter of the way through. It was odd when the author would compare Gordon to top tier chefs but then also say he made his “Oliver move” implying that somehow Jamie oliver had surpassed him. Ending the book with an unconfirmed or concluded scandal seemed a bit tasteless and offhandedly insulting too Gordon but that’s just from my perspective and find 98% of Gordon firebrand rants to be providing a lot of valid points which is more telling about my tolerance for perceived insults and wrong doings than anything. Over all a fantastic telling and will definitely be a repeat listen for me.

This read very much like a collection of celebrity gossip columns. Not a style that I found appealing.