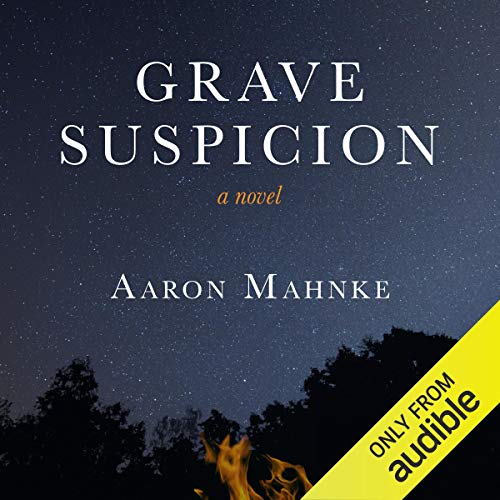 Written by: Aaron Mahnke
Narrated by: Terence West
Try for $0.00

Sam Hawthorne has lived a nomadic life, wandering through small Midwestern towns for the past two decades. He is known among the people he meets as an oddity and a troublemaker. He has a secret, however; one that has given him the chance to help dozens of people over the years. But that secret has also created a trail, and now someone with violent intentions has begun to follow it.

Forced to run for his life, Sam returns to his hometown for the first time since the death of his family. There, Roger Sandbrook - old family friend and local history professor - welcomes him in and gives him aid. Sam quickly learns that he isn't the only one with secrets, however, and that Roger just might be the only person who can help him.

From the tired small towns of the Midwest to the streets of historic Salem, Sam's journey will carry him through painful memories and across centuries of forgotten history. But ask the questions stack up, will he also find the answers he needs?

What listeners say about Grave Suspicion

love the Lore Podcast, not a fan of this book

Aaron Mahnke's Lore Podcast - while in contemporary times - may be a little shy on nuance and atmosphere, usually reflects a beautiful build of atmosphere, rich historical allegory and folklore and striking accounts.

I thought his fiction would hold a similar level of depth, but I found Grave Suspicion to lack in all aspects. The characters felt like hollow cliches, the antagonists barely had a reason to exist, and the thread of holding them together felt as sturdy as spiderweb.

I can understand the appeal of an easy read that requires no thinking, but I really expected so much more. I also found it disappointing that Mr. Mahnke did not narrate his own book; I think his delivery may have elevated his work enough to earn an average grade.

(p.s. sorry Aaron, love your podcast and voice and am convinced you're a lovely person, but I was expecting Stephen King, and got drunk & sloppy Dean Koontz.)

Reads like a better than usual Wattpad story. It's sort of ok, the writing isn't too bad, but it's extremely thin. Wiiiiitches... Yeah, no. It started out moderately promising, but ended up a disappointment.

Aaron Mahnke's Lore podcast is brilliant. Thoughtful, fascinating, and truly robust in it's content. This was quite the opposite. Written almost like a film script, the style was too simplified with only the occasional literary description to brighten up and otherwise tedious plot. But worse than that was the narration. West seems to be rushing through every word, and the characters' vocal expression often seemed inappropriate or inconsistent. I'm hoping this was not his best work. Was so looking forward to several hours of the great storytelling I enjoy in Mahnke's podcast, but alas, couldn't wait for this tale to end. Better luck next time.

A fun, if unpolished, read.

Despite a charming and refreshingly emotional main character in Sam Hawthorne, this story suffers from dialogue that's not always natural or convincing, and noticeably repetitive word choice. I was drawn in by the mystery, but the resolution was incomplete, with a sequel hook that felt more frustrating than promising. Also, frankly, there was a disturbing lack of women in the story, and one of the two prominent women was characterized as a blabbermouth and caused trouble for Sam.

This sounds like I'm ragging on the book more than I actually intended. I did enjoy it! But the things I liked are a bit harder to pinpoint than the problems I had. Looking back, the whole story just seemed like it needed some more thorough editing and maybe some rewrites. I did absolutely love the metaphysical fun that happened, and I was intrigued by Roger's history and biology 'lessons'.

As for the actual performance, I was entirely thrown off by Terence West's reading. His cadences were bizarre, with dramatic pauses in inappropriate moments and emphasis placed on confusing words. Near the beginning, there were even a few moments where it was really obvious that they cut in the middle of a sentence, as if Mr West did two different reads and they needed to splice them together. It took me forever to get used to, and even then I was occasionally taken out of the experience by unusual moments, like how he frequently failed to give proper pause between description and dialogue. He did a good job with Sam's more emotional moments, but for the bad guys? His 'growly', menacing voice was embarrassing to hear, and not at all evocative of the intended feelings.

Aaron Mahnke proves he is the king of story telling

Absolutely loved the story. Can't wait for the sequel! If you enjoy stories that refer to American history (especially the Salem witch trials), you'll enjoy this story.

Too many cliches; story line didn’t make sense; for example Sam the main character was on the run for 20 years being followed by sinister individuals who didn’t want to kill him but they killed off a character in the book just to warn him. Also he was being found all the time but his Father’s best friend couldn’t find him in all that time. Just didn’t make sense.

I like Aaron Mahnke's Lore podcast so I thought I would give his book a try. It was not bad, and I can see he is setting up for a series, but to be honest I was expecting a horror novel, this is more action adventure with a man witch.

I like Lore, Mahnke's podcast, so I thought I'd try this. I shouldn't have. I have no idea how it got published. It's not terrible, but it comes off as extremely amateurish and not very well thought-out. The story is very thin and the writing borders on genuinely bad. I think I would have been less unimpressed had I read it, but listening to it emphasized all of its shortcomings, especially since the narrator was just as amateurish in his delivery, pausing in strange places, using a lot of vocal scoops like a hokey radio DJ and delivering everything with the same emphasis. The only positive thing I can say of that I'm glad I got this as a BOGO instead of paying full price.

A sorry, terrible abortion of a poor man's Carrie and a disregarded Dan Brown novel

God... Do not buy this book. The characters are as terrible as the writing is. I cannot believe this made it to print and the other reviewers have a ounce of positivity to share. I am a long time listener of his podcast Lore and expected the effort and imagination that it inspires. However, this book feels as if it was created on a cocktail napkin on weekends. The famous writers the author admires are seen in the weakness way imaginable. This is a abortion of a poor man's Carrie and a disregarded Dan Brown novel. I want my money back twice!

Life’s too short for bad books

Sorry, friends. Two hours left on this one, and I just couldn’t get through it. Given the amazing quality of the Lore podcast, I really expected something unique here. Sadly, the author may have a gift for research, but no gift for dialogue, characterization, or plot. Characters become friends, not through any sort of meaningful interaction or dialogue, but just because the author tells us they did. As it is, exposition makes up 90% of the dialogue. And unless the story changes drastically in the last two hours, there are zero female characters. Well, except for one waitress in an early scene. And if you’re wondering if the author felt compelled to describe her breasts, in a scene that otherwise consisted of ordering some coffee and pie, let me assure you that he did. (They’re ample!)

Add to that a narrator that has a fine radio voice, but otherwise an energy similar to a junior high teacher who really wants to get the kids excited about math, and you’ve got a total thumbs down from me.

The story is gripping, I liked the historical tones and the ending leaves room for a series... Love this guys work... Love his pod casts... If you like suspense and 'scary' content... Get it. ⭐️

Lore Podcast brought me here. as a long time Lore listener I was intrigued. This is not the type of book I would normally read but after 2 chapters I was hooked. My only complaint is that I wish it would have been read by the author.