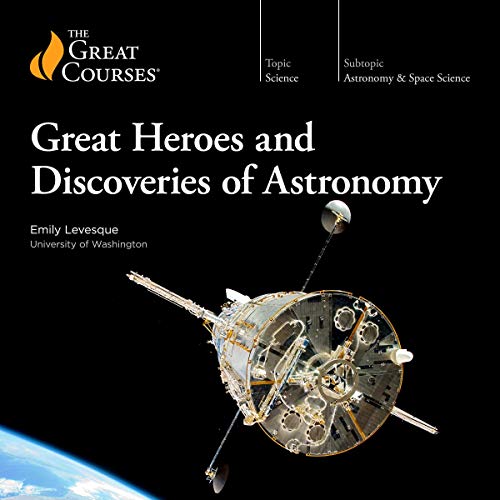 Great Heroes and Discoveries of Astronomy

When it comes to the heroes of astronomy, we tend to think of lone men persevering in the face of daunting odds. Think of the titans of astronomy and you’re likely to think of names like Edwin Hubble, Albert Einstein, and Carl Sagan. And while these individuals revolutionized our understanding of the visible and invisible universe, they, too, were standing on the shoulders of other scientists and engineers without whom none of their groundbreaking ideas would have been possible.

Great Heroes and Discoveries of Astronomy takes you around the world and across time in search of the unsung heroes who, in many ways, are just as important to the story of astronomy as Hubble, Einstein, and Sagan. Whether they stood on the shoulders of giants or themselves offered shoulders for giants to stand on, the heroes of astronomy you’ll meet in these 24 lessons are a collective of the brightest and most daring minds in science.

Other influential astronomers you’ll meet include Annie Jump Cannon, who revolutionized the way astronomers classified the stars; Grote Reber, who designed what we recognize today as radio telescopes; Vera Rubin, who identified the first observational evidence of dark matter; and so many others. From groundbreaking new theories to serendipitous observations, from engineering the world’s largest telescopes to designing bold new ways to detect gravitational waves, you’ll witness the evolution of astronomical knowledge in small steps and incredible leaps.

This is an incomparable window into why we’ve always found the stars so fascinating. And why we always will.

What listeners say about Great Heroes and Discoveries of Astronomy

Excellent in every way

I'm really picky with audio books. For me, either the content is not good or the narrator is not good or both. I heavily rely on the comments to help me decide on a title. Even then I return a lot of titles.

This title is new and didn't have a review when I bought it but I'm interested in Astronomy so I thought I'd give it a try; and I'm glad it did!

The content is very interesting; kind of a combination of Astronomy and the history of Astronomy. I found every section to be interesting and I learned a lot.

The narration is excellent too. She loves the topics and it is reflected in her voice. Additionally her voice is pleasant and it's easy to visualize her analogies and stories. I can imagine her in person classes are phenomenal.

This is a new Great Course title but I can imagine that it will eventually on of the top titles in their library. I highly recommend.

Love the subject, dislike the reader

The subject of the book is great, I learned a lot. HOWEVER, the reader got on my nerves. I would have listened to the book all in one go except I was distracted by the readers style and had to shut it off. It sounds like the whole text is written IN CAPITOL LETTERS!! So earnest, so powerful, so important and so annoying.

By chapter 21 the author works in Syrian refugees and global climate change...
I wish they would stick to the subject matter and stop beating us over the head with their political ideology.

Not actually about astronomy. About politics disguised as a course on astronomy. Disappointing. Title should be more appropriate.