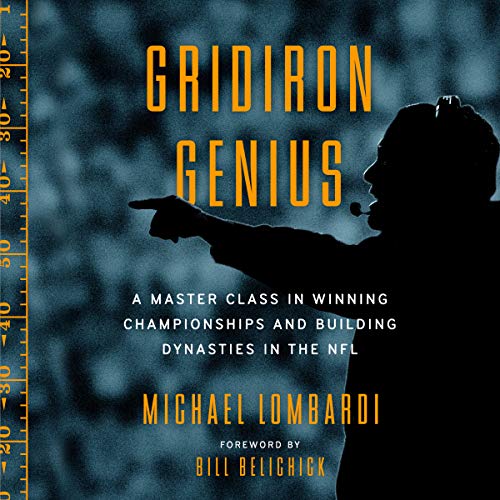 Former NFL general manager and three-time Super Bowl-winner Michael Lombardi reveals what makes football organizations tick at the championship level. From personnel to practice to game-day decisions that win titles, Lombardi shares what he learned working with coaching legends Bill Walsh of the 49ers, Al Davis of the Raiders, and Bill Belichick of the Patriots, among others, during his three decades in football.

Why do some NFL franchises dominate year after year while others can never crack the code of success? For 30 years, Michael Lombardi had a front-row seat and full access as three titans - Bill Walsh, Al Davis, and Bill Belichick - reinvented the game, turning it into a national obsession while piling up Super Bowl trophies. Now, in Gridiron Genius, Lombardi provides the blueprint that makes a successful organization click and win - and the mistakes unsuccessful organizations make that keep them on the losing side time and again.

In reality, very few coaches understand the philosophies, attention to detail, and massive commitment that defined NFL juggernauts like the 49ers and the Patriots. The best organizations are not just employing players, they are building something bigger. Gridiron Genius will explain how the best leaders evaluate, acquire, and utilize personnel in ways other professional minds, football and otherwise, won't even contemplate. How do you know when to trade a player? How do you create a positive atmosphere when everyone is out to maximize his own paycheck? And why is the tight end like the knight on a chessboard?

To some, game-planning consists only of designing an attack for the next opponent. But Lombardi explains how the smartest leaders script everything: from an afternoon's special-teams practice to a season's playoff run to a decade-long organizational blueprint. Listeners will delight in the Lombardi tour of an NFL weekend, including what really goes on during the game on and off the field and inside the headset. First stop: Belichick's Saturday-night staff meeting, where he announces how the game will go the next day. Spoiler alert: He always nails it.

Football dynasties are built through massive attention to detail and unwavering commitment. From how to build a team, to how to watch a game, to understanding the essential qualities of great leaders, Gridiron Genius gives football fans the knowledge to be the smartest person in the room every Sunday.

"Gridiron Genius is a FASCINATING read! Michael Lombardi provides a truly unique look at the inside workings and the exacting attention to detail that is paramount to succeed at the highest level. Michael has worked in concert and in lock step with some of the best teachers and administrators in the history of professional football. He shares true behind-the-scenes glimpses and anecdotes of the behind the scenes world of our industry." (Sean Payton, head coach, New Orleans Saints)

"Michael Lombardi got his masters in football from The Masters of football - Bill Walsh, Al Davis, Bill Belichick. Now he passes those memorable lessons on to his fortunate readers so they can receive an advanced education in coaching, personnel, management and strategy." (Adam Schefter, ESPN NFL insider and author of The Man I Never Met)

"My only criticism of Michael Lombardi's book is that I enjoyed it too much. The characters and stories were irresistible. But make no mistake, this is a very serious book. Lombardi extracts a meticulous and full-fledged blueprint for organizational excellence from a raft of hard evidence. This is a guidebook for excellence - and it applies way beyond the gridiron. Any thoughtful business leader, for example, could assemble a bundle of useful, integrated ideas that could transform organizational performance. Bravo!" (Tom Peters, author of In Search of Excellence)

What listeners say about Gridiron Genius

The chapter on how Belichick and the Patriots set up a week in preparing a game was the standout. It was a nicely written and structured chapter and you learned from by seeing what they do to win a game. Step by step.

The rest of the chapters are scant opinions and idealogies from the author. He’s trying to tell you how to feel and think, instead of telling us a story and giving a macro example of things. Too much lecturing - not enough stories about the game.

The chapter missing? How and what Belechick learned from his mistakes from the Cleveland job to the Patriot job. That’s the master class info we needed. Instead, this is really just a book on how Belichick, Bill Walsh and Al Davis are the best and everyone else in football is subpar.

I haven’t been a big fan of Mike Lumbardy. I find that he talks a lot it’s very opinionated and a bit obnoxious. My opinion of him has changed significantly since having read this book. He’s a great communicator, a compelling storyteller, and a surprisingly good writer for a football guy. I found it very entertaining, and I wish that Doug Pederson had let Mike wrote his biography.

please please hire a reader for this amazing book

First let me start by saying I love listening to Mike Lombardi talk. Have been for years on the various Bill Simmons Podcast platforms. His story here is incredible and I learned a lot about both him AND the game of football that I hadn't known before.

the one major critique I would have is that his reading of the book is too uneven and choppy. I actually would rather they hire a pro to do this book than have a guy I listen to speak on a weekly basis.

having said that, the book was incredibly enjoyable and I would purchase it again even knowing about the less than ideal reading.

Great Analysis from an NFL Insider and Lifer

This is a great listen for anyone who appreciates the recent history of the NFL. There are too few great organization architects who have fielded teams that are dominant over a period of a decade or more. Author Michael Lombardi has worked for three such me: Bill Walsh, Al Davis, and Bill Belichick.

These three men appear to have little in common in their upbringing or in their personalities. And each man's focus is entirely different: Walsh the offensive innovator and engaging personality, Belichick the defensive genius who appears brash and aloof, and Davis the rebel owner never at a loss for an outlandish word or innovation. But they are united by a handful of common characteristics:

1. They understand the importance of building a culture of accountability.
2. They play a different game from their me-too contemporaries.
3. They build a system and then find players and coaches who fit that system.

Had Lombardi worked in a few other organization, the book might have included Vince Lombardi and the Packers; Bill Parcells and the Giants; Paul Brown and the Browns; and Tom Landry, Tex Schramm, and Gil Brandt of the Cowboys.

The characteristics of these winners are present not only in great football teams, but also in business. And in both football and business, these types of leaders - bold, focused, results-oriented, architectural, system-driven - are rare. But that scarcity is more evident in sports than in business because sports leaders are measured regularly and publicly.

Should you invest in and listen to this book? Take this simple test:

1. If you want to learn more about how successful pro football franchises build teams rather than merely assemble talent, listen to the book.

2. If you enjoy a journey through the recent history of the league and learning the connections among many men whom you've seen roam the sidelines in recent years, listen to the book.

3. If you want to imagine how some superbly talented athletes who never achieve superior results might have had very different career trajectories had they been placed in a different system, listen to the book.

4. If you believe that most NFL coaches and owners are equally talented and that some achieve success merely by breaking the rules or as a result of dumb luck, don't bother listening to the book.

5. If you believe that raw talent wins and sustains NFL championships, don't bother listening to the book.

How did you do on the quiz?

Every year, I choose a sports book that I've read or listened as a gift for two friends who are as fanatic about sports as I am. This year, they'll receive a hard copy of this book for Christmas.

great look into what it takes to win superbowls

excellent book by an insider who learned from many great coaching minds. listen up to learn about a coach that requires accountability

Really informative and engaging content from start to finish. The writer definitely has something to say, and if you are interested in football you will enjoy learning from this book. The author shares important insights from some of football's best personalities.

His writing is, as he might himself say of a borderline starting defensive back, "replacement-level." It is close enough to professional that the reader/listener can follow along. It's a book about football, after all, so I wasn't expecting Victor Hugo.

His reading, though, is stiff and sometimes even distracting because of the stilted delivery; and that is surprising because he is literally reading his own book. Don't let this keep you from buying or listening to the book...just be prepared to fight through the narrator in a few spots...who happens to be the author, too. If Mr Lombardi asked himself what would Belichick do, the answer might be to prepare and practice so much that he could perform intuitively and without thinking in the recording studio.

I heartily recommend this book for anyone who is a fan of professional football.

If you love football and want a deeper appreciation this is a great listen. I loved the stories from the past and how relevant they so are to todays game. The stories about the draft and all the intricate details that go into selecting a player was my favorite part. Definitely going to re-listen.

The reader performed it as if—it was just not good. The information and perspective, however, made listening worthwhile. As an aspiring head football coach, I appreciated the bounty of insight.

I’ve been a long time football fan, and this is a must-read for anyone who is passionate about the sport of football or is considering wanting to go into the profession, or just wants to learn background on what it takes to break into the sport

Very good Book. It gives insight to the mastery of two the NFL greatest coaches.

It is an exceptional listen for every football fan! I even enjoyed the Bruce Springsteen references! Well done my fellow New Jerseian!

Mike Lombardi hit this one out of the park.

One of my favorite sports books ever.

It also teaches valuable leadership lessons for the real world.

I thought I knew Football, until I read his book.