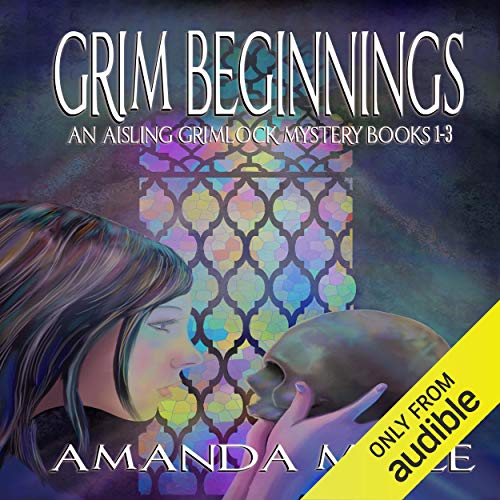 Aisling Grimlock never thought she'd join the family business. In fact, she was dead set against it. When an economic downturn causes her to lose her job, she's forced to go to desperate measures to earn a living.

Aisling comes from a big family of grim reapers - no, that's right. She's the youngest of five siblings - and the only girl - and the testosterone is going to hit the fan when the Grimlocks try to teach Aisling the ropes and keep her safe at the same time.

Between rogue wraiths, murderous new acquaintances and gargoyles dropping from the sky, Aisling has her hands full. That's on top of four brothers (and one curmudgeonly father) who would die for her - while also killing for her - and a police officer who's desperate to learn the family secret.

Follow Aisling as she delves into the mystery of her mother's death and a world she never wanted to explore - and yet might fit in all the same. This omnibus includes the first three books in the Aisling Grimlock mystery series: Grim Tidings, Grim Offerings and Grim Discovery.

What listeners say about Grim Beginnings

I bought the first book in this series some time ago and the other week I had run out of credits and decided to listen to it again, having forgotten what it was like, or maybe not having actually listened to it. Lee's basic idea is interesting enough so I wanted to find out what actually happened to Lily Grimlock, although the books are neither well-written nor well-performed. I hoped that getting the 3-book collection might give me enough information, and it did (although I still don't know why normal human beings can see the wraiths), but I'd really advise that you just don't begin to listen.

Despite the fact that every character is at least in her/his mid-twenties, there is only one character, Detective Griffin Taylor, Aisling's boyfriend who has the capacity to act like a mature adult, and he's not reliable. Everyone else (including Aisling's father, Cormack) swings between 8-year-old with impulse control issues and 15-year-old with impulse control and anger management issues. Without the descriptions of the childish arguments, temper tantrums and hair pulling, the three books could have been condensed into two, and the plot relies on having all the characters make the most stupid and irresponsible decision whenever they are given a choice. The stereotyping of Gerry, Aisling's gay best friend is really obnoxious, especially since Aisling is so aggressive about people making fun of him. There is no sense in which Aisling or anyone else actually *solves* the mysteries - they just stumble across answers by accident.

Karen Krause has a nasal whine to her voice (she reminds me very much of The Nanny) and a very limited range of voices (all four of the Grimlock boys sound more or less the same), some of which she struggles to maintain. This and the uniformly stupid behaviour of the characters makes it challenging to keep track of who is speaking.

Would you listen to Grim Beginnings again? Why?

Really great book, the only problem I have is all of the brothers sound exactly the same and they all sound extremely whiny. Its hard to imagine the description that they offer matching the voices. Ugg super hot guys that sounds like whiny chicks.

The Narrator Reads way too slow

Would you be willing to try another one of Karen Krause’s performances?

No, the characters are supposed to be snarky and sarcastic, I read the book but got this for a long drive since I had liked the story, the way it reads is faster paced. the way that she narrates though is more suitable for sloths not characters that engage in witty/sarcastic conversations

if you find yourself enjoying the story but annoyed by the her narration speed try setting the playback speed to 1.25, I found that by doing this it ends up sounding normal.

I enjoyed it! This story is full of sibling banter and unexpected twists and turns. The narration is excellent! The author did a good job with the character builds and plot. This was my first book by this author but definitely not my last. I look forward to reading more books in this series. I was given this free review copy audiobook at my request and have voluntarily left this review.

Slow start but it turns out to be such really wonderful books. I'm very impressed with the entire storyline.

This book contains gay/lesbian/whatever characters, which would have been nice to know right up front.

Aisling's twin brother is gay. I did appreciate how the author handled conveying that information. It wasn't so in your face. Aisling's roommate is also gay. This information was conveyed so badly I was left thinking the roommate had been a gay cross-dressing kindergartner. Aisling's dad hates the roommate and I can see why, the roommate addresses Aisling as "Bug".

Right at the beginning before the entire family was introduced, I liked Aisling. I thought I'd like to see her journey on learning the family business of being a grim reaper. Then the stereotypes started. Just as the first chapter is ending there's a joke about being Irish and drinking.

Then we're introduced to the family. We have the stereotypical overbearing father who runs things and expects to be obeyed. Aisling tried to stand up to her dad but after a little adversity she comes running home. We have her older, sex-obsessed brothers and then Aiden, Aisling's twin brother.

Such a cool premise but I just couldn't continue past the first book, even with the narrator who I enjoy listening to quite a lot.

Whiny stereotypical characters. The overall plot wasn't too bad but the overdone bickering and overdone gay stereotypes were annoying. A little of that can be fun but too much becomes tiresome. After the characters are known let's get on with the story.

The narration kills it.

I've read most of this series in e-book format. I was looking forward to the audiobook because Amanda M. Lee writes very entertaining family dynamics. This is true of most of her other series as well. Her family dinner scenes are so over the top I can't help but feel vicarious embarrassment for the characters. However, the monotone narration killed these hilarious scenes. I was so disappointed.

As for the story, if you don't like people being immature and making bad choices, don't buy this audiobook. There is very little emotional growth going on here; think Seinfeld. My only real problem with the story is Gerry's character. He's the book's SGBF (stereotyped gay best friend). Romance writers, please stop doing this!!

All around great book

It made me laugh out loud & it made me cry in silence! What a great book!

For the writer to choose this lovely old name, she should at least tell the narrator how to pronounce it. The Aisling Gray series by Katie McAllister is a good example of the correct way to use the name. It's grating to hear the nasally sound of A-is-ling, blech. "Ashling" is much better. Other than that the story is good so I've gotten the series, but if you ever update this, please change the name mispronounciation.