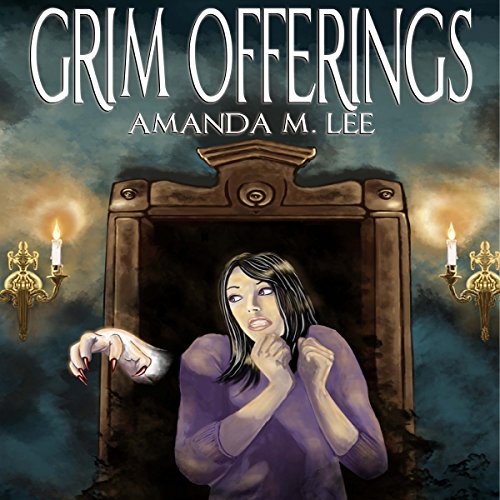 Grim and bear it.

Being a grim reaper isn't easy, but answering to family is even worse.

When a run-of-the-mill job goes awry, Aisling finds herself in a mess. The soul she was supposed to collect is still amongst the living, and the man who wanted to kill him is dead instead.

Detective Griffin Taylor is returning from an undercover assignment, and the first thing he wants to do is reconnect with Aisling. Her brother, Aidan, is giving him fits, though, and the rest of the family isn't making things much easier.

When wraiths start showing up again, and a member of the Grimlock family is seriously hurt, it's all hands on deck for the final showdown. Unfortunately for the Grimlocks, they can never do anything the normal way.

Aisling is chafing under worry and pressure, and her family is circling the wagons. It's going to take everyone working together to survive - and when the final fight is finally waged, a huge secret is revealed that will change the Grimlocks' world forever.

What listeners say about Grim Offerings

Amanda M. Lee is such a magnificent author and she does not disappoint with Grim Offerings. Characters are well deleveloped and we are taken further into their lives as the plot thickens and the story continues. Karen Krause does an excellent job at narrating Grim Offerings. I truly enjoyed listening as much as I did reading.

The first book in this series was not too bad, not great but a good story line. This 2nd book is terrible. It's like listening to one long bickering match between 12 year old's. The main character has somehow turned into a whining, weakling. The dialogue is horrible and the narrator only makes it worse. Do yourself a favor skip this one!

What was most disappointing about Amanda M. Lee’s story?

The woman bashing, even from the female characters, portrayal of the homosexual male charterers.

I like the premise of a family of grim reapers and the family business.

Gets better and better

Although I felt Aisling made ridiculous decisions, I have to admit this series get better and better. I can't wait to see how the story developed in the next book.

This is the second in what I hope is a very long series. The characters are quirky & unique, but also have depth along with all the hilarity. I can't wait for #3 to come out in audio & Karen Krause is on point with the dry wit & sarcasm.

Loved the book. Not the narrator.

Would you try another book from Amanda M. Lee and/or Karen Krause?

I love the Aisling Grimlock books, but the narrator of the audiobooks is terrible.

Yes. Given there was so much the main character didnt know, the listener is also kept in the dark. It got to a point where I just had to know the answers to the questions that kept building up.

I didnt really like her tone and the rate at which she was reading. It seemed almost slurred, slowing down the pace of the book.

Could you see Grim Offerings being made into a movie or a TV series? Who should the stars be?

I don't see it being made into a tv series.

What disappointed you about Grim Offerings?

The narrator most definitely. I wish it wasn't so obvious that she is reading and her transitions from character to Ainsline are rough. It sounds like a cold "read through" in both books.

If you’ve listened to books by Amanda M. Lee before, how does this one compare?

This is a cute story.

Other narrators perform, Ms. Krause just reads, but I know it will get better the more practice she gets.

What character would you cut from Grim Offerings?

No one yet, I don't agree with mom coming back. I think the storyline will get to heavy.

The story was great, but the main female character needs to chill out. Her impulsive nature gets old very quickly,but with that said when all the characters are combined this book is quite interesting

This series just gets better and better. Loved it! The story was very entertaining and the characters are wonderful.

This is the second book in the series and it's better than the first. Sometimes that happens because you have to get into the characters. I'm looking forward to getting book 3.

I found the second book of the Grimlock family saga as enjoyable as the first. The problem that continues to plague these audible books is the narrator. I'm sorry folks but she has a voice that is like fingernails on chalk to me. I've decided to do the third book by Kindle because my ears simply can't take her lack of talent any longer. The story however was wonderful, proving once again why Ms. Lee is one of the queens of urban fantasy!