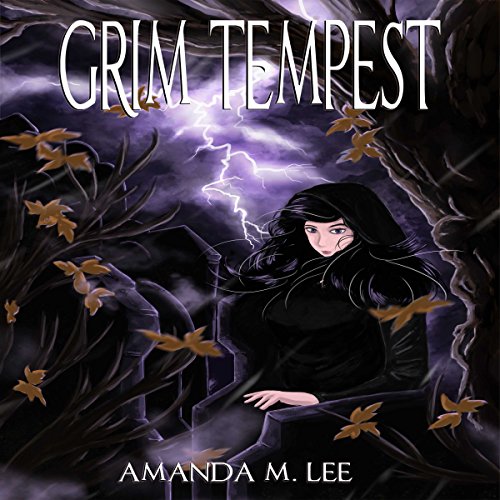 Life should be good for Aisling Grimlock. She’s engaged to a great guy, she’s getting the hang of being a reaper, and her rich father spoils her rotten on a regular basis. All that changes when a series of storms hits and the Michigan populace starts turning downright dangerous.

The streets are running with blood as people turn on one another for no good reason, and the hospital is filling up with the sick and injured. That’s on top of the ones who are dying in terrible fashion...and leaving nothing but angst in their wake.

Right from the beginning, Aisling is convinced the storms are magical in origin. Of course, because she’s prone to theatrical fits, no one believes her...until the storms hit a little too close to home, and Aisling herself is in danger from the one person she trusts above all others.

As a cop, Griffin Davenport is used to putting his life on the line. What he’s not comfortable with is being a threat to the people he’s supposed to be helping. The storms, you see, don’t affect reapers, but those they love are in a heap of danger.

Aisling is determined to find the source of the storms, even if it leads to someone in her own family. She’s willing to claw, scratch, and fight until the danger is eliminated. She’s also willing to whine, cajole, and beg if it means she gets her way.

A big fight is coming, and it will be under a cloudy sky. Will the Grimlocks live to reap another day, or have they finally found an enemy big enough to take them out?

What listeners say about Grim Tempest

Amanda M Lee does it again. Love anything with the Grimlock family! Can't wait for the next book in the series.

I love this series. The dialogue is witty, humorous, annoying and smart. This book is like visiting family. The plot is fast paced and entertaining. I love the interactions between Aisling and the other characters. I've read other books by Amanda Lee but this one is my favorite.

Wow. Love it. Can't get enough. Waiting to go for a ride to hear more.

Amanda M Lee is one of my most favorite authors. Her characters are well developed, interesting, fun, and always memorable. Her stories are clever, witty and worth listening to.
Aisling is one of those you can't get enough of. She's clever, loyal, a little snarky, and always right about her instincts.
Gotta love the "I'm Right" dance.
This time she's determined to find the out why the storms are having strange effects on those close to her. You'll not be bored as she tries to find her answers. Gotta love the “I'm right” dance.
I so want to be adopted by her dad or be the Aunt that comes to visit and stays. Oh yes, Omelet bars, Ice cream bars...

We are hearing (and enjoying) all about Aisling and and Griffin.
I would love to hear about her Mum and Da. When and where did they first meet? Did they "have" to get married and; who approached whom? Wid what to whom. Was Lily a "pure blood" Grim? Was there going to be any additional pitter-patter of little Grimlock feet before Lily "died" to be any addional little Grimlock
I can think of 100 questions without even trying hard.

Come on, Amanda. Let's have some fun.

Amythyst.
P.S. Aisling and I have a lot in common. haircolour
eye colour.

I really enjoyed this book the best. It lightly went into the history of them without spending too much time on that. Enjoyable!