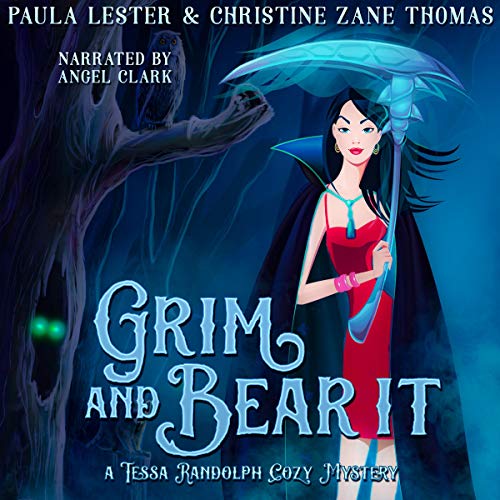 Grim and Bear It

A grim first week on the job.

Tessa Randolph is feeling defeated. On the outs with her boyfriend and suddenly without a job, she's scrambling to pay the rent. She doesn’t exactly have the kind of life she wants. Tessa needs a change. And the ability to afford the wet food her cat Pepper thinks she deserves at every meal.

Against her better judgment, but without a better offer, Tessa takes a job from one of the scariest of bosses - her mother, who has a deadly sharp tongue. And just like that, she learns that the life insurance agency at the edge of Mist River isn’t what it seems to be. Plus, Cheryl Randolph isn’t simply the sharp-tongued, overly critical mom Tessa thought she was. She’s a grim reaper. One of many people tasked with escorting souls into the afterlife. And now Tessa is one, too. She wasn't expecting her life change to involve so much death.

Tessa intends to simply kill it in her new career. But, running late on her second day of work, she doesn’t make it in time for her neighbor’s death. And now his soul is missing. Apparently, that's not a good thing when you're in the soul-collecting business. Who knew?

Now, her mom-boss thinks Tessa can’t cut it. Which is just so typical. And she doesn’t seem to be telling Tessa everything about an important death in both of their pasts. Not only that, but apparently, if Tessa doesn’t find the missing spirit fast enough, its absence will rip some kind of apocalyptic hole in space and time. Or something like that. It’s all a bit vague. Not that Tessa read the job manual line by line. Who has time for that? What’s worse, the police think Tessa might've committed the murder.

Can Tessa prove her innocence? Can she get her mom off her back and find the wayward soul before time runs out? And will Pepper get that expensive can of tuna she's sure she deserves?

What listeners say about Grim and Bear It

A different kind of cozy mystery

Tessa struggles with her new job as a grim reaper - with her controlling mom as her boss.

I enjoyed this story very much. As a reluctant reaper, Tessa's struggles with the job were amusing. I could easily picture her office, the apartment, the casino, and Linda, her ancient and recalcitrant car.

My only disappointment was the narrator. She overpronounced her words, making the narration feel stilted. She did a good job with dialog and I could easily tell who was speaking.

Overall, it was a pleasant listen and I look forward to the next book in the series.

I received a code from the author but this in no way affected my review.

I wouldn’t go out and jump head over heels for this book, but I am willing to check out the next installment. I liked the idea of a “Grim Reaper” agency in lieu of the creepy dark black robe with bones and a scythe. The book was upbeat and added a modern take on being scooped up for the after life. Enjoy meeting the main character and her clumsy ways!

The story plot was great and enjoyed the book over all but the narrator left something to be desired . I would like to get more books but I'm hoping for a new narrator.

Nice twist to character roles and building of a series. Will be nice to see where it is taken.

I have to say Tessa was a hoot. Love the real life troubles that flow over to her Reaper job. Fun read with mystery and humor.