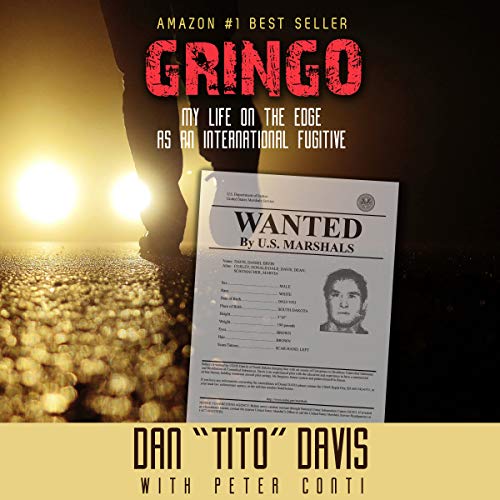 Gringo: My Life on the Edge as an International Fugitive

Dan “Tito” Davis is the ultimate survivor. Having been an international fugitive for over 13 years, and across more than 54 countries, Tito had evaded the tough, three lettered trio of the F.B.I., C.I.A., and the D.E.A., and then, for good measure, the U.S. Marshals, Homeland Security, U.S. Customs, Interpol, local law enforcement agencies, immigration agents, mercenaries, guerrilla organisations, professional kidnappers, career hit-men, vigilantes, human traffickers, and most other entities worth being wanted by.

Through the various chapters of his life, Tito dealt with the Bandidos Motorcycle Club, invented the “Red Bull” of the day, lived, laughed and loved with the Medellin cartel, negotiated the deadly Darien Gap, weathered three weddings, had plastic surgery to alter his appearance, owned a resort in Venezuela, attended school with third graders, looked down a few gun barrels, piloted jet airliners, won a national kite surfing championship, racked up a few million dollars, made some enemies and a heck of a lot of friends.

What listeners say about Gringo: My Life on the Edge as an International Fugitive

Not What I Thought

Listened to the sample, sounded interesting so I bought it. Tried giving it a go, but... I less than half way through and can't go further. It's very slow. Slow and dry. Uneventful. And again, very very slow. Definitely not for me.

This book is a Must Read for everyone who loves non-fiction, I read it from front to back, non stop!!!

Literally couldn't put it down!!!!

What an unbelievable, entertaining life this GRINGO has lived.

Being from South Dakota, my father & Uncle were friends with Dan Davis.. I personally knew Dan as a young boy and was a 19 years old when I last saw him 30 years ago. Dan thank you for sharing you the rest of your story… ONE CRITICAL ISSUE: I wish they would of used a different narrator. His monotonous voice used to tell Dan’s colorful story. Horrific.. however the story outweighs the Milquetoast narrator.

Narrator did not fit with the book. It’s too bad, it could have been great

the narration is so awful. it sounds like arrogant, smug exaggeration. don't waste the credit!

Great bio regardless how you feel about the person and his actions. Always great listening to peoples stories and what turned them into what they became despite choices dealt in life.

I listened to most of this in the car during a road trip. The narrator drove me nuts speaking with the voice inflection of a news caster and then trailing off to near inaudible sighs at the end of a sentence and all of a sudden starting a new sentence or clause with the volume of a used car sales commercial in the same breath. I kept having to turn the volume down and up depending on the force of the point the author was trying to make, which brings me to the story. The first quarter is about drug smuggling, the remainder is about hanging out in South America and hoping he doesn’t get caught. I get it, he lived an interesting life, but I don’t think the subtitle really lives up to the subject matter.

Narorator is dry, story is drawn out, way too long. Much better ones out there.

What a fascinating story!! Dan “Tito” has had a very interesting life and the book explains it very well. The narration is very well done as well.

Fascinating story and all in all a very interesting listen. My only complaint is to say the end is somewhat abrupt would be an understatement. I think it would have been better had he kind of explained, for better or worse, what that experience and subsequent arrest had done to his current life situation. It is just basically “I got arrested, I tried to get my legitimately acquired assets back, no dice. Audible hopes you enjoyed this program.”