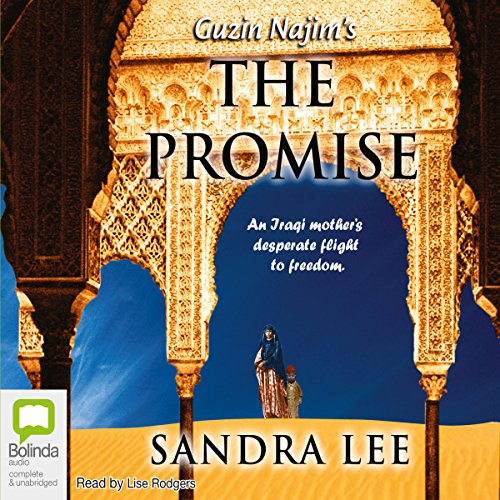 Written by: Sandra Lee
Narrated by: Lise Rodgers
Try for $0.00

"The first week I arrived in Australia, I went to the Opera House and the Sydney Harbour Bridge. He always wanted to go there. And I said, 'I hope you will see me. Your children are safe. I will be faithful to you....We will always love you.'"

When Guzin Najim met Ra'ad Said at university in Baghdad, she knew she had found the love of her life. After a traditional Iraqi wedding, their world became the international diplomatic circuit. The arrival of their two children, Lina and Mohammed, made their happiness complete. But then Saddam Hussein came to power and their world changed.

On the eve of the first Gulf War, Ra'ad was recalled to Iraq and sent to work at the Foreign Ministry in Baghdad. One day his limp body was dragged from a government car by two of Saddam's henchmen. He was burning with fever, his eyes bloodshot. As he gasped for air, tears streaming down his face, he made Guzin promise to take their children out of Iraq and never return. Four days later, Ra'ad was dead, murdered by the brutal regime he was forced to serve.

Only Guzin's love for her children gave her the strength to face what was to come. Placed under house arrest, the family endured a relentless campaign of terror, until a chance at freedom came and they fled across the desert in a daring overnight escape. Guzin stepped off the plane in Sydney knowing that risking everything had been worth it: and her promise to Ra'ad would be honored.

This is a first hand look at the brutality of Saddam and his men. It was a great audio. I recommend it to anyone interested in learning about this period in time.